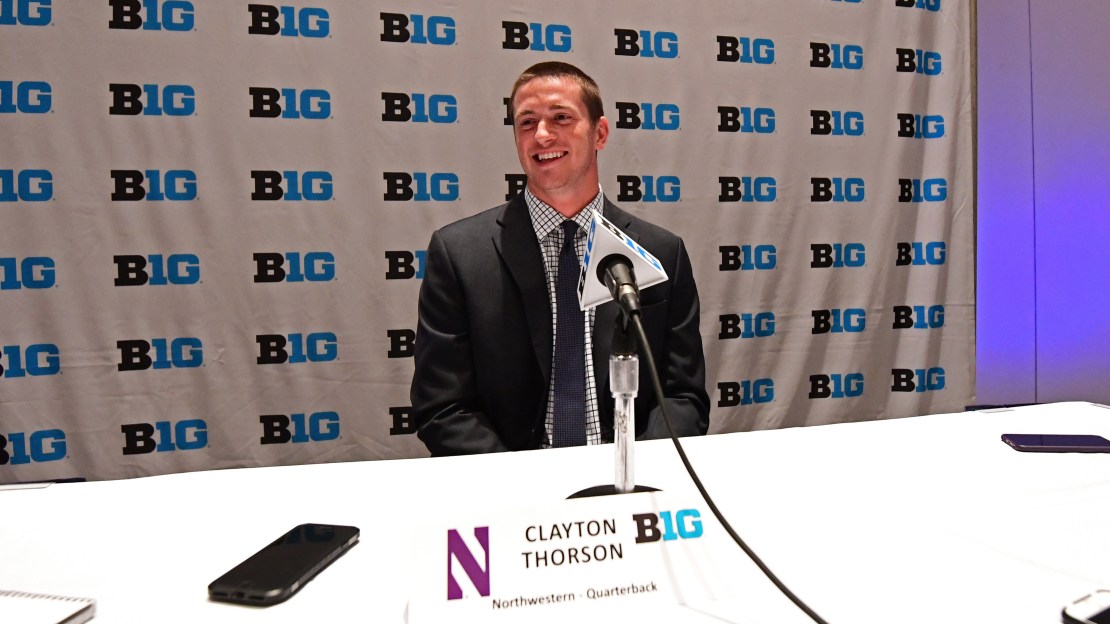 Has it really been 22 years since Northwestern stunned the football world, won the Big Ten and played in the Rose Bowl?

That 1995 campaign was one of most shocking and exciting seasons I can recall in recent college football history. Don't be shocked if the Wildcats win the Big Ten this year. At the very least, this team has a good shot to win the West and play in the Big Ten title game.

Back in 1995 under Gary Barnett, NU was a national darling led by an overachieving linebacker named Pat Fitzgerald. I still remember Northwestern opening the season by waltzing into Notre Dame and knocking off the No. 9 Fighting Irish, 17-15. That got everyone?s attention. But most forget the Wildcats lost the next week at home vs. Miami (Ohio). Nonetheless, Northwestern got back on track the next Saturday vs. Air Force and never looked back in winning nine in a row in one of the most improbable Big Ten seasons in the last 50 years. Who could forget the work of QB Steve Schnur and RB Darnell Autry?

The Wildcats proved that magical 1995 ?Take the Purple to Pasadena? season wasn?t a fluke by winning the Big Ten in 1996 and also in 2000, when Randy Walker used a cutting edge quick-paced offense to push Northwestern to a three-way tie for the conference championship. Who could forget the work in 2000 of QB Zak Kustok and RB Damien Anderson?

That was 17 years ago. Now, the 2017 Wildcats look like one of Fitzgerald?s best teams since taking over in haste following the sudden death of Walker in 2006. That hope begins on offense with as good a quarterback-running back tandem as you?ll find in the Big Ten in Clayton Thorson and Justin Jackson.

Thorson came of age last season as a sophomore. He is 17-9 as a starter after tossing a school single-season record 22 TD passes in 2016. Jackson is primed to become NU?s all-time leading rusher as he enters his senior season. He is the only back in school annals to run for 1,000 in each of his first three seasons. Jackson lacks flash and dash, but he?s a blue collar workhorse who gets the job done.

And what?s neat is that like Fitzgerald, both Thorson and Jackson are from the Chicago area, a region that is the emphasis of NU?s latest marketing campaign.

?I'm very proud to be a Chicagoan,? said Fitzgerald.? I'm very proud of playing at Northwestern and being from Orland Park. I think it's a pretty cool campaign, especially with you look at our two superstars in the backfield with Clayton and Justin both being Chicagoans, and Chris Collins being from Chicagoland too.?

The defense also teems with potential. Yes, stud Anthony Walker is gone a year early from a linebacking unit that has something to prove, but there is plenty of talent up front and in the back end. Rarely has NU had this much speed, depth and athletic ability on defense. Coordinator Mike Hankwitz may use a 4-2-5 alignment often, taking pressure off the linebacking group. Nate Hall and Brett Walsh should be key contributors along with Nathan Fox and Paddy Fisher.

?I like the core (at linebacker),? said Fitzgerald. ?I like what I've seen from Nate Hall. As I look at what Brett Walsh has done throughout his career, I think Brett right now is our leader in that room from the standpoint of what he's not only overcome throughout his career from an injury standpoint but also the production he's had. And the game that Nate Hall has, I think he's really dynamic and special athlete.?

And Warren Long was moved from the offensive backfield to the linebacker to bolster depth. Jango Glackin has had a really good offseason, too.

?We'll see how things progress with the group," Fitzgerald said. "As we sit here right now, that's going to be a great competition between Nathan (Fox) and Paddy (Fisher), and we'll see how that unfolds as camp goes on.?

And it won?t take long to see how NU?s season may unfold, as the Wildcats? Big Ten opener is at Wisconsin on Sept. 20, the pick of most pundits to win the Big Ten West. That game will go a long way to shape the West division chase. After that trip to Madison, the Wildcats welcome defending Big Ten champ Penn State. No league school opens conference play with a more daunting 1-2 punch.

?We always focus on getting better each day,? said Jackson. ?If we do that, things will take care of themselves. This could be a fun season.?