7 most difficult stretches of games. Is your school on the list? 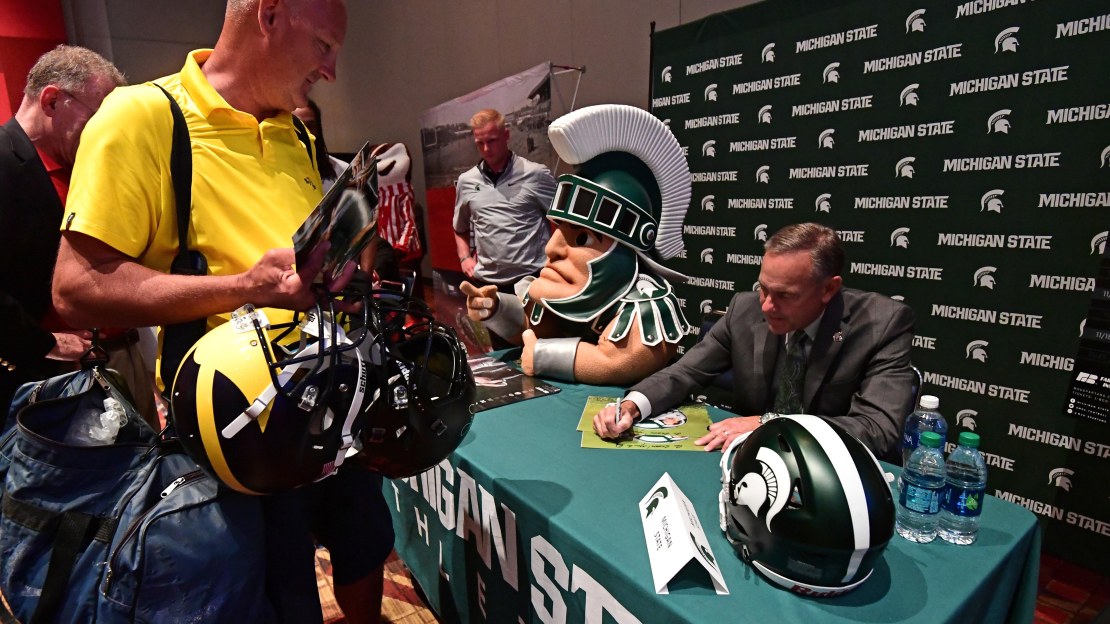 Ask any coach, and he?ll tell you: It?s not who you play, it?s when you play them. And if you?re playing a series of hot teams in succession, it could torpedo your season.

Having typed that, here are seven of the toughest stretches of games Big Ten teams must play (listed in alphabetical order).

The Hoosiers will be tested severely from Sept. 30 to Nov. 4, playing at Penn State, vs. Michigan, at Michigan State, at Maryland and vs. Wisconsin. Can Indiana win any of those five games? If IU can go 2-3 in that stretch, it would be a success. The Hoosiers are 1-19 all-time vs. Penn State; the lone victory came in 2013. IU is 9-56 vs. Michigan, losing 21 in a row. The last IU win? It was in 1987. Indiana toppled Michigan State last season, taking a 24-21 decision in Bloomington to claim the Old Brass Spittoon for the first time since 2006. The Hoosiers are 2-1 vs. Maryland since the Terps joined the Big Ten, winning the last two. IU has lost nine in a row to Wisconsin.

The season ends with a tough 1-2 punch, as Michigan plays at Wisconsin and then finishes at home vs. Ohio State. The Wolverines and Badgers have met just one time since 2010, with Michigan taking a 14-7 decision last year in Ann Arbor. The schools haven?t met in Madison since 2009, as Wisconsin took a 45-24 win. In fact, UW has won the last three vs. Michigan in Camp Randall Stadium, where the Wolverines last prevailed in 2001. The Buckeyes have dominated Michigan of late, going 14-2 in the last 16 meetings. The Wolverines? lone wins have come in 2003 and 2011.

Fresh off an unexpected 3-9 campagian, Michigan State has a pair of grueling three-game stretches that could go a long way in determing its season. Which one is more challenging? It's close, but the second three-gamer includes tests vs. two of the most popular picks to win the Big Ten East, including a road date at Ohio State.

The last five games figure to make or break Minnesota. The run begins Oct. 28 with a trip to Iowa followed by a game at Michigan. The Gophers come home to play Nebraska before trekking to Northwestern and then finishing at home vs. Wisconsin. Iowa has dominated the Floyd of Rosedale series with Minnesota, going 12-4 in the last 16 encounters. The Gophers have won the Little Brown just two times (2005 and 2014) since 1986, going 2-23 in the last 25 meetings with Michigan. Minnesota is 2-4 vs. Nebraska since the Huskers joined the Big Ten. The Gophers have won three of the last four vs. the Wildcats. But Minnesota hasn?t won Paul Bunyan?s Axe from Wisconsin since 2003, losing the last 13 meetings and 20 of 22 since 1995.

The Buckeyes have a rugged three-game run from Oct. 14-Nov. 4 when they play at Nebraska, vs. Penn State and at Iowa. This will be the Buckeyes? first trip to Lincoln since 2011, when NU won 34-27. Ohio State has won the last two vs. Nebraska in dominating fashion, taking a 62-3 decision last year in Columbus and a 63-38 outcome in 2012 in Columbus. Last year, the Nittany Lions were the only team to beat Ohio State in the regular season, shocking the No. 2 Buckeyes 24-21 after Grant Haley ran back a blocked field goal 60 yards for the winning TD late in the fourth quarter. Before that, OSU had won four in a row vs. PSU. Iowa and OSU haven?t met since 2013. Ohio State has won the last five meetings. The Hawkeyes? last win? A 33-7 romp in Iowa City in 2004. Before that, Iowa hadn?t toppled the Buckeyes since 1991.

The Nittany Lions? hopes to repeat as Big Ten champs will be put to the test by a daunting four-game stretch from Oct. 7-Nov. 4, when they play three of four games on the road. The run begins with a trip to Northwestern, which could win the West. That?s followed by a visit from Michigan and then a trip to Ohio State. The stretch ends with a game at Michigan State. The Wildcats have won the last two vs. the Nittany Lions. Before that, PSU won six in a row vs. NU. Penn State beat Ohio State in 2016; before that, OSU had won four in a row vs. PSU. The Wolverines have won the last three meetings vs. the Nittany Lions, including a 28-16 victory in Beaver Stadium in 2015. Penn State will be motivated to reverse the tide in this series, as it tries to defend its Big Ten title. Penn State won the Land Grant Trophy from Michigan State last season but lost the previous three vs. the Spartans.