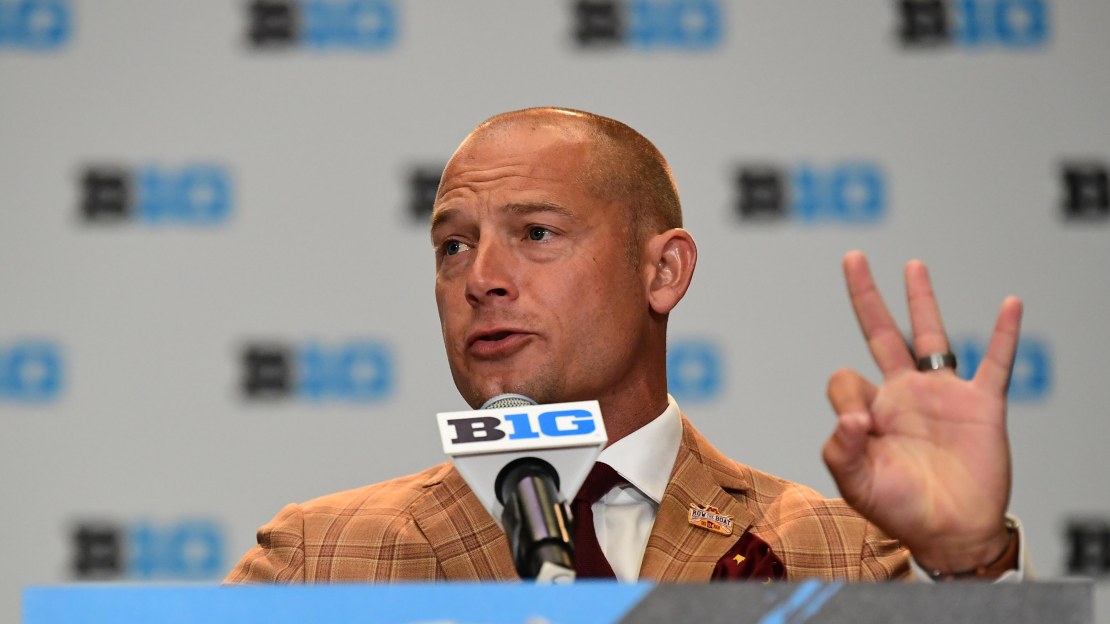 CHICAGO — Look at P.J. Fleck! He?s indomitable in spirit. There can?t be anyone walking this planet with more bounce in his/her step. No. Way. And stamina? You can?t exhaust his. He lives life in fifth gear. Fleck walks fast, talks fast and thinks fast. He probably sleeps fast, too. Fleck can?t help it. It?s how he?s wired.

So, what?s it take to hang with the new Minnesota coach? Lace up your Skechers, take a swig of Vitamin Water, stretch your hamstrings ? it?s time to go with Fleck on his first run through Big Ten media days!

6:35 a.m., Tuesday
Phillip John (P.J.) Fleck bounds off an elevator and into the lobby of the McCormick Place Hyatt. He?s ready for a run. Fleck is wearing a red Manchester United shirt, shorts and Nike shoes. He looks like he could still catch passes for Northern Illinois, where he first began turning heads as a try-hard, overachieving runt wideout under Joe Novak from 1999-2003. Try to find any fat on the 36-year-old. You can?t. He says he weighs 180. Believe him.

Began the day with a brisk Chicago jog with @Coach_Fleck. Have to admit: It was difficult to keep up! pic.twitter.com/RaTeTtaDqo

Fleck keeps a good pace on this glorious Chicago morning jog as he heads toward Lake Michigan. On the way, he passes a group of women in an exercise group doing some stretching.

It will be first of what seems like 2,145 times Fleck will say ?elite? on this day. Don?t be alarmed. It?s his favorite word. It?s the word he defines himself by. If you think and act elite then, well ? you know.

Fleck is a confident person who has brought a personality, brand and identity to Minnesota. He believes in himself and what he preaches. And he knows it works. Witness his stellar four-year run at Western Michigan that netted him this job.

?Look, I?m the ?King of Toos,? ? he loves to say. ?Too slow, too short ? you name it. I was challenged from the start and always was pushed hard by my father.?

Fleck recounts his childhood in suburban Chicago as commuters zoom by on Lake Shore Drive. (He?s a Cubs fan, if you have to know.) Fleck was born in Berwyn and is a grad of Kaneland High in Maple Park, Illinois. His mom worked in special education and his dad was a police officer and later worked for AT&T.

?One time, some kids ripped up some of my baseball cards, and I came home and told my dad,? said Fleck. ?He wasn?t going to do anything about it. He told me to go back and take care of things myself. How many parents would do that today??

The hotel is in sight on a sun-splashed late-July Tuesday, and Fleck picks up the pace. He starts most every day with some type of exercise. Jogging. Lifting weights.

?Before I leave for the office, I write notes to my kids and wife Heather. Every day. And when I get to the office, I like to light a candle and read for a bit. It?s one of the few, slow quiet times each day before things start to go crazy.?

7:35 a.m.
Fleck comes dressed to impress. He?s sporting a tailor-made Minnesota maroon suit that is impossible not to notice. As an added touch, Fleck wears socks with little states of Minnesota on them. Nice touch. Fleck EASILY is the best-dressed coach on this day.

?I call this my Sid Hartman jacket,? says Fleck, a nod to the legendary Minnesota sports writer. (Watch Fleck talk about the suit.)

Fleck moves quickly toward a ballroom to do the first of many TV interviews on the day. He is ushered by Minnesota sports information director Paul Rovnak, who takes him to an interview with BTN.

?Hello, I?m P.J. Fleck,? he says, extending his right hand and introducing himself to the producers in the room. As if they didn?t know who he was. The energy level quickly picks up in the room.

You can tell Fleck likes this. Why not? He?s a natural in front of a camera, at times a bit cartoonish. The questions come fast, as Fleck address an early-signing period, his love of the water and Minnesota?s rivalry with Wisconsin, among other topics.

?We have to bring the Axe back to the Twin Cities,? he says, referring to Paul Bunyan?s Axe, which is the prize in the Minnesota-Wisconsin series.

Fleck is off. It?s difficult to keep up with him. His pace working the expansive hallways of McCormick Place would cause the chest of an Olympic power walker to heave.

8 a.m.
Fleck studies a cluster of notes as he walks down a back ?authorized personnel? hall. He?s up first on this day to address the media horde. And if anyone holding a pen is sleepy, Fleck?s blare and bombast no doubt will wake them up. Fleck is the picture of calm as he sits on a couch off stage and preps.

?I?m just going over some things I want to say,? said Fleck. ?Just some talking points.?

This will be the largest collection of media Fleck will have addressed. Finally, he is summoned. It?s time to hit the dais. Fleck ducks through a black curtain and slides behind the lectern. It?s show time.

?Good morning. I'm not sure if this was by design to make me go first by waking everybody up. I do want to start by this: Just want to say hi to my kids - Gavin, Carter, Paisley and Harper - at home. They're watching right now. Just want to say hi, and, Harper, quit hitting your sister. Please don't do that anymore.?

Fleck referenced his children often on this day. Along with Heather. He makes no secret of his love and affection for his kids and wife. And time and again, Fleck talks of Heather?s influence on him.

8:42 a.m.
Fleck is off to another faceless ballroom to talk to a camera crew. This time, it?s ESPN. And Fleck is on a roll talking about player safety, the college football playoff and even what he dressed up like for Halloween as a kid.

?I was Jim McMahon for five years,? Fleck says. ?I had the head band and everything. I was the punky QB.?

Fleck loves to use his hands when he talks. He motions up and down. He points. He clasps them for emphasis. At one point in an interview, he makes a fist and mockingly punches his chin to make a point.

And then there is his voice: It fills the room. Ask him a question, and it?s like turning on a fire hose. The words gush with velocity and volume. At one point, Fleck is asked to say the classic Minnesota phrases for the camera: "You betcha!" "Minne-soda." It's spot on.

Fleck couldn?t be more different the man he replaced, Tracy Claeys. Fleck is hip, slick and cool, at one point mentioning Drake and Kanye in an interview. If Fleck is Red Bull, Claeys is a glass of tepid water. But can Fleck extract nine wins out this season?s team, which is the number Claeys had last season?

?I never talk about win totals,? Fleck says. ?We will win, but it?s a daily process.?

Heather meets Fleck in the hallway, dressed smartly. Mr. and Mrs. Minnesota, the ultimate Gopher power couple. They exchange a kiss and hold hands as Fleck heads to his next interview.

9:02 a.m.
Fleck walks into TV interview No. 3. But, by the way he conducts himself, you?d think it was his first one of the day. Many of the questions are the same. But Fleck answers with gusto like he never has been asked any of them before. Among the queries: What does ?Row the Boat? mean? It?s the mantra Fleck used to build Western Michigan into a nationally relevant program, and he brought it with him to Minnesota. If he can make Western Michigan matter, what could he do in the Big Ten? You see the possibilities? The wonder?

?Row the Boat?s meaning extends well beyond football,? says Fleck. ?It?s really a life philosophy. I was an elementary education major. I loved ancient Rome. I like teaching about life. And Row the Boat is about many things, including never giving up.?

Fleck is off again. He spies a Purell dispenser and quickly shoots some into a hand and rubs it in.

?I can be a little OCD,? he says. ?Neat and clean. I hate disorganization. I like things in their place. Our house is like that.?

Did you notice Fleck?s hair? Or lack thereof? It was the result of wager with Heather, he fesses. But Fleck won?t say what the bet involved. Only that he also talked his two sons into shaving their noggins, too. P.J.?s power of persuasion strikes again. Those kids had no shot.

"Some of the greatest coaches in the world are in this room, and it's an honor to be here." – @Coach_Fleck on first #B1GMediaDay pic.twitter.com/rLezuX5cC0

9:30 a.m.
Fleck is the Energizer Bunny. He is going ? and going. He loves this stuff. Remember: This is the guy who eats difficult conversations for breakfast. A smile quickly creases his face as he spies Brady Brohm, the young son of new Purdue coach Jeff Brohm.

?How ya doing, Brady? Good to see you!? says Fleck. Brady smiles as they bump fists.

Next up: A stint on SiriusXM radio with Chris Childers, Rick Neuheisel and A.J. Hawk. At one point, Heather slips on a headset to join in the back-slapping patter. Fleck is talking about how ?the dream is in the journey, not the destination. Heather told me that.? And ?cultural stability? is a big topic, too.

?We look forward to bringing that culture of sustainability over a period of time,? Fleck says. ?We look forward to developing our players to an elite level, academically, athletically, socially, and spiritually on a daily basis, and keep doing our best and rowing the boat every single day.?

?How are you doing?? Fleck asks a fan as he hustles up an escalator hand-in-hand with Heather.

Fleck navigates a thicket of people and finds his place at the Minnesota table. Some fans quickly approach for a quick word with their new coach ? and a selfie. Gotta have a selfie with P.J. Fleck, right?

Life is good for Fleck. He knows he?s still in the honeymoon phase. But he knows he has work to do. It?s time to go to the Kickoff Luncheon.

?Have an elite day and Ski-U-Mah!? Fleck says to a fan as he leaves the autograph table.

The fun continued in the afternoon, post-Kickoff Luncheon, too. Just after 4 p.m., it was time to visit with BTN kid reporter and media days star Molly. "That was the coolest thing I've ever done," said Fleck, as he walked to his next stop: the BTN marketing room. Before finally calling it a day, Fleck was nice enough to read some mean tweets.