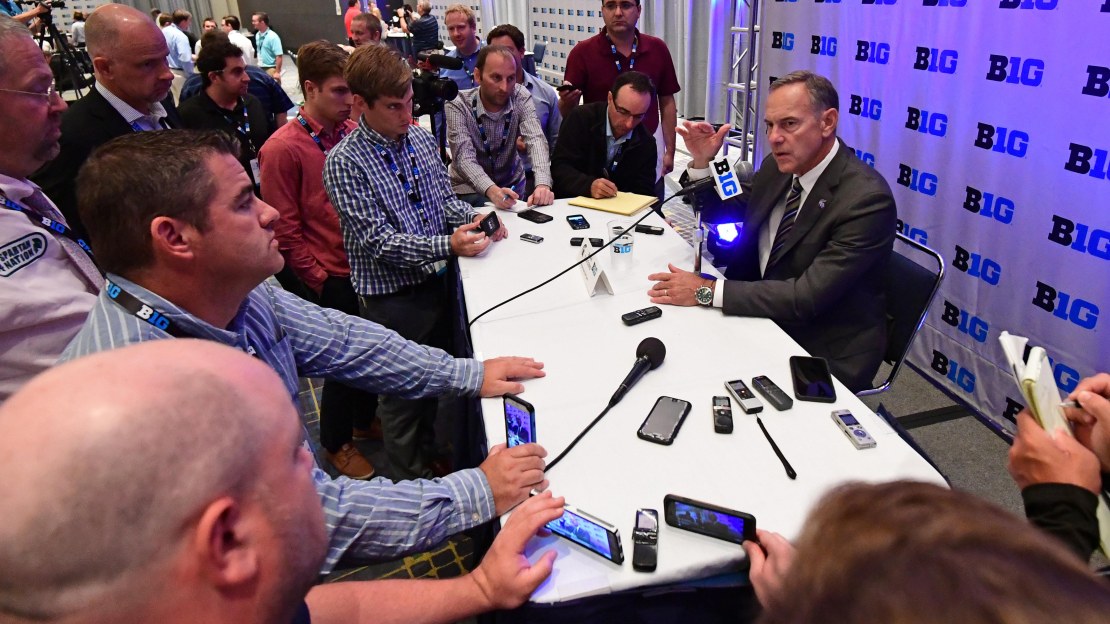 CHICAGO — Day 1 of Big Ten media days came and went Monday, and here are several news and notes as we prepare for Tuesday's festivities.

FRIDAY NIGHT IS NOT ALL RIGHT
When the league announced it would play some games on Friday nights, there was reluctance-and flat out refusal by some schools like Michigan and Penn State-to not play on Friday. Northwestern also wiggled out of two Friday night games. The subject came up again today.

?I think it's fair to say there's been pushback,? said Big Ten commissioner Jim Delany. ?It led us to open up even more communication with the high school directors. We do have some, what I would describe as non-Labor Day Fridays. We have two of them. We've been doing Labor Day Friday for a number of years, probably since the middle of the decade, maybe around 2006 or so. That never really created a lot of controversy.

?And we actually thought that with, I think, eight of the ten FBS conferences telecasting a little bit on Friday that that would be okay. But we did get pushback.

?We've worked to mitigate by very early selections. I think you'll see selections probably in October proceeding the season, number one. And number two, to work with the high school athletic executive directors to mitigate.

?So this year we have two games that are Friday non-Labor Day, Ohio and Purdue and Nebraska and Illinois. So we'll continue to work with people to try to mitigate any negative impact in that area.?

BIG TEN DEAN
It may be difficult to believe, but Iowa?s Kirk Ferentz is entering his 19th season leading the Hawkeyes. That makes him the longest tenured coach in the nation now that Oklahoma?s Bob Stoops has stepped down. Before Ferentz was tabbed, Hayden Fry led Iowa for 20 years (1979-1998). So, if you are keeping track, the Hawkeyes have had two coaches since the Jimmy Carter administration.

?Oh, you know, I haven't spent a lot of time thinking about it,? said Ferentz. ?Bob's a really, I think we consider each other to be good friends. Bob was a player at Iowa when I got there in 1981. He was a junior and a captain on the '82 ball club.

?Now I feel very, very fortunate. ?This will be my, I guess, 28th year at Iowa, and feel fortunate that in 1981 I somehow, some way I ended up there as an assistant.?

The next longest tenured Big Ten coach? It?s Northwestern?s Pat Fitzgerald, who is in his 12th season in Evanston. He?s followed by Michigan State?s Mark Dantonio, who is his 11th.

NEW SHERIFF IN INDIANA
No Big Ten coach is as personable and ebullient as Indiana?s Tom Allen. And he will be under some scrutiny as he takes over for Kevin Wilson, who was at the helm for six years.

Allen is the Hoosier?s sixth coach since Bill Mallory stepped down after the 1996 season. And it hasn?t taken him long to put his stamp on the program, as he totaled changed the offensive staff. Can IU remain as potent on offense as it was under Wilson?

Allen said he mentioned the numbers 50, 26 and 100 to his players and staff. And none were aware of the significance.

?We're going to accomplish all three of those, I told our team. If you don't believe that, you need to leave. Said the same thing to our staff. I love them. I appreciate them. But I want a coaching staff, I want a football team that believes.

Allen played the same exercise in his first meeting with his defense over a year ago.

?I wrote the letters L-E-O on the board,? said Allen. ?I asked them once again if they knew what that meant. They didn't. Stands for Love Each Other. Didn't talk about football. Didn't talk about schemes. It was about changing the mindset and the culture of that side of the football.

?To me, it was about getting our focus off ourselves, building trust, developing a culture that says it's not about "me," it's about "we."

FCS GAMES A-OK
Previously, the Big Ten didn?t want its members to schedule FCS foes so league schedules would be strong when it came time to build a College Football Playoff resume. And it also was to have schedules that were attractive for its TV partners.

But now, Big Ten commissioner Jim Delany will allow teams to play FCS foes on years when a conference squad has just four Big Ten home games due to an imbalanced nine-game league schedule. Don?t expect every league school to begin scheduling FCS foes, but games vs. ?little guys? figure always to have a place on the schedules of some Big Ten schools.

?We have modified,? said Delany. ?And what we will do is allow our schools at least the opportunity to schedule an FCS game in years where they have four conference games. So we won't have more than seven - a number of schools indicated they won't be taking advantage of that opportunity. But I expect we'll have three or four.

?If you look at the national landscape, we have a number of conferences that are 13, 14, 15 games. So we'll probably still have the least number, but we'll probably have a moderate number in the area four to seven going forward.?

There are just two games vs. a FCS foe this fall: Towson at Maryland on Sept. 9 and Morgan State at Rutgers on Sept. 16.

MICHIGAN STATE MYSTERY
If there?s a mystery team in the Big Ten, it?s Michigan State. How good are the Spartans?

Michigan State was one of the most vexing and disappointing teams in Big Ten, going from a Big Ten championship and playoff squad in 2015 to plummeting to 3-9 last year with plenty of off-field tumult.

?I sense the togetherness on our football team,? said MSU coach Mark Dantonio. ?I sense a sense of responsibility. We've had an outstanding summer bottom-line conditioning program is what we call it, the bottom line. And I think we're poised for the next challenge.

?There will be challenges along the way. I don't think there's any question about that. But we established ourselves as a championship program inch by inch. There was nothing ever given to us. And that's how we've handled it. That's how we've taken it. We have to go back to that mindset, understand that things don't come easy."

Keep an eye on how well the lines develop on both sides of the ball. And QB Brian Lewerke needs to take the next step for a position that has yet to replace Connor Cook.

?Sometimes you're measured a little bit by how you handle the problems not just in all the good times,? said Dantonio. ?We've had some good times and those are easy to stand up there and sing the fight song and put a hat on. Not as easy when you are going through these types of things, but at the end of the day that's why I was hired. I was hired to solve problems and that's what we're going to do.?