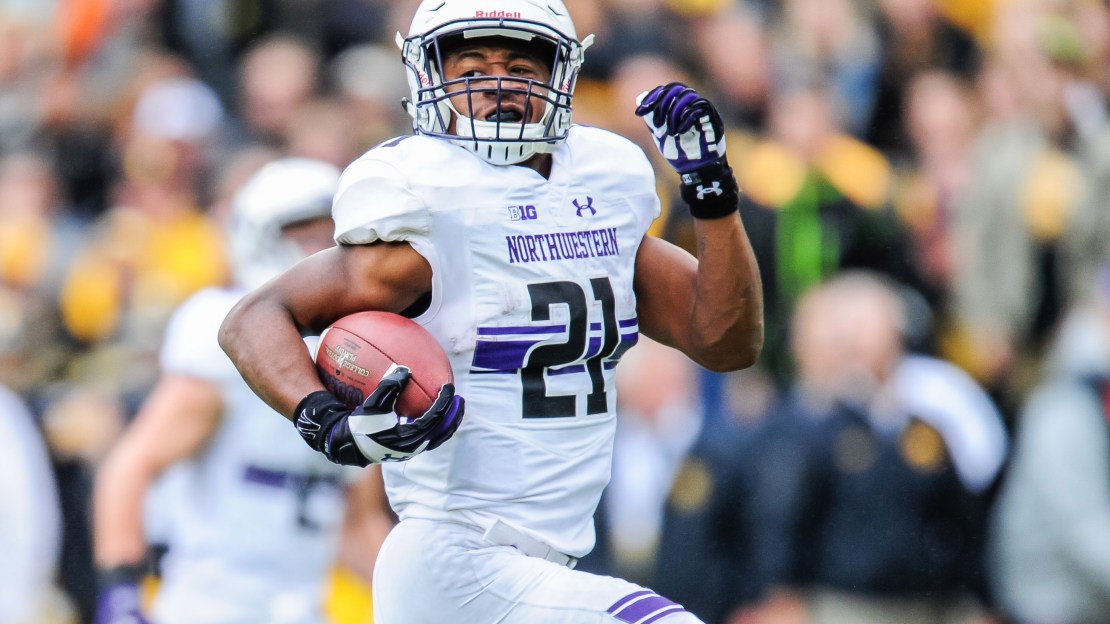 This could be the ?Year of the Running Back? in the Big Ten, with many big-time options doting rosters across the conference. And no back is better than Penn State?s Saquon Barkley, who is the league?s top Heisman contender and could be primed for a 2,000-yard season.

How many Big Ten backs will rush for over 1,000 yards this season? Here is my prediction, listed in order of 2016 rushing yards.

Justin Jackson, Northwestern. He is poised to leave Evanston as the school?s all-time leading rusher, as Jackson finished the 2016 season ranked second in program history with 4,129 career rushing yards. He led the Big Ten with a career-high 1,524 rushing yards in 2016 (117.2 ypg), becoming the first player in Northwestern history to rush for 1,000-plus yards in three seasons. The senior should eclipse the 1,500-yard barrier again working in an offense that has four starting linemen back and a passing threat in QB Clayton Thorson.

Saquon Barkley, Penn State. The junior is on path to join an illustrious fraternity of all-time great Nittany Lion backs that includes the likes of Franco Harris, Blair Thomas, D.J. Dozier, Curtis Enis, Ki-Jana Carter and Larry Johnson, among others. In fact, Barkley may be the top back in the nation and could rush for over 2,000 yards in 2017 after totaling 1,496 last season-the most ever by a PSU sophomore. Barkley will work behind a line that has four starters and finally appears to be a strength. And dynamic QB Trace McSorley will keep defenses from focusing on Barkley.

Rodney Smith, Minnesota. He ran for 1,158 yards last season sharing time with Shannon Brooks, who ran for 650 yards. The return of four starting linemen will help the junior, but the passing game needs more oomph as a new quarterback is broken in.

Mike Weber, Ohio State. He was a dynamo in 2016, when he ran for 1,096 yards en route to earning Big Ten Freshman of the Year honors. Weber became just the third Ohio State freshman to rush for over 1,000 yards in a season, joining Robert Smith (1,126 yards in 1990) and Maurice Clarett (1,237 yards in 2002). Pretty good company. Weber will run behind a line that has four starters back. And new coordinator Kevin Wilson produced a lot of prolific back while head coach at Indiana. If defenses focus on muting QB J.T. Barrett, Weber could have a monster season.

Akrum Wadley, Iowa. The explosive Wadley ran for 1,081 yards last season. And that was with LeShun Daniels, who ran for 1,058 yards in 2016, in the backfield with him. Daniels is gone; Wadley is the man. The senior is one of the most explosive backs in the league, averaging 6.4 yards per tote last year with three TD runs over 50 yards. That was the best per-carry average ever for an Iowa 1,000-yard rusher. Even more good news for Wadley: All five starting linemen are back.

Ty Johnson, Maryland. He was a sensation last year as a sophomore, running for 1,004 yards and averaging an eye-popping 9.1 yards per carry. And the Terrapin line is only getting better. But a big key to another 1,000-yard season for Johnson will be the development of a new signal-caller to keep defenses from ganging up on the run.

LJ Scott, Michigan State. He just missed the 1,000-yard mark in 2016, finishing with 994 yards in 2016. A big, physical back, Scott?s 1,693 career rushing yards are fifth most by a Spartan through their sophomore season. His effort could be muted in 2017 if the Michigan State passing game lacks teeth and the line play doesn?t continue.

Chris Evans, Michigan. These factoids should blow you away: Michigan has not had a 1,000-yard rusher since Denard Robinson in 2012 and has not had a running back eclipse the grand mark since Fitzgerald Toussaint in 2011. Evans could be primed to end that dubious drought. As a freshman, Evans was No. 2 on the team in rushing in 2016 with 614 yards. But he will work behind a line that has something to prove with three starters gone.

Bradrick Shaw, Wisconsin. The Badgers churn out 1,000-yard rushers like Detroit churns out cars. Corey Clement had 1,375 last year, but he?s gone. Shaw looks like the heir after he ran for 5.2 yards per tote in limited duty last season. (Keep an eye on Pitt transfer Chris James, too.) Shaw will be escorted by a vintage line that has four starters back. And a passing game led by QB Alex Hornibrook should create room for Shaw.

Mikale Wilbon, Nebraska. The junior could be the heir to Terrell Newby in what may be a committee approach. Keep an eye on speedy sophomore Tre Bryant, who could emerge as the guy. The Husker offense will have a West Coast look with Tanner Lee under center. To make the attack go, the ground game must be established. Mike Riley is committed to the run for an offense with three starting linemen back. But it?s a line with something to prove.

Camion Patrick, Indiana. The Hoosiers have had one of the most underrated rushing attacks in recent years, with backs like Jordan Howard, Tevin Coleman and Devine Redding churning out 1,000-yards seasons. The next in line could be Patrick, whom former coach Kevin Wilson often touted as the best player on the team. Injuries and academics have limited the former JC transfer in two seasons. If the senior can keep it together, Patrick could post a big season. But he will work behind a line with three new starters. If Patrick can?t carry the load in 2017, Mike Majette could be a 1,000-yard guy.