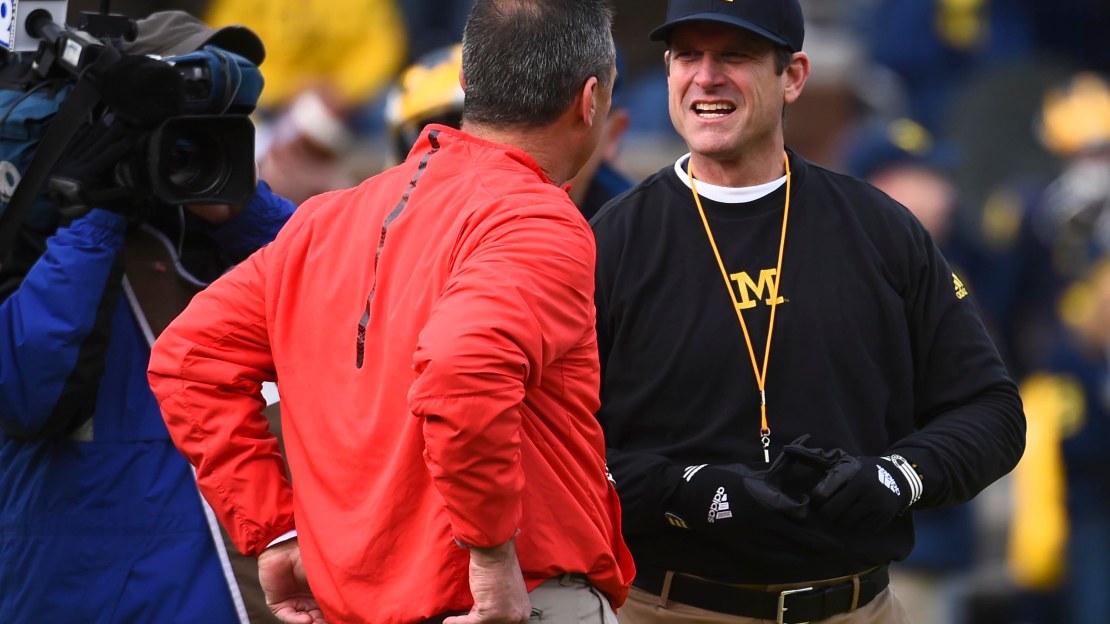 Here is my ranking of the Big Ten East schedules, with the toughest at the top.

1. Ohio State
Non-con: Army, Oklahoma; UNLV
Big Ten, home: Illinois, Maryland, Michigan State, Penn State
Big Ten, road: Indiana, Iowa, Michigan, Nebraska, Rutgers
Skinny: No Big Ten team has a more daunting non-conference game than this visit from mighty Oklahoma, which the Buckeyes toppled last year in Norman. And trips to Iowa City, Ann Arbor and Lincoln will be taxing for a program looking to win the division for the first time since 2014. On top of all that, defending champ Penn State treks to the Horseshoe. The Nittany Lions were the only school to dump Ohio State in the regular season last year. Will this be the ?Big Ten Game of the Year??

2. Michigan
Non-con: Air Force, Cincinnati, Florida (in Arlington, Texas)
Big Ten, home: Michigan State, Minnesota, Ohio State, Rutgers
Big Ten, road: Indiana, Maryland, Penn State, Purdue, Wisconsin
Skinny: No league school has a more daunting non-conference schedule. There is no ?layup.? The trip to Jerry?s World to play the Gators will be a good test for a revised Michigan roster. The season-ender vs. Ohio State always is a doozy; and visits to State College and Madison will tell us all we need to know about Jim Harbaugh?s third Wolverine squad. Can Michigan win the Big Ten for the first time since 2004?

3. Maryland
Non-con: Central Florida, at Texas, Towson State
Big Ten, home: Indiana, Michigan, Northwestern, Penn State
Big Ten, road: Michigan State, Minnesota, Ohio State, Rutgers (at Yankee Stadium), Wisconsin
Skinny: The Terps are still a work-in-progress under DJ Durkin and may be pressed to scratch out six wins with this schedule. Maryland is going to Austin, Texas? That makes the Terps one of just two Big Ten East teams with a non-con road game. Maryland could go 1-3 at home vs. league foes. All three cross-division games are vs. bowl teams, including a trip to Madison. A game vs. FCS Towson State offers some relief; the Terps and Rutgers are the lone East schools to play a FCS foe.

4. Penn State
Non-con: Akron, Georgia State, Pitt
Big Ten, home: Indiana, Michigan, Nebraska, Rutgers
Big Ten, road: Iowa, Maryland, Michigan State, Northwestern, Ohio State
Skinny: The cross-division games are rugged, with the Huskers coming to Beaver Stadium and PSU travelling to Iowa City and Evanston. Penn State will be looking to avenge a lopsided defeat at Michigan in 2016. Throw in a trip to Columbus, and you can see why some feel the Nittany Lions may be hard-pressed to repeat as league champs.

5. Rutgers
Non-con: Eastern Michigan, Morgan State, Washington
Big Ten, home: Maryland (Yankee Stadium); Michigan State, Ohio State, Purdue
Big Ten, road: Illinois, Indiana, Michigan, Nebraska, Penn State
Skinny: The opener vs. Washington may be too much for the Scarlet Knights to handle; it was last season in Seattle. But if you look closely, it?s not crazy to pick out six winnable games on this schedule. Really. A favorable slate of cross-division games helps Rutgers? cause. And RU joins Maryland as the only East schools to play a FCS squad.

6. Michigan State
Non-con: Bowling Green, Notre Dame, Western Michigan
Big Ten, home: Indiana, Iowa, Maryland, Penn State
Big Ten, road: Michigan, Minnesota, Northwestern, Ohio State, Rutgers
Skinny: The visit from Notre Dame will tell us a lot. Like the Spartans, the Irish are looking to rebound from a bummer season. Trips to Ann Arbor and Columbus may be downers. But all three cross-division games are winnable. In fact, the Spartans may be set up to return to the postseason after last year?s 3-9 debacle.

7. Indiana
Non-con: Florida International; Georgia Southern; at Virginia
Big Ten, home: Michigan, Ohio State, Rutgers, Wisconsin
Big Ten, road: Illinois, Maryland, Michigan State, Penn State, Purdue
Skinny: The Hoosiers could go 5-1 at home, which would go a long way toward punching their postseason ticket for a third year in a row. The last time Indiana went to three bowls in a row? It was 1986-88. But to go bowling again, IU will need to excel on the road since the home slate is stacked with foes like the Buckeyes, Wolverines and Badgers. Oh, my! Indiana joins Maryland as the only East schools to play a non-con road game.