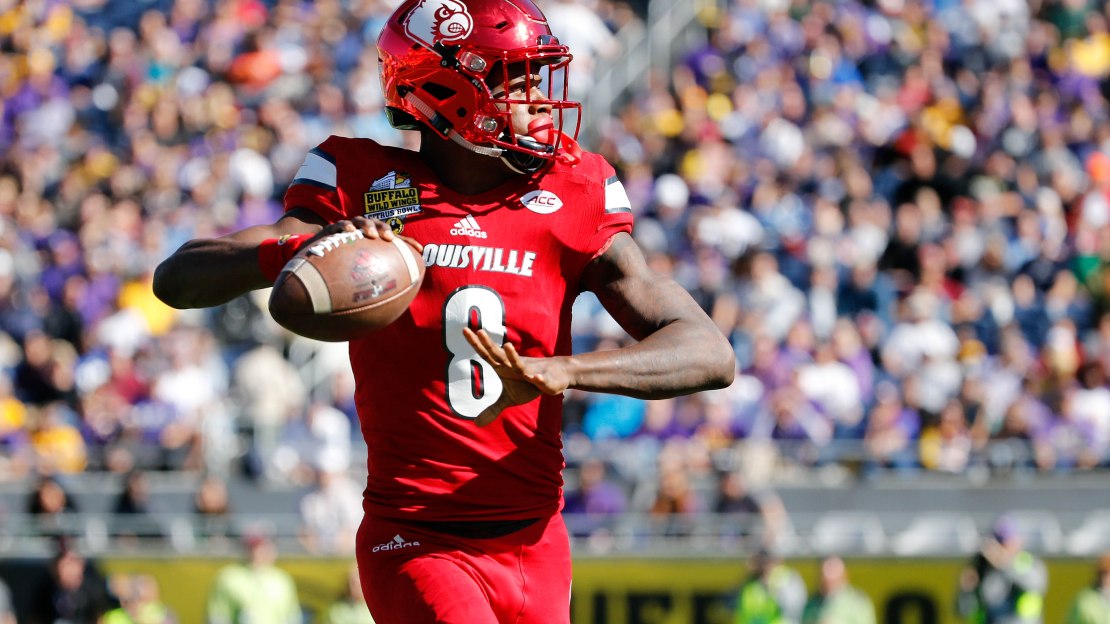 Any team with a good quarterback is dangerous. And the Big Ten will see several good signal-callers this fall during non-conference action.

Here are the Top 15 quarterbacks that Big Ten teams will face in 2017.

1. Lamar Jackson, Louisville vs. Purdue, Sept. 2 (Indianapolis). New Boilermaker coach Jeff Brohm opens his career vs. alma mater in Lucas Oil Stadium. And when he looks across the field, he will see defending Heisman winner Jackson, one of the most deadly dual-threats in the nation. In 2016, he became the first player in FBS history with 3,300 passing yards and 1,500 rushing yards in a season. The 6-3 junior became only the sixth player in FBS history to rush and pass for 20 touchdowns in the same season with 30 TD tosses and 21 rushing scores, and Jackson set the ACC record for rushing yards by a quarterback (1,571). He threw for 3,543.

2. Baker Mayfield, Oklahoma at Ohio State, Sept. 9. The 6-1, 218-pound senior finished third in Heisman Trophy voting last season. He?s the only player in OU history to register at least 5,000 passing yards (7,665) and at least 500 rushing yards (582) in a career. Baker began his career at Texas Tech but has accounted for 89 touchdowns as a Sooner, the most by a player in the first 26 games of an OU career. Mayfield will test a retooled Buckeye secondary.

3. Jake Browning, Washington at Rutgers, Sept. 1. The 6-2, 206-pound junior was the 2016 Pac-12 Offensive Player of the Year. Browning finished sixth in the Heisman Trophy voting, the second-highest ever by a UW player. He ended the season with a school-record 43 touchdown passes, tying the Pac-12 record. And Browning was second in the NCAA in TD passes and finished seventh in pass efficiency. Rutgers figures to have a strong secondary. But can it handle Browning?

4. Josh Allen, Wyoming at Iowa, Sept. 2. Allen burst on the scene in 2016. His play attracted attention from NFL scouts, some of who thought he might enter the NFL Draft early this year. The 6-5, 222-pound junior should be one of the top returning QBs in the nation in 2017 and a likely first-round selection. In 2016, Allen threw for 3,203 yards and also added 523 rushing yards for 3,726 total yards, which was second in the conference. He threw 28 touchdowns with 15 interceptions.

5. Quinton Flowers, USF vs. Illinois, Sept. 15. The 6-0, 210-pound senior was the AAC Offensive Player of the Year last season. Flowers was the first 2,000-yard passer and 1,000-yard rusher in South Florida and state of Florida collegiate history. He broke the USF season rushing record with 1,530 yards and rushing touchdown record with 18 TD. And he set the USF season record for total offense with 4,337 yards (2,807 passing yards). Flowers will stress an Illinois defense with questions.

7. Mike White, WKU at Illinois, Sept. 9. A transfer from South Florida, White had the unenviable task of following all-everything Hilltopper quarterback Brandon Doughty. White responded in dynamic fashion, leading an offensive attack that led the FBS in points per game (45.5) and was No. 3 in passing efficiency (174.87), No. 5 in total offense (523.1) and No. 5 in passing offense (336.8). White finished his first campaign on The Hill No. 3 nationally in passing efficiency (181.4) and passing yards per completion (15.58)–both the top marks in Conference USA. White completed 280 of 416 passes for 4,363 yards with 37 touchdowns to just seven interceptions.

8. Drew Lock, Missouri vs. Purdue, Sept. 16. The 6-4, 205-pound junior finished 2016 ranked first in the SEC in passing yards (3,399) and second in passing yards per game (283.3) and yards per completion (14.34). Lock posted top-20 marks nationally in all three categories as well, peaking at 10th nationally with his 3,399 passing yards. He also ranked second in the SEC in completions per game (19.75) and third in total offense (293.5), while his 3,399 passing yards are the fifth-most in program history in a single season and the most ever in a 12-game season at Mizzou. Purdue?s secondary is a major worry, and it could get shredded on this day in Faurot Field.

9. Shane Buechele, Texas vs. Maryland, Sept. 2. The 6-1, 191-pound Buechele was a revelation as a true freshman last season and will put pressure on a Maryland defense that is still developing. The son of former big-leaguer Steve, Shane became the first true freshman quarterback in school history to start the first two games of his career. And he was just the second true freshman QB, joining Bobby Layne (1944) as a season-opening starter. Buechele completed 236-of-391 (60.4 percent) passes through the first 12 games of his career for a Texas freshmen-record 2,958 passing yards and 21 passing touchdowns.

10. Tanner Mangum, BYU vs. Wisconsin, Sept. 16. The 6-3, 223-pound junior is primed for big things who will play vs. a rebuilt Badger secondary. Last season, he played in five games, starting against Wyoming in the Poinsettia Bowl. Mangum completed 22-of-33 passes for 241 yards and three touchdowns on the season.

11. Justin Herbert, Oregon at Nebraska, Sept. 9. The 6-6, 225-pound sophomore was the first true freshman to start a game as quarterback for Oregon since 1983. Herbert made his collegiate debut in the season opener vs. UC Davis, taking the final snap from center in a 53-28 win. He didn?t return again until four games later, culminating a two-minute, 85-yard drive late in the fourth quarter with a 4-yard scoring run. Herbert will face what figures to be a strong Husker secondary.

12. Brandon Wimbush, Notre Dame at Michigan State, Sept. 23. The 6-1, 226-pound sophomore redshirted last season and is ready to emerge with DeShone Kizer (declared for draft) and Malik Zaire gone (transfer Florida). Wimbush is more potential than production, having thrown just five passes in his career. Still, some draw comparisons to-ahem-Tony Rice of the 1988 national championship Irish. But unlike Rice, Wimbush has a strong, accurate arm.

13. Daniel Jones, Duke vs. Northwestern, Sept. 9. The 6-5, 210-pound sophomore started 12 games for the Blue Devils last year. Jones had a solid first season as Duke's starter, throwing for 2,836 yards and 16 touchdowns as a redshirt freshman. He also was the team's second-leading rusher with 486 yards and four more scores for an injury-ravaged team that finished 4-8 and missed the postseason for the first time since 2011.

15. Brogan Roback, Eastern Michigan at Rutgers, Sept. 9. The 6-3, 206-pound senior is an under-the-radar talent. A four-star recruit, Roback threw for 2,694 yards with 18 touchdowns last season. He has made 23 career starts with 5,763 yards passing with 38 TDs. Roback will face a strong Scarlet Knights secondary.