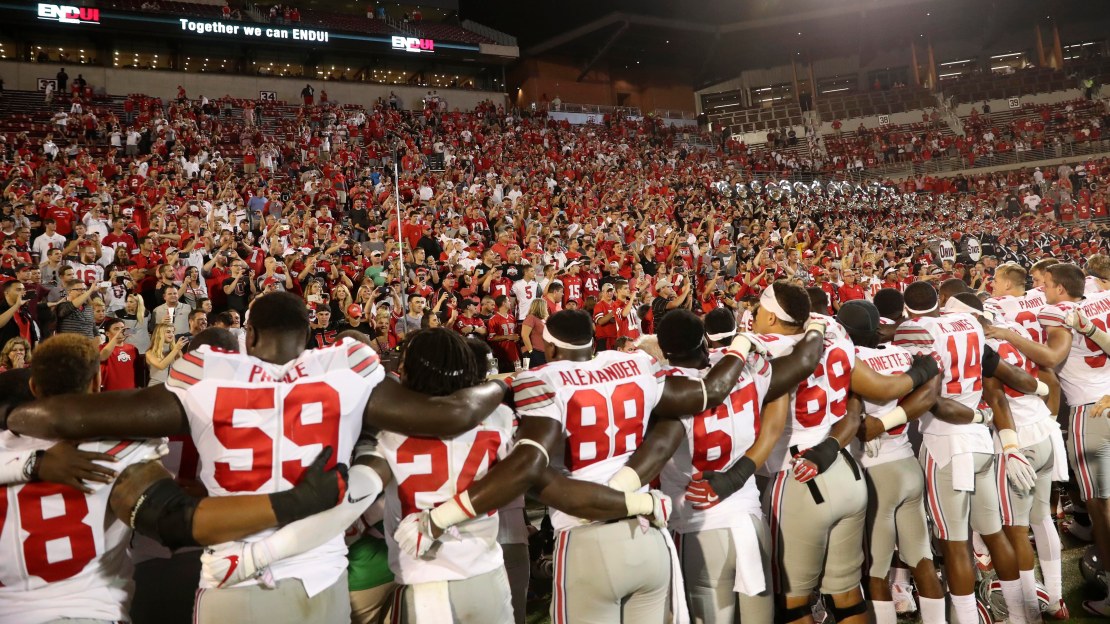 There is nothing like a good non-conference game to test a program before the rigors on league play kick in. And each Big Ten school has at least one stern test looming this fall.

Here is the top non-conference game for each Big Ten squad, ranked 1-14.

1. Oklahoma at Ohio State, Sept. 9. The visit from Oklahoma to the iconic Horseshoe for the second game of the season should be a doozy. The Buckeyes won last season in Norman, 45-24, so you know OU will be stoked for payback. Adding intrigue is the fact former Sooner offensive coordinator and Indiana coach Kevin Wilson is in his first season as Ohio State?s OC. So, a week after he faces the Hoosiers (on a Thursday) in the season opener, he takes on Oklahoma. Another storyline is the fact the Sooners will face the Buckeyes without Wilson?s former boss, Bob Stoops, who shockingly retired last week. Lincoln Riley is now running the show.

2. Michigan vs. Florida at Arlington, Texas, Sept. 2. A season-opener vs. Florida in Jerry?s World will be a great litmus test for a Michigan team that is in transition after having a national-high 11 NFL draft picks. Making this game more dangerous is the fact the Gators are getting better under Jim McElwain coming off back-to-back SEC East titles. These storied programs have met three times, all in bowl games. And the Wolverines have won all three, including a 41-7 victory in the last encounter in the Buffalo Wild Wings Bowl after the 2015 season-Harbaugh?s first at Michigan.

3. Pitt at Penn State, Sept. 9. These foes renewed their rivalry last year after it was dormant since 2000. Thank goodness. College football is better when these schools clash. The Panthers toppled the Nittany Lions in 2016, 42-39, one of just two losses for PSU on its way to the Rose Bowl Game. You know Panthers coach Pat Narduzzi will have his team ready to invade Beaver Stadium. Pitt has not been to State College since 1999, the last time Penn State beat the Panthers. And Pitt hasn?t won there since 1988, losing the last four visits.

4. Nebraska at Oregon, Sept. 9. The Huskers beat the Ducks last year in Lincoln, 35-32, but that was an Oregon squad that went on to finish 4-8 and missed a bowl for the first time since 2004. UO coach Mark Helfrich was fired and the school tabbed Willie Taggart from South Florida to assume command. NU coach Mike Riley knows Oregon well from his days as head coach at Oregon State. He is 6-11 all-time vs. the Ducks.

5. Wisconsin at BYU, Sept. 16. The Badgers should be tuned up by the time they roll into bucolic Provo. Still, the Cougars will be a difficult out, especially at home. BYU is coming off a 9-4 season and has a good QB in Tanner Mangum. UW probably wants to avoid getting into a shootout with BYU, as this Cougar offense will be a challenge for what looks like a stout Badger defense. The all-time series is 1-1, with both games taking place in Madison. Wisconsin won in 2013, while BYU prevailed in 1980.

6. Notre Dame at Michigan State, Sept. 23. The battle for the Megaphone Trophy will be a good test for MSU after opening at home vs. MAC foes Bowling Green and Western Michigan. Last year, the Spartans toppled the Fighting Irish, who endured a disappointing 4-8 campaign. That was Notre Dame?s worst record since going 3-9 in 2007 under Charlie Weis. Last year was the first losing season in Brian Kelly?s seven years in South Bend. ND had won three in a row vs. MSU before falling 36-28 in 2016. The schools won't meet again until 2026 and 2027 after having played 78 times since 1897. Notre Dame leads the all-time series, 48-29-1.

7. Northwestern at Duke, Sept. 9. This is a dangerous junket for a Wildcat squad with Big Ten West title hopes. (Insert your cute academic reference here, something about calculators, mortar boards or ivory towers.) David Cutcliffe is entering his 10th season in Durham and has built a fine program, going to four bowls in a row before a 4-8 mark in 2016. This is the third meeting in a row between these two prestigious institutions, as NU has won both in 2015 and 2016. In fact, the Wildcats have won three in a row vs. the Blue Devils.

8. Minnesota at Oregon State, Sept. 9. The Gophers beat the Beavers last year. But expect Oregon State to be improved under Gary Andersen, the former Wisconsin coach who won two games his first year in Corvallis and four last season. No doubt, OSU is a program on the rise as it faces P.J. Fleck?s first edition of the Golden Gophers. This will be Minnesota?s first trip to Oregon State, as the four previous meetings all were in Minneapolis. The Gophers are 3-1 vs. the Beavs.

9. Maryland at Texas, Sept. 2. Oh, boy. Yes, the Longhorns have struggled in recent years, going 16-21 the last three seasons and missing the postseason each of the last two years. But the Longhorns have a new coach in Tom Herman, who went 22-4 the last two years at Houston. And UT always has talent ? lots of talent. The Terps are 0-3 all-time vs. Texas, last playing in 1978 in the Sun Bowl. Maryland last was in Austin in 1959. Interesting fact: The Terrapins have been shut out in each of their three meetings vs. UT, losing by a combined score of 102-0.

10. Iowa at Iowa State, Sept. 9. Per usual, there isn?t much heavy-lifting in the non-conference for the Hawkeyes. But the trip to Iowa State is always emotion-charged ? and dangerous. It?s an in-state rival ? throw out the records ? blah, blah, blah. The battle for Cy-Hawk is a blast, as fans from Council Bluffs to Keokuk get jacked up. Iowa has won the last two meetings and three of the last four in Ames. But know this: Kirk Ferentz is just 9-9 vs. Iowa State.

11. Purdue vs. Louisville, in Indianapolis, Sept. 2. This is a heck of a way for new coach Jeff Brohm to kick off his tenure in West Lafayette. The Boilermakers aren?t ready for a program like Louisville, which welcomes back Heisman winner Lamar Jackson from a 9-4 team. The storylines in this game are endless. Brohm is a former Cardinal and Louisville native. And U of L coach Bobby Petrino is a mentor of Brohm?s. These teams met once before, playing to a 22-22 tie in 1987 in game that featured Fred Akers vs. Howard Schnellenberger in Ross-Ade Stadium.

12. Indiana at Virginia, Sept. 9. Yes, the Cavaliers have been to just one bowl (2011) since 2007 and are coming off a 2-10 season. Still, this is an ACC program. So, there is talent. And Bronco Mendenhall is a good coach beginning his second season with UVa. He built a strong program at BYU before coming to Virginia. Complicating matters for Indiana is the fact the trip to Charlottesville comes on the heels of a season-opening visit from Ohio State. Indiana and Virginia have played just two times. The Cavaliers won both encounters, 47-7 in Charlottesville in 2009 and 34-31 in Bloomington in 2011.

13. Illinois at South Florida, Sept. 15. This Friday night affair will be a tall task for Illinois vs. a likely Top 25 squad from the American Athletic Conference. The Bulls are coming off an 11-2 season but have a new coach in ex-Texas leader Charlie Strong after Willie Taggart took the Oregon job. And USF has a top signal-caller in Quinton Flowers, a monster dual-threat who will pose a big challenge for the Fighting Illini.

14. Washington at Rutgers, Sept. 1. The season-opening visit from U-Dub on a Friday night will be daunting for Chris Ash and Rutgers. The Scarlet Knights got an up-close look at the Huskies last year, losing 48-13 in Seattle as U-Dub went on to earn a playoff bid. Chris Petersen will have another good team in 2017.