Jordan Hulls Q&A: 'I am excited to see what he has in store for our program' 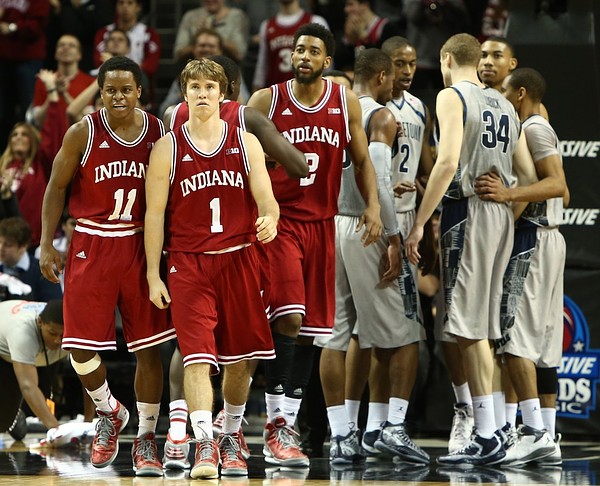 Jordan Hulls was part of the wave of talent that helped put Indiana basketball back on the proverbial map, and the Hoosier faithful loves him for it.

They also love him because the former Bloomington South standout was the 25th Indiana Mr. Basketball to don the candy stripes. The fact he is one of the best shooters in program history doesn't hurt, either.

Hulls drained 254 3-pointers, good enough for second in program history at the time, and shot 44 percent from distance during his four successful seasons in Bloomington.

These days, the sharpshooter is playing overseas, having just finished his fourth season and first with Eisbären Bremerhaven in Germany.

BTN.com recently caught up with Hulls for an email Q&A.

BTN.com: You had a 3.94 GPA at Bloomington South High School. What got in the way of the 4.0?
JH: I?m not even 100% sure what made me fall below my senior year? was probably a ceramics class or something, I wasn?t happy about it.

BTN.com: Whose idea was it for the candy stripe pants at your wedding reception?
JH: That idea was both me and my wife's. We both went to IU and grew up Indiana fans, and with our unique situation with so many IU players in the wedding, we thought that it would make for a really cool picture and memory. We didn?t know that it would be that big of a hit all over the news and stuff but then again, it is Indiana and Hoosier Nation was all over it!

Once a Hoosier, always a Hoosier! Congrats to former player, Jordan Hulls, on his wedding this past Saturday! ?????? pic.twitter.com/K0yTouP0nC

BTN.com: You ever wear those in Germany, and if so, what kind of looks do you get?
JH: I do not take a pair of them to Europe, haha. However, I do rep IU gear and pass it out in every country I play in to just try and get people to wear the right stuff. Everyone at one point does ask me about them, though, after they see pictures, and I can?t really explain it to them – just an Indiana thing!

BTN.com: Speaking of Germany, what?s your favorite food over there?
JH: The bratwurst is crazy good. They have all different types of cuisines, but speaking strictly German food, I?m going with the bratwurst.

BTN.com: If you *had* to be friends with one Boilermaker, who would it be?
JH: I actually had a great relationship with the coaching staff when I was being recruited out of high school and was AAU teammates with D.J. Byrd?But with that being said I?d say? easy choice, DJ.

BTN.com: Which Indiana moment or game, positive or negative, do you find yourself thinking about the most?
JH: The moment I think of most was winning the Big Ten outright on the road at Michigan and also the Temple game where I hurt my shoulder. Obviously, the positive moment with winning the title outright for first time in 20 years, I think it was the way that we were able to come back and win that game somehow was just awesome. The Temple game was positive from a team standpoint because we were able to hold on and grind out a win in NCAA?s after Victor (Oladipo) and Cwat (Christian Watford) made huge plays, but for me personally was bad moment because that?s the game where I got hurt. I had a AC joint separation and partial torn pec muscle after colliding with a Temple player. I got shots to try and numb it for the rest of that game and the Syracuse game, but I could barely lift my arm up so I hate thinking back to that moment because it made my last game and a half not too great to finish out my career.

BTN.com: What?s your best Tom Crean story?
JH: My best Coach Crean story?. that?s a good question. There are too many to pick from. But I will say a fun fact is that I have never seen Coach shoot a shot? He would always demonstrate a drill then throw the ball to no one and someone would eventually chase it down, haha. Just crazy that in my time there I never saw him shoot.

BTN.com: Any early thoughts on Archie Miller, and on what he brings as the face of the program, as a recruiter and as a coach?
JH: After meeting him and talking with other people, the vibe is very good about what he brings to the table. I am excited to see what he has in store for our program. His coaching resume speaks for itself, and now he?s at a big time school ready to prove himself, which I think is great to have that coming in and accepting the challenge. He?s got a great staff, and I?m pumped he got Coach (Ed) Schilling back to Indiana with his roots to the state for his expertise and for recruiting and also keeping Derek Elston. Looking forward to this year!

BTN.com: You played with a lot of talented guys at IU. Just for fun, create the perfect basketball player out of those guys.
JH: This is a tough question? lots of qualities I?d like from a variety of people. But here's what I?d take:

That would make for a pretty dominant presence I?d like to think.

BTN.com: Can you talk about your Never Lose Hoop Foundation, and why you started it?
JH: Never Lose Hoop Foundation started out as the ?Hulls Foundation? to help offset the costs of all of my dad?s treatments when he was fighting his own battle with cancer. After going through that experience with him in 2011, we as a family felt the emotional and physical effects of what cancer can do not only to the one fighting the disease but also the family/people involved in their life. We as a family wanted to help make a difference to those in similar situations, and that?s when ?Never Lose Hoop? – assisting kids affected by cancer was created. The goal of this fund is to help kids who are affected by cancer in several different ways: financially, educationally and emotionally. We as a foundation strive to be a positive source of Hoop (Hope) for each child. This is a fund of the Community Foundation of Bloomington & Monroe County, Inc.

One of our bigger sources for donations has come from our annual golf outing we hold in Bloomington.  We auction off cool items for the participants (a lot of IU memorabilia!) and take the money and put it in a fund that goes towards a family/kids in need.  For instance, last year we assisted our recipients with a trip to Niagara Falls. They chose their destination and got to do many other cool things with the money we were able to give them just so they could go out and have a fun time as a family and not worry about all the other obstacles they face on a daily basis.

This year our golf outing is July 20, and we are pumped to get our recipients and make a difference. People can register or donate online at jordanhulls1.com under the Never Lose Hoop tab.  It?s a very rewarding thing to be apart of, and it?s something we are very passionate about as a family!

RAPID FIRE
Favorite road Big Ten arena/atmosphere: Michigan State
Big Ten defender who gave you the most trouble: A specific defender doesn?t come to mind since lots of people switched up on me but as a team, Purdue and Ohio State were two of the better defensive teams, in my mind.
Favorite Indiana player growing up: My favorite Indiana player growing up was either AJ Guyton or Dane Fife.
Loudest you ever heard Assembly Hall: Definitely when we beat Kentucky. We had some really loud moments but that one takes the cake.
Most prized possession: My most prized possession not counting my newborn son would have to be my Big Ten Championship ring and my Mr. Basketball ring from high school.