Best of Week 11: Get ready for some big Big Ten West games 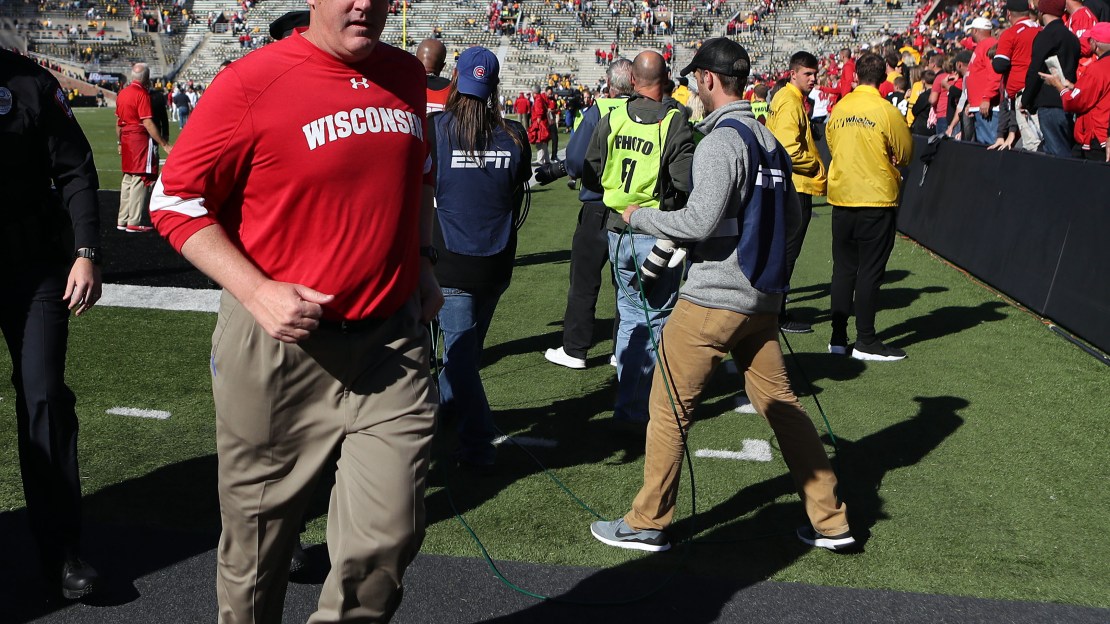 The season is hitting the home stretch, so a lot figures to be on the line. All 14 schools are in action with the Iowa at Wisconsin tilt at the top of the ?must watch? list.

The Badgers have won four of the last five vs. Iowa, but the Hawkeyes won their last visit to Camp Randall in 2015, taking a 10-6 decision.

Nebraska won the last meeting vs. Minnesota. Before that, the Gophers took two in a row from the Huskers. This appears to be a bubbling rivalry. You know new Minnesota coach P.J. Fleck wants to get off to a good start vs. Mike Riley and Co.

Michigan travels to Maryland, a foe it has beaten by a combined score of 87-3 the last two seasons. Will Jim Harbaugh have any mercy on his former defensive coordinator DJ Durkin? Nah.

Michigan State goes to Ohio State where it pulled off a stunning 17-14 upset the last time it visited in 2015. In fact, MSU has won its last two games in Columbus, taking a 10-7 decision in 2011. But the Buckeyes won last season in East Lansing and may be poised to win two in a row vs. the Spartans for the first time since winning seven in a row from 2000-08.

Maybe Purdue can find a way to shock Northwestern when it visits Evanston. NU has won three in a row in the series and has the makings of a good team in 2017. But maybe by this time of the season, Purdue will have found a groove. Maybe. The Boilermakers last beat NU in 2010, taking a 20-17 decision at Ryan Field.

Indiana has won two in a row vs. Illinois, but this will be the schools? first meeting since 2013. The last Fighting Illini coach to beat the Hoosiers? It was Ron Zook in 2011. Illinois is on its third coach since then.

Best game: If Wisconsin wants to repeat as Big Ten West champs, the Badgers probably will need to take down Iowa when it visits. Wisconsin is 6-3 in the last nine meetings vs. the Hawkeyes. This will be only the second meeting in Madison between these foes since 2009 in a series Wisconsin leads 45-43-2.

Best head coach matchup: Let?s go with Michigan State?s Mark Dantonio vs. Ohio State?s Urban Meyer. Dantonio has made the Spartans into one of the marquee programs in the nation during his 10-year stewardship, winning three Big Ten titles and earning a playoff berth in 2015. Meyer is one of the game?s elite, an all-time great who has three national titles on his resume.

Best coordinator clash: It doesn?t get much better than Iowa defensive coordinator Phil Parker vs. Wisconsin?s Paul Chryst, who calls him own plays. Parker, who served as defensive backs coach at the University of Iowa for 13 seasons, is in his sixth season as defensive coordinator. Chryst?s 21-6 (.778) overall record marks the best start by a Badgers coach through two seasons, and he is the first UW mentor to win consecutive bowl games to begin a tenure as head coach. He is 13-4 (.765) in Big Ten games, with only Ohio State (15-2) posting a better mark in league play over those two seasons.

Best QB battle: The clash between Purdue?s David Blough and Northwestern?s Clayton Thorson will be good. Blough paced the Big Ten in passing yards per game in 2016 (279.3 ypg). And his 25 TD passes were No. 2 in the league, as no other Big Ten signal-caller threw as many passes (517) or completed as many (295). Thorson set a new NU single-season record with 22 touchdown passes. His 3,182 passing yards are the most ever by a quarterback in their sophomore season and the fourth most in NU single-season history.

Best chance for an upset: The Golden Gophers may be able to take down visiting Nebraska. The Huskers will have a new quarterback and a new 3-4 defensive scheme. How will it all play out by November? A big issue for the Gophers is the fact this game falls between road trips to Michigan and to Northwestern. The Cornhuskers have won the last two games vs. Goldy, but Minnesota won the two before that.

Best matchup: How about Iowa?s offensive line vs. Wisconsin defensive line? This epitomizes Big Ten football. This will be a vintage Hawkeye front led by James Daniels and Sean Welsh. The Badgers welcome back veterans up front in Conor Sheehy, Olive Sagapolu, Alec James and Chikwe Obasih. And Isaiahh Loudermilk is an exciting youngster.

Player on the spot: Wins may be difficult to come by for Illinois in its second season under Lovie Smith. But this looks like a Saturday when victory could be had, as Indiana visits Champaign. But for the Fighting Illini to taste triumph, their quarterback will need to play well. Who will that be? And how will he be playing?