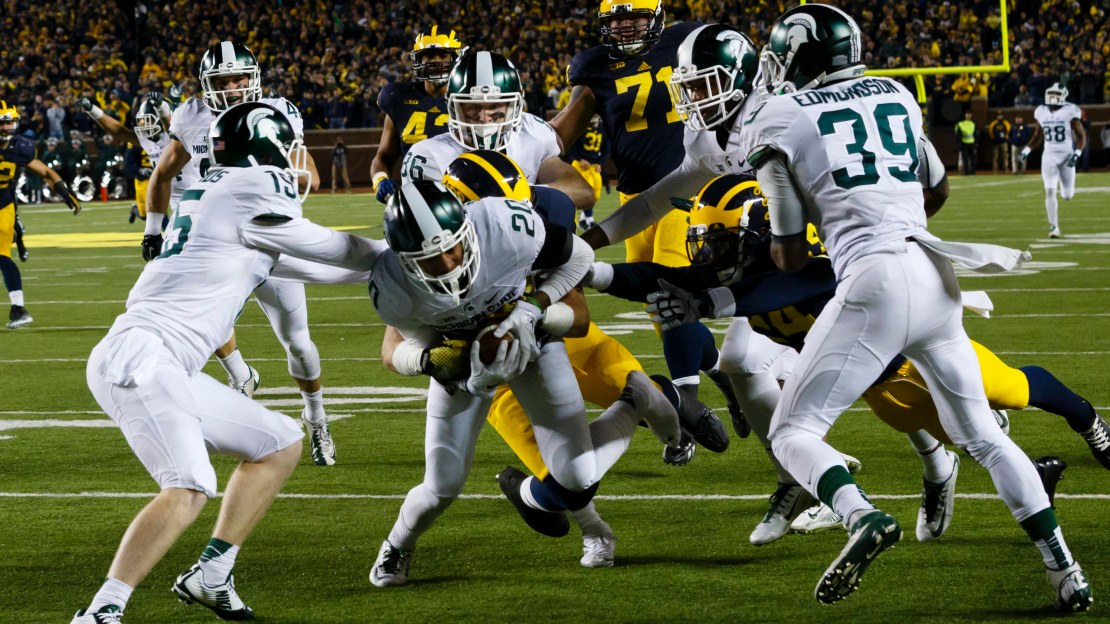 Week 6 offers up some interesting tilts, including a big rivalry game with Michigan State playing at Michigan. But there are two other very compelling games, headlined by Wisconsin playing at Nebraska. And keep an eye on the Penn State at Northwestern contest.

Michigan needs to take care of business at home if it wants a good shot to win the East Division. And that means dumping Michigan State. Few rivalries are as intense. The Wolverines ended the Spartans? three-game winning streak in the series last year with a 32-23 triumph in East Lansing. Now, Michigan will try to beat MSU in Ann Arbor for the first time since 2012 in a series that has seen Michigan State go 7-2 in the last nine meetings. You know Jim Harbaugh wants to flip this script.

Northwestern has won the last two vs. Penn State. Before that, PSU won six in a row vs. NU. This could be ? COULD BE ? a preview of the Big Ten title game. No doubt, both programs are among the hottest in the conference. And the running back battle between NU?s Justin Jackson and Penn State?s Saquon Barkley will be must-watch TV.

Maryland?s game at Ohio State will be daunting for the Terps. Maryland has been manhandled in each of its three meetings with the Buckeyes as a member of the Big Ten, going 0-3 and losing by an average score of 54-18 (being outscored 163-55). Last year, OSU won, 62-3. DJ Durkin is adding beaucoup talent in College Park, but his crew still may not be up to the challenge of winning in the vaunted Horseshoe.

Minnesota has taken four in a row vs. Purdue, which last beat the Golden Gophers in 2011. Interesting factoid: New Gopher coach P.J. Fleck lost at Ross-Ade in 2014 as coach of Western Michigan. It will be fun to watch Fleck battle Purdue boss Jeff Brohm, who each are in their first year on the job and will be measured vs. one another. Some speculate that the Boilers wanted to hire Fleck from Western Michigan but lost out on the phenom to Minnesota. Purdue needs to start beating the Gophers if it wants to move up the pecking order in the West.

If Iowa wants to make a run at the Big Ten West title, it needs to take care of business at home vs. Illinois. The Hawkeyes are 8-1 in their last nine vs. the Illini. Illinois last won in Iowa City in 1999 when Ron Turner was coach. Both teams need to develop their quarterbacks.

Rutgers and Indiana are off.

Here is the Best of Week 6.

Best game: Wisconsin has been a nemesis of sorts for Nebraska, the program the Huskers much catch if they want to rule the West and win a conference title for the first time since 1999. The Badgers may be favored when they come to Lincoln on this first Saturday in October. But UW could go down if its offense is too run-oriented. This game will feature two intriguing QBs in the Badgers? Alex Hornibrook and the Cornhuskers? Tanner Lee. Wisconsin has won four in a row vs. the Cornhuskers and five of six.

Best head coach matchup: It won?t get much better than Michigan State?s Mark Dantonio vs. Michigan?s Jim Harbaugh. This is an uber-intense rivalry. And these coaches are the face of it. So far, the two combatants are 1-1 vs. each other with each winning on the other?s home field. Who can forget the last time the Spartans visited Ann Arbor? Back in 2015, the Spartans? Jalen Watts-Jackson grabbed a flubbed punt and jetted 38 yards to paydirt for a touchdown on the final play of the game, giving Michigan State a shocking 27-23 win over Michigan.

Best coordinator clash: It will be fun to watch Wisconsin?s Paul Chryst call plays vs. new Nebraska defensive coordinator Bob Diaco. Chryst is one of the smartest coaches in the Big Ten, a true offensive savant who knows how to find mismatches and exploit them. The former UConn head coach and Notre Dame defensive coordinator, Diaco has installed a 3-4 scheme to dovetail with the personnel on hand, which includes myriad talented linebackers. The scheme offers flexibility. But can it slow down Wisconsin?s vaunted run game?

Best QB matchup: The meeting of Penn State?s Trace McSorley vs. Northwestern?s Clayton Thorson should be excellent. McSorley was a revelation last season in his first year as a starter, the ultimate dual-threat who drips with the intangibles that coaches love in their signal-callers. Thorson was an honorable mention All-Big Ten selection by the conference?s coaches and media in 2016 in his second season as the Wildcats? starting signal-caller. He set a new NU single-season record with 22 touchdown passes. And his 3,182 passing yards were the most ever by a quarterback in their sophomore season and the fourth most in NU single-season history.

Best chance for an upset: It wouldn?t be a shock to see Purdue knock off visiting Minnesota. Jeff Brohm?s hire has gotten lost amid the bluster and hype of P.J. Fleck?s arrival in the Twin Cities. But don?t underestimate the workmanlike Brohm, an offensive mastermind whose resume glistens every bit as much as Fleck?s. Plus, on this day, the Boilermakers figure to have a decided edge at quarterback with David Blough, while Minnesota?s situation under center is a bit murky.

Best matchup: Penn State?s trip to Evanston will feature a meeting of the Big Ten?s best running backs in the Nittany Lions? Saquon Barkley and the Wildcats? Justin Jackson. Each has Heisman dreams. Jackson led the Big Ten with 1,524 yards rushing last year, while Barkley notched 1,496. Whichever back has the better day figures to lead his squad to victory.

Player on the spot: New Nebraska QB Tanner Lee needs to excel if he wants to lead the Cornhuskers past visiting Wisconsin. The Cornhuskers need to start showing that they are the top program in the Big Ten West and the team to beat in the division. And that starts with toppling Wisconsin, the division?s lynchpin. Lee drips with potential, as the Tulane transfer will help Mike Riley finally transform the Husker offense into West Coast style he desires. Lee will face a good UW defense. How will he perform?