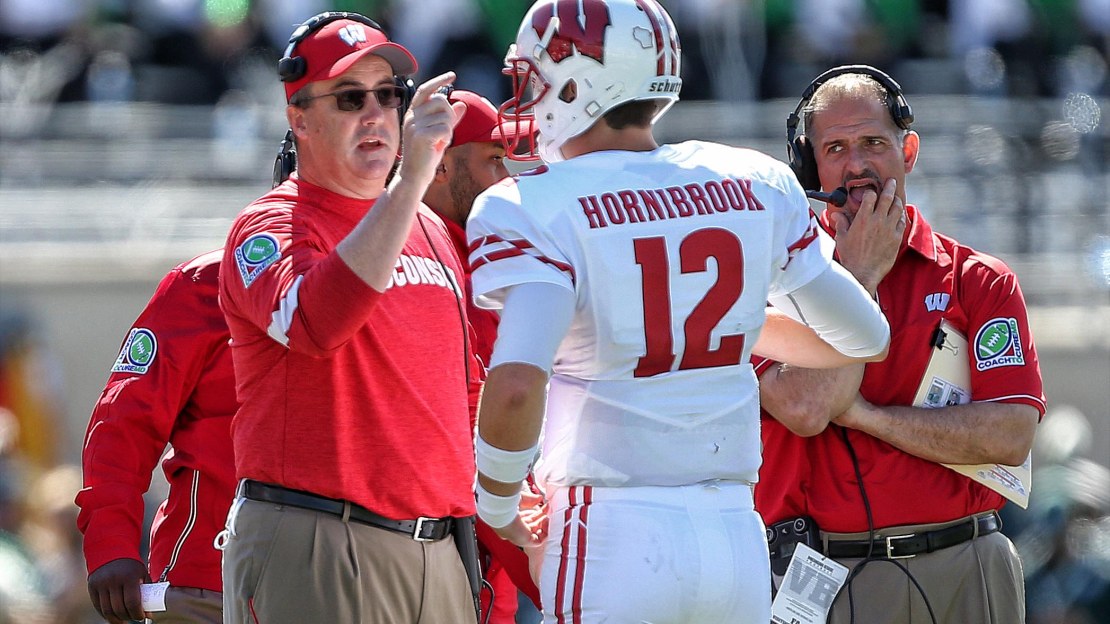 This is final weekend of full-scale non-conference action. And there are some enticing tilts.

Wisconsin?s game at BYU will be interesting. And Purdue plays at Missouri two weeks after opening vs. Louisville. Tough opening schedule for Jeff Brohm and Co. There also are two tilts vs. military academy schools, as Michigan welcomes Air Force and Army goes to Ohio State. Michigan is 2-0 all-time vs. Air Force, winning in 1964 and 2012. OSU and Army never have met. The Black Knights have some mojo under Jeff Monken, coming off an 8-5 season, a bowl win and their first victory vs. Navy since 2001.

Side note: Find all of my weel-by-week schedule analysis right over here.

Iowa welcomes North Texas, where Hayden Fry coached before getting the Iowa job. The Mean Green went 5-8 last season and has been to just two bowls since 2004.

Illinois plays at South Florida on a Friday night. This will be a tall task vs. a likely Top 25 squad from the American Athletic Conference. The Bulls are coming off an 11-2 season but have a new coach in ex-Texas leader Charlie Strong after Willie Taggart took the Oregon job. And USF has a top signal-caller in Quinton Flowers, a monster dual-threat who will pose a big challenge for the Fighting Illini.

Purdue plays at Missouri, a program it last faced in the 1980 Liberty Bowl. The Boilers won that game in a QB battle that pitted Mark Herrmann vs. Phil Bradley. Purdue leads the all-time series, 6-2. The Boilers last visited Columbia, Mo., in 1956, winning 16-7.

The Big Ten doesn?t want its schools playing FCS foes. But the Scarlet Knights will play Morgan State. A building Rutgers program needs all the victories and confidence it can get. And with wins likely difficult to come by in 2017, this will be a good chance for Rutgers to notch a victory while having a good time doing it.

Penn State welcomes Georgia State of the Sun Belt, and the game should be a breeze. The Panthers just started playing football in 2010 and are in just their sixth season as a FBS program with one bowl appearance. Georgia State went 3-9 last year and hasn?t posted a winning mark since a 6-5 debut in 2010. Penn State should be able to empty the bench and name the score.

Maryland and Michigan State are off, the first bye weeks of the season.

Here is a look at the Best of Week 3.

Best game: The Badgers trip to BYU will be interesting. Wisconsin should be tuned up by the time it rolls into bucolic Provo. Still, the Cougars will be a difficult out, especially at home. BYU is coming off a 9-4 season and has a good QB in Tanner Mangum. UW probably wants to avoid getting into a shootout with BYU, as this Cougar offense will be a challenge for a Badger defense with a retooled secondary. The all-time series is 1-1, with both games taking place in Madison. Wisconsin won in 2013, while BYU prevailed in 1980.

Best coaching matchup: It will be fun to watch Air Force?s Troy Calhoun face off with Michigan?s Jim Harbaugh. Calhoun is in his 11th season at Air Force, owning a 77-53 mark with nine bowl trips. The guy is good and has been wooed for many schools but opts to remain in Colorado Springs. Harbaugh is Harbaugh, one of the most high-profile and successful coaches in the nation. That guy wins wherever he goes, from the University of San Diego, to Stanford, to the 49ers to Michigan.

Best coordinator clash: Old vs. new. BYU offensive coordinator Robert Anae vs. Wisconsin defensive coordinator Jim Leonhard. Anae is a sage coach who has been OC for years at his alma mater. Leonhard is the third DC in three years for Wisconsin. But he never has been a coordinator and is in just his second year as a coach. Leonhard impressed as the secondary coach in 2016 and has a bright future. And he will have plenty of talent to work with, especially along the front seven.

Best QB battle: How about Purdue?s David Blough vs. Missouri?s Drew Lock? Pretty good. Last season, Blough paced the Big Ten with 517 pass attempts and passing yards per game (279.3) while tossing 25 touchdowns. However, the senior also threw 21 interceptions. It will be interesting to see how new Purdue coach Jeff Brohm can enhance the skills of Blough. Lock will be one of the top quarterbacks in the SEC. Last year, the junior finished the regular season ranked first in the SEC in passing yards (3,399) and second in passing yards per game (283.3) and yards per completion (14.34).

Best chance for an upset: The Gophers need to be careful when Middle Tennessee State comes to town. The Blue Raiders have gone to bowls in three of the last four seasons and have a talented QB in Brent Stockstill, the son of MTSU coach Rick who led his team to a win at Missouri last year.

Player on the spot: The Minnesota QB, whoever that is. The Gophers will face a good Middle Tennessee State squad. And they will need to score some points to win.