The many lives of Ohio State's Megan Holstein: BTN LiveBIG 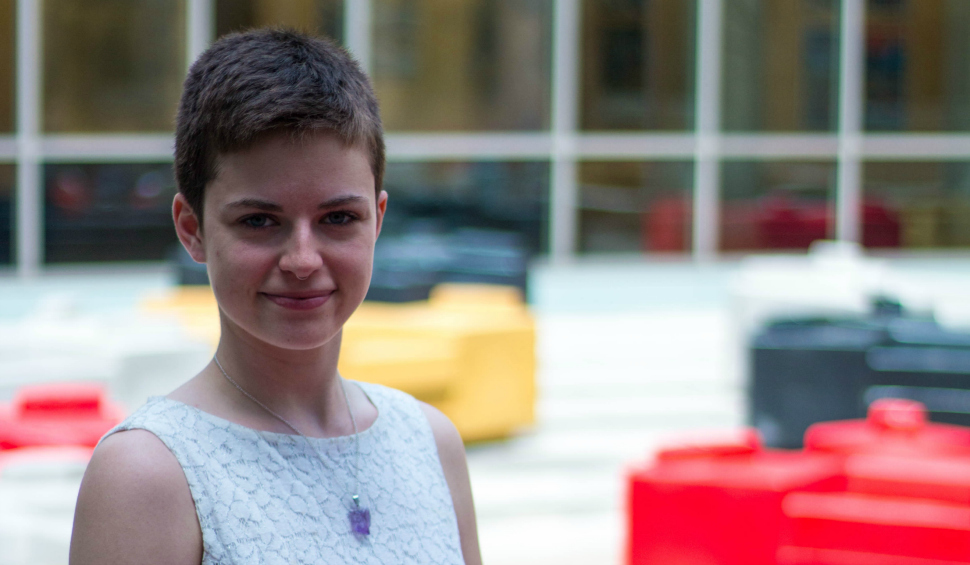 By the time Megan Holstein graduated high school and went to The Ohio State University, she had already successfully launched a software company and written a book about it. By 19, Idea to App was published.

The company she launched, Pufferfish Software, creates affordable apps for people with autism, like Holstein?s brother, who inspired her work.

Holstein graduated from OSU earlier this month and she shared a bit about her journey and her future. In her final years of college she took a bit of a step back from Pufferfish, but she hopes to continue with it in her post-grad life.

BTN LiveBIG: How did you get into developing apps?

Megan Holstein: I quit playing competitive golf when I was 15 years old, and I was spending a lot of my time playing video games. One day my dad said, Megan, you need to do something with yourself … You have to do something if you?re not going to golf. You have to get a job. I was like, I don?t want a job … so I?ll make apps. But I left [that conversation] with this conundrum, what kind of apps was I going to make? So I started looking around for app ideas. My little brother has severe autism, and he was using an iPod for his therapy. At the time, autism apps weren?t any good. In my 15-year-old bluster, I said, I can do better than that.

BTN LiveBIG: What were your next steps?

MH: I bought a coding book from Borders? and I started learning code. I was like, ?This is awful, this is so tedious.? I think it ended up being my idea, I said, ?Hey dad, you hire freelancers on the Internet, can I hire a freelancer to do my code? This is boring.? He said, ?Sure, how much money do you need?? I had no concept of how incredible that was at the time.

He gave me a whopping $100 for me to hire this freelancer; I ended up doing a lot of the work myself. I put the app on the [App Store] - it was embarrassingly bad - but everything else on the market was really unusable, and mine was the most usable solution. I made $150 that month, and I was like, ?Oh my god, free money.? I didn?t connect doing the work to getting the money because all my friends were just punching in at Wendy?s and they were getting paid by the hour, and I just did some stuff and some money happened.

BTN LiveBIG: Tell us a little bit about your company Pufferfish Software and the apps you produce.

MH: The goal of Pufferfish Software was to make apps that are affordable and usable. Like I said, the apps at the time were clunky, they were also quite expensive because they were anticipating [autism patients] would get [their] insurance to help pay.

So I wanted to make apps that were under $10 that people could just buy on a whim to try out with their kids. Our most popular app, Visual Routine, is really just a task manager for kids. You make a list of things that you need to do in your routine; a simple routine might be getting up for school. Wake up, eat breakfast, brush your teeth, make sure your backpack is packed. It?s just a really simple kids to-do list.

Our second most-popular app is Social Stories. It makes a picture book to walk [people with autism] through something in their life. It might have a story for getting on the bus. We take cues from our surroundings on how to act, but autistic patients don?t have that internal sense, they can?t look at others and derive from that how to act. So the story might say, ?When you are on the bus, you sit quietly. If you have a concern, talk to the bus driver.?

BTN LiveBIG: What advice do you give to other college students or recent grads who have an idea to start a business or develop an app?

MH: If you have an idea, be open about it. Talk to people about it, discuss it with other people. Recognize that you?re not the CEO of Google yet and that you could have a lot to learn from the people around you.

Similarly, people think when they have an idea, [they have] to get $100,000 to build this amazing version. No. Just get $100, $1,000, throw something together that really works, only barely, and then get to get feedback on that. No one?s going to remember your barely works, but everyone?s going to complain about it, and you?re going to know by the complaints what needs to be fixed.