Best of Week 1: Plenty of enticing matchups to open 2017 season 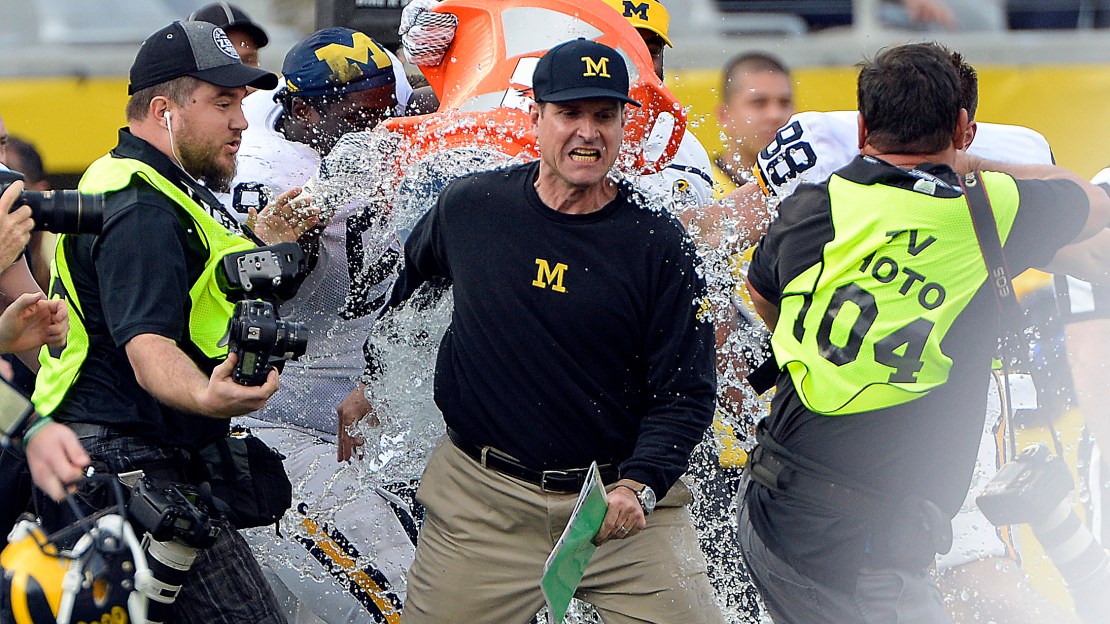 The first week kicks off with a bang with 13 games, including Ohio State at Indiana on Thursday night, involving all 14 teams. And there are several great clashes to whet the appetite and set the table for 2017.

The top attraction is Michigan vs. Florida, two power programs with big dreams this fall. And there are other Power Five clashes with Maryland playing at Texas, Washington at Rutgers and Louisville taking on Purdue in Indianapolis.

Maryland will have its hands full at Texas. Yes, the Longhorns have struggled in recent years, going 16-21 the last three seasons and missing the postseason each of the last two years. But the Longhorns have a new coach in Tom Herman, who went 22-4 the last two years at Houston. And UT always has talent ? lots of talent. The Terps are 0-3 all-time vs. Texas, last playing in 1978 in the Sun Bowl. Maryland last was in Austin in 1959. Interesting fact: The Terrapins have been shutout in each of their three meetings vs. UT, losing by a combined 102-0.

A season-opening game vs. Louisville in Lucas Oil Stadium in Indianapolis is a heck of a way for new Purdue coach Jeff Brohm to kick off his tenure. The Boilermakers aren?t ready for a program like Louisville, which welcomes back Heisman winner Lamar Jackson from a 9-4 team. The storylines in this game are endless. Brohm is a former Cardinal and Louisville native. And U of L coach Bobby Petrino is a mentor of Brohm?s. These teams met once before, playing to a 22-22 tie in 1987 in game that featured Fred Akers vs. Howard Schnellenberger in Ross-Ade Stadium.

The season-opening visit from Washington on Friday night Sept. 1 will be daunting for Rutgers. The Scarlet Knights got an up-close look at the Huskies last year, losing 48-13 in Seattle as U-Dub went on to earn a playoff bid. Chris Petersen will have another good team in 2017.

There also is the aforementioned Big Ten game, with Ohio State playing at Indiana. In fact, the Buckeyes' trip to Indiana on a Thursday night is interesting. IU will square off vs. former coach Kevin Wilson, who is now offensive coordinator for the Buckeyes. OSU has dominated this series. Indiana went 2-1-1 vs. the Buckeyes from 1987-90, including a victory in Columbus in 1987. Since then, the Hoosiers have lost 22 in a row to the Buckeyes. This is a big bite for new coach Tom Allen in his first game as head coach in Bloomington.

Nebraska?s game vs. Arkansas State may not be a breeze. The Red Wolves have gone to bowls in each of the last six seasons and will be paid $1.65 million for coming to Lincoln. NU beat ASU in 2009 and 2012. Still, topping the Red Wolves-where coaches like Hugh Freeze, Gus Malzahn and Bryan Harsin have coached–is no layup.

Best game: A season-opening game vs. Florida in Arlington, Texas, will be a great litmus test for a Michigan team that is in transition at several positions. Making this game more dangerous is the fact the Gators are getting better under Jim McElwain coming off an SEC East title. These storied programs have met three times, all in bowl games. And the Wolverines have won all three, including a 41-7 victory in the last encounter in the Buffalo Wild Wings Bowl after the 2015 season-Harbaugh?s first at Michigan.

Best QB matchup: Defending Heisman winner Lamar Jackson travels up I-65 to play Purdue in Lucas Oil Stadium. And he will take on Boiler QB David Blough, who paced the Big Ten with 517 pass attempts and passing yards per game (279.3) while tossing 25 touchdowns in 2016. However, Blough also threw 21 interceptions. It will be interesting to see how new Purdue coach Jeff Brohm can enhance the skills of Blough.

Best chance for an upset: Iowa needs to be careful when Wyoming comes to Kinnick Stadium. The Cowboys are coming off a bowl and have one of the nation?s top quarterbacks in Josh Allen, who projects as a first-round selection. Allen threw for 3,203 yards and 28 scores and rushed for 523 yards and seven touchdowns in 2016. He will work vs. an Iowa secondary that is being overhauled. Interesting.

Best coordinator clash: Let?s watch first-year Rutgers offensive coordinator Jerry Kill battle Washington defensive coordinator Pete Kwiatkowski. Kill never has been an assistant, so this is a new role for him. And he has a huge task, trying to improve the worst offense in the Big Ten (15.7 ppg and 283.2 ypg). In 2016, the Huskies led the conference in both total defense (316.9 yards per game, 12th in the nation) and scoring defense (17.7 points per game, eighth) in the nation, while also leading all FBS schools in turnover margin (1.29 per game) and takeaways (33). This is a heck of tough first game for Kill and RU.

Best head coach matchup: It will be fun to watch Wyoming?s Craig Bohl take on Iowa?s Kirk Ferentz. Bohl has improved his record each of his three years in Laramie, going 8-6 last year with a bowl. Before that, Bohl went 104-32 in 11 seasons at North Dakota State, winning three FCS national titles. Ferentz is the dean of Big Ten coaches, entering his 19th season in Iowa City.

Player on the spot: Make no mistake about it, this is a big season for Michigan State. The Spartans are coming off a 3-9 effort, missing a bowl for the first time since 2006. MSU has some areas of concern, including line play on both sides of the ball. But the Spartans also need better play from the quarterback. Brian Lewerke is the man for now, and he has a lot to prove.

Best player matchup: It will be fun to watch Indiana LB Tegray Scales track Ohio State running back Mike Weber. Scales eschewed the NFL to return to Bloomington after pacing the Big Ten with 126 tackles and 23.5 TFLS with seven sacks. Weber was the 2016 Big Ten Freshman of the Year after rushing for 1,096 yards.