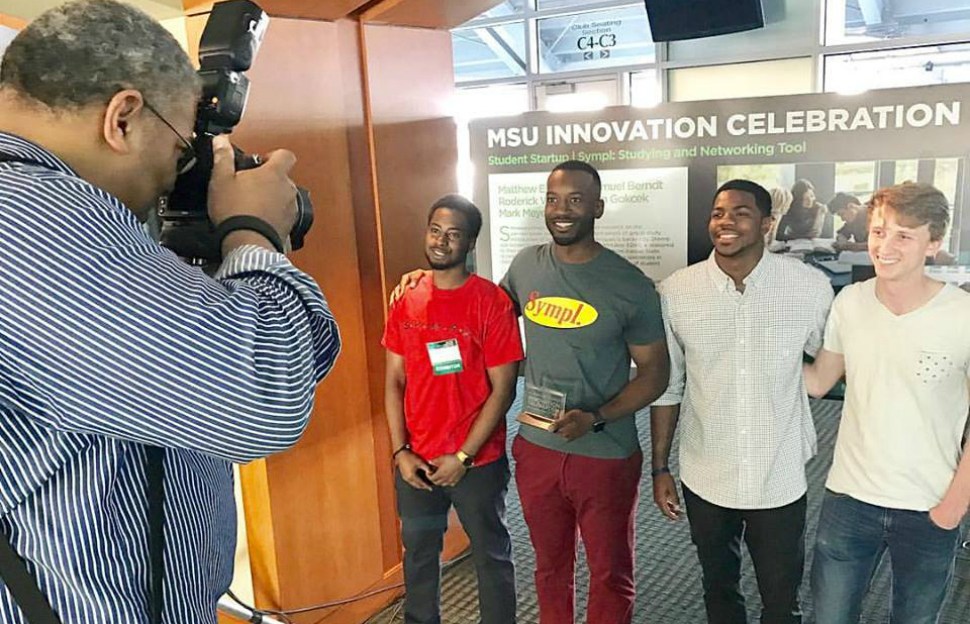 Go to practically any college or university campus these days and you?re bound to find a bevy of students working on what they hope will be the next great app. We?ve covered our fair share of these enterprising apps, from those looking to make campuses safer to those meant to protect the health of athletes.

Recently, a group of Michigan State University students rolled out an app that aims to create communities of learning across campuses, bringing students together to strengthen their studies.

The Sympl. app was created by two former Spartan football players, Matthew Eleweke and Mark Meyers who both, after a brief hiatus, returned to the school to pursue degrees in advertising. Based on the existing Spartan App, which informs students of pertinent campus information like bus schedules and emergency alerts, Eleweke and Meyers decided to concentrate their efforts on connecting classmates looking for group study opportunities.

With Sympl., students create a profile and then select their classes from an easy-to-use drop-down menu of all of the courses the university offers. From there, they can connect with classmates to form study groups, share notes and class information and get help with assignments. Further expansions to the app include a ?Live Study? feature allowing students to locate study groups on campus in real time.

?We want to be the leader in the ed-tech market,? said Eleweke, speaking to the Detroit Free Press. ?We are a mobile app right now, but we?re bigger than that. We?d like to be viewed as a social cause that promotes effective communication within classes for students. Our main focus is to provide the necessary resources for students to reach their academic potential.?

Eleweke and Meyers fine-tuned their app at The Hatch, the entrepreneurial resource hub of the Spartan Innovation Center, and, as of August of 2016, have been operating a beta version of Sympl. on the East Lansing campus. Sympl. was also one of only a handful of apps selected to represent the university at the South by Southwest Tech Industry conference in March.

?We?ve definitely had a lot of support along the way,? Meyers said. ?They see we?re grinding to get our product out there. And people want to help. That?s the main thing we?ve found about it. If we get in front of the right people and people who want to help, it can go pretty far.?

Newly minted graduates of MSU, Eleweke, Meyers along with the Sympl. administrative team are working hard to launch the app on two other campuses, Arizona State University and the University of Texas. Additional interest has been shown by another 20 U.S. and international colleges and universities.

?People have been very receptive of our ideas,? Eleweke said. ?We?ve been able to build some really good connections - not only here in Michigan but at other schools and universities that really just want to see this succeed. They expressed a great need for it.?