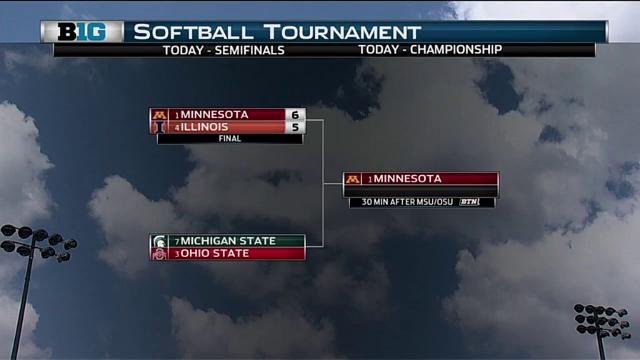 For the third time in the last four years, Minnesota is the Big Ten softball tournament champion.

The Golden Gophers, who rallied past Illinois, 6-5, in the semifinals, shut out Ohio State, 6-0, in the tournament final Saturday night in Ann Arbor, Michigan.

You can view the full bracket here, and watch all of the tourney's best highlights and interviews.

Saturday's results can be viewed below.

Sara Groenewegen was her typical self en route to shutting out Ohio State, 6-0, in the Big Ten tourney final Saturday night in Ann Arbor, Michigan.

The Big Ten Pitcher of the Year allowed two hits and struck out 12 batters to become the program's all-time career leader in strikeouts.

At the plate, Sydney Dwyer belted her third home run of the day to pace the attack.

Minnesota has won three of the last four Big Ten tournament titles, and it earns the conference's automatic bid to the NCAA tournament with the easy victory.

Sydney Dwyer hit a pair of home runs, including the walk-off winner, to send Big Ten regular-season champ Minnesota past Illinois, 6-5, and into the Big Ten tournament final.

Illinois led 2-1 before Big Ten Player of the Year Kendyl Lindaman blasted a go-ahead grand slam, her 20th long ball of the season, in the bottom of the fourth. The Illini tied the score on Stephanie Abello's three-run homer in the top of the fifth.

Then came the seventh inning, when Dwyer connected on her second home run.

Big Ten Pitcher of the Year Sara Groenewegen recorded the win out of the bullpen, going two scoreless innings.

Ohio State jumped out to a 4-0 lead and managed to hold on for a 4-3 victory Saturday in the Big Ten tournament semifinals.

The Buckeyes will play Big Ten regular season champ Minnesota, which rallied to beat Illinois, in the tourney final.

Lilli Piper went 3-for-4 and drilled a two-run home run in the first inning to get the Buckeyes off to a fast start. After Ohio State put up another two-spot in the sixth inning, Michigan State, as it has done each of the previous two days, rallied with three runs. But Shelby McCombs shut to door to preserve the lead and send the Buckeyes to the title game.