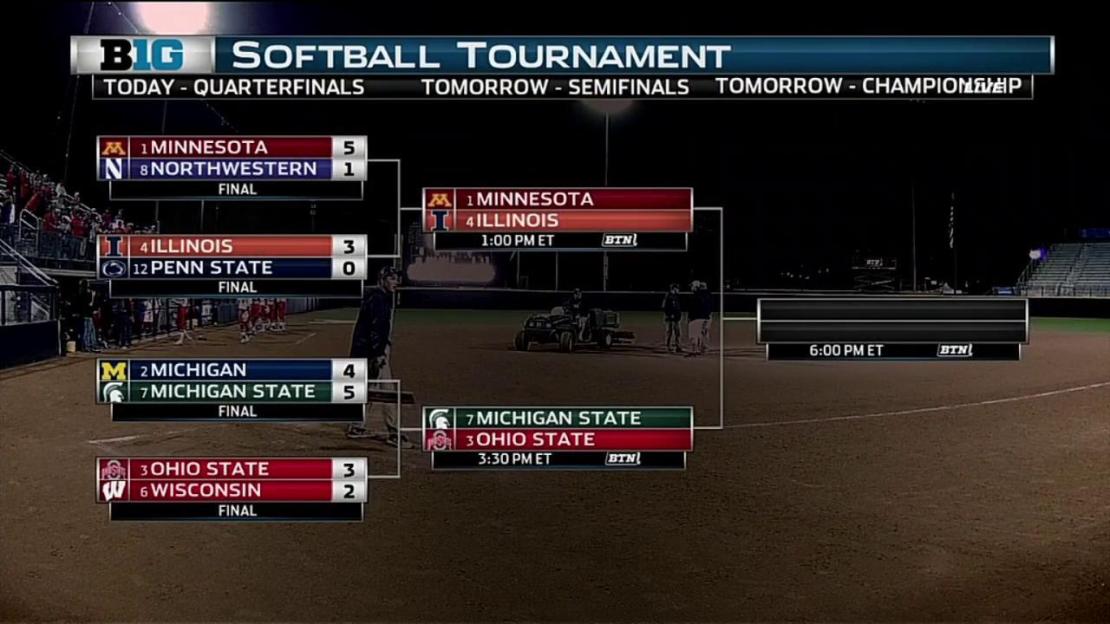 You can view the full bracket here, and the entire tournament will be broadcast live on BTN and streamed on BTN2Go. Click here for a complete schedule of games on BTN2Go.

Friday's results can be viewed below, with game recaps via bigten.org.

Big Ten Pitcher of the Year Sara Groenewegen tossed what is believed to be the first no-hitter in Big Ten Tournament history as conference champion and top-seeded Minnesota defeated No. 8 seed Northwestern, 5-1 in a quarterfinal game on Friday at the Wilpon Complex/Alumni Field in Ann Arbor, Michigan.

Groenewegen struck out 11 batters and walked two in pitching her eighth career no-hitter. She took a perfect game into the seventh inning before allowing a leadoff walk on a 3-2 pitch to Northwestern?s Sabrina Rabin. The Wildcats (25-29) broke up the shutout when Rabin, who moved to second on a groundout and to third on a strikeout/wild pitch, scored on Morgan Nelson?s foul sacrifice fly to left field.

Maddie Houlihan had three hits and Big Ten Player and Freshman of the Year Kendyl Lindaman drove in two runs with a single in the sixth to highlight a three-run insurance frame for the Golden Gophers (52-3).

Nicole Bond kept Northwestern in contention much of the day before tiring in the sixth inning. She took the loss after allowing five runs on 10 hits in 5.1 innings of work.

Fourth-seeded Illinois scored twice in the first inning and rode the strong pitching of Breanna Wonderly to a 3-0 win over No. 12 seed Penn State in the Big Ten Tournament quarterfinals on Friday at the Wilpon Complex/Alumni Field in Ann Arbor, Michigan.

The Fighting Illini (37-17) will make their first trip to the Big Ten Tournament semifinals since 2004 when they face Big Ten Champion and No. 1 seed Minnesota at 1 p.m. (ET) Saturday live on BTN.

Wonderly gave up hits to the first two Nittany Lion batters of the game, but settled in from there, twirling a complete-game, three-hit shutout while striking out four. The Centerview, Missouri, native set down 14 consecutive Penn State batters between the first and sixth innings to earn the victory in the circle.

Alyssa Gunther delivered a RBI triple in the first and then scored on Ruby Rivera?s suicide squeeze bunt. Rivera then drove in an insurance run for Illinois in the fifth with a single through the left side.

For the second day in a row, No. 7 seed Michigan State used a late-game rally to pull out a Big Ten Tournament victory, scoring three times in the top of the seventh inning to defeat second-seeded Michigan, 5-4 in the third tournament quarterfinal on Friday at Wilpon Complex/Alumni Field in Ann Arbor, Michigan.

Kaitlyn Eveland drove in the eventual winning run with an RBI single to left in the seventh, giving Spartans? head coach Jacquie Joseph her 800th career victory. It also sent Michigan State (31-21) to the Big Ten Tournament semifinals for the first time since 2008, with the Spartans advancing to play at 3:30 p.m. (ET) Saturday live on BTN.

Megan Betsa took the loss in the circle for Michigan (41-11-1), going all seven innings and giving up five runs on eight hits with six strikeouts.

Third-seeded Ohio State scored three times in the second inning and held off a determined Wisconsin squad for a 3-2 win over the No. 6 seed Badgers in the last Big Ten Tournament quarterfinal on Friday night at the Wilpon Complex/Alumni Field in Ann Arbor, Michigan.

Ohio State scored three unearned runs in the second, with Anna Kirk driving in the final tally on an RBI single to center. Wisconsin (33-15) pulled within a run in the sixth inning on Stephanie Lombardo's two-run single to right-center, but Lombardo was thrown out by Taylor White trying to stretch her hit into a double, the second outfield assist of the game for White.

Kaitlyn Menz took the loss in the circle for the Badgers despite not allowing an earned run and just five hits while collecting seven strikeouts.