James Franklin Q&A: 'We feel like the line is a strength for us' 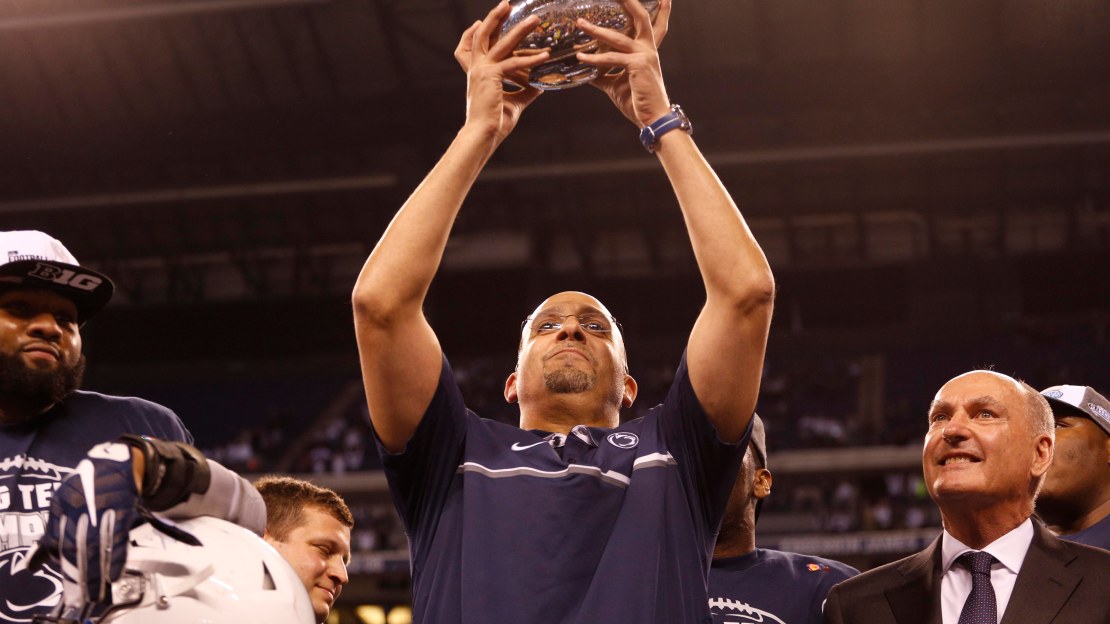 It took James Franklin just three years to deliver a Big Ten championship to Penn State. Now, can he repeat? Possibly, as most of the key cogs from last season are back led by QB Trace McSorley and RB Saquon Barkley on offense, along with an improving line.

Retaining rising star coordinator Joe Moorhead was big, too, as some schools sniffed around the hot commodity. The defense should continue to improve for one of the most exciting and upwardly mobile programs in America.

I caught up with Franklin at the conclusion of spring drills.

Q: What were you pleased about in spring ball?
A: Trying to figure out how we were going to replace Chris Godwin. Juwan Johnson really stepped up for us there (at receiver). He had a really good spring. We always knew he was talented, but he took the next step. We feel good there. We were able to create more depth at tight end. We know what we have in Mike Gesicki. John Holland really stepped up. He took a bunch of reps and really improved. We feel good there. We were able to figure out what these mid-semester guys could do. (Five-star DB) Lamont Wade had a strong spring for us. He made a bunch of plays for us. (Three-star OL) Mike Miranda was the surprise of the spring. You never know what you?ll get from offensive linemen. But he battled and took some reps with the first unit and did well.

Q: The offense made big strides last year (ranking No. 3 in the Big Ten in scoring, 37.6 ppg, and No. 2 overall, 432.6 ypg). What's the next evolution of the attack?
A: You always are adding and tweaking. There will be no dramatic changes, but we will look for things that complement what you are doing. We always base stuff on the line. And we looked at what we could add that wouldn?t create any added challenges or issues for the line. We feel like we have done that. The biggest difference is that for the first time since I have been here, we feel like the line is a strength for us. And that?s scary when you think of what Saquon Barkley has been able to do with a still evolving line (2,572 yards rushing in two seasons). When I got here, I think we had just seven scholarship offensive linemen. We had to add two d-linemen to get to nine. This is the first year we feel like that unit can be a strength for us.

Q: You inherited a program in 2014 still recovering from NCAA sanctions and you went 14-12 overall and 6-10 in the Big Ten your first two seasons. But last year, you forged an 11-3 mark with an 8-1 Big Ten record, league title and Rose Bowl bid. Are you ahead of schedule?
A: We handed out the (Big Ten championship) rings at the spring game. And we aren?t talking about that ever again. That is in the past for us. We are focused on this season and building this thing. Timelines are for other people to determine. We are just focused on doing what we can to get ready for 2017 as if 2016 never happened. We still want to be a hungry, blue-collar team and detail-oriented team that we have been in the past. Don?t get me wrong, we want to use those experiences from last year and grow from them. But it?s time to move on because it doesn?t matter anymore.

Q: How will Penn State deal with now being the hunted?
A: It is magnified in general just because of our program, especially our division. When you are competing with Michigan State, Ohio State, Michigan, it magnifies it. Our rankings probably will be different this preseason than last year. But preseason rankings don?t mean a thing. It probably changes how people view us. No doubt about that. But you don?t want your approach or preparation to change based on who you are playing. But I do understand it in how people will perceive and approach us.

Q: How do you feel about the early signing period?
A: I get it. But I worry that there may be a lot of unforeseen consequences that come with these things. People may consider me a young coach, but I kind of have an old-school mentality. I like the system we had. I did think there was a place for early visits. People didn?t want to add an early-signing period without early visits. I get it. But I worry about the unforeseen consequences of the decisions we are making.