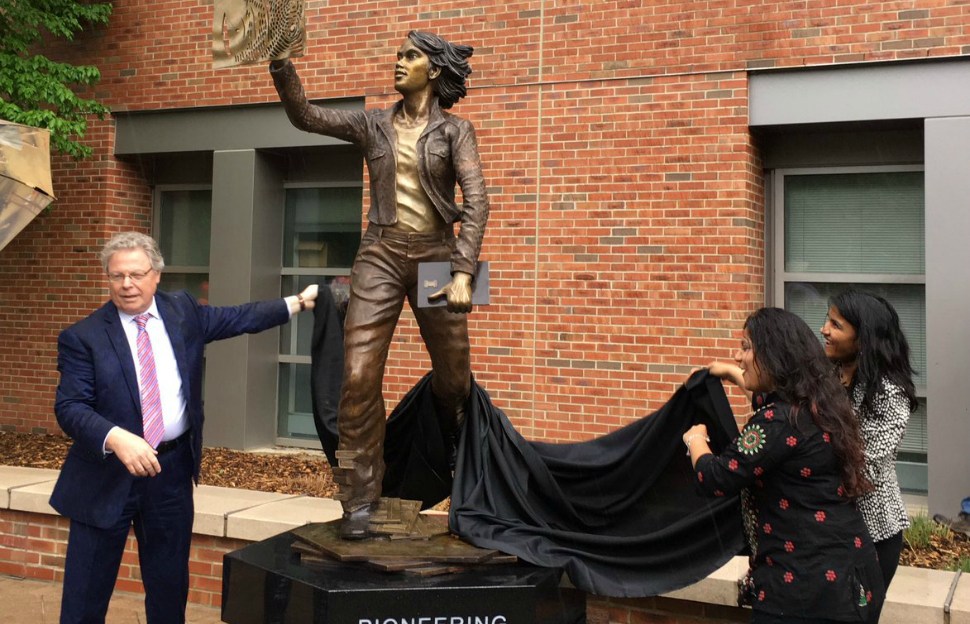 The University of Illinois at Urbana-Champaign?s famed statue, Alma Mater, just got a sister and she?s already creating quite the buzz.

Located outside the Micro + Nanotechnology Laboratory, ?The Quintessential Engineer? is the culmination of four years of work by UIUC electrical engineering graduate student Sakshi Srivastava. In 2013, while still an undergraduate, Srivastava started a campaign to erect a statue that would serve as a beacon to young women studying and pursuing careers in the often male-dominated world of engineering.

?I stumbled across an article about how public art conveys the sentiments of a community,? Srivastava said in a press release from Engineering at Illinois. ?I realized that having a statue erected can show our commitment to younger students that we endorse their dreams.?

The statue was created by Chicago-based artist Julie Rotblatt-Amrany and was funded by a gift from the Texas Instruments corporation. Of her design, Rotblatt-Amrany had this to say:

?The face, the expression is one of wonder, exploration, and knowledge, one of curiosity and perseverance. She represents a multi-racial female, a young professional woman at work? always thinking, on the move.?

?This piece is meant to engage the University?s students, faculty, and visitors. It reflects the era in which she is from. It is about the engineer?s journey. There is space for the observer to interpret what will be in her future; it allows for mystery and engagement.?

For her part, Srivastava started an online petition to gauge public support and crafted resolutions passed by both the UIUC Student Senate and Academic Senate. Those resolutions asked the College of engineering to consider the feasibility, logistics and overall design of the proposed piece of art.

?The Quintessential Engineer,? says Andreas Cangellaris, dean of the College of Engineering, is a natural extension of the work the university has done in recent years to confront stereotypes and encourage diversity in the field.

?The new statue celebrates women engineers and their contributions to bettering our world through engineering,? he says. ?For the past several years, Engineering at Illinois has worked hard to increase the diversity of both our students and faculty, especially the number of women who chose engineering as their profession. We very much appreciate this gift from Texas Instruments as it reflects their interest and support for these efforts.?