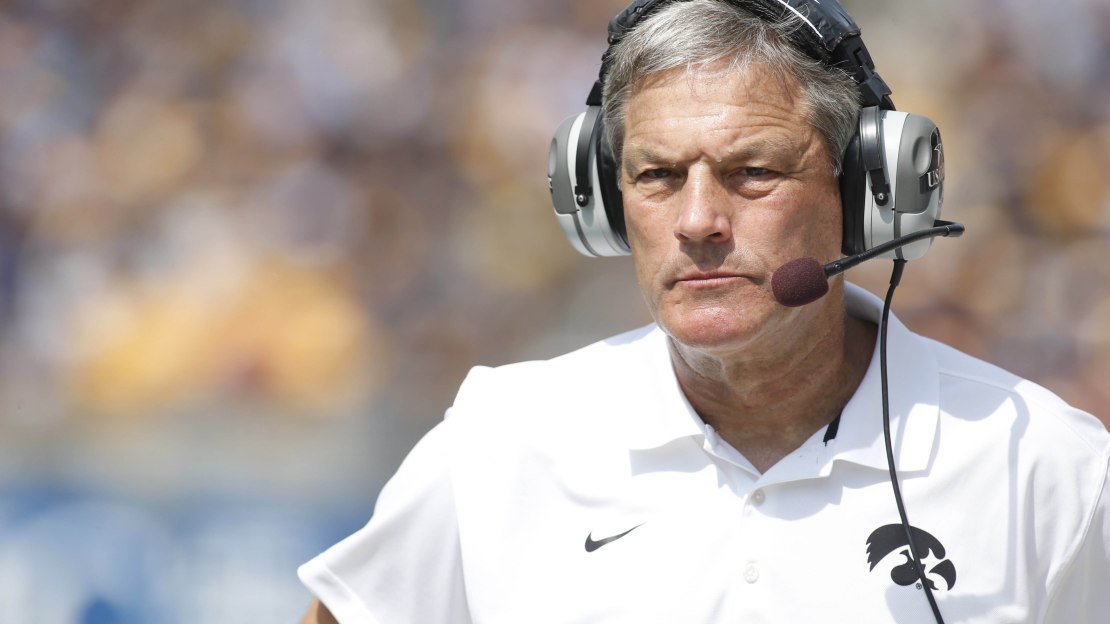 IOWA CITY, Iowa — This will be an interesting year in Iowa City, as Kirk Ferentz has an overhauled offensive staff.

In fact, just one offensive assistant who coached the same position as last year is back: TE coach LeVar Woods. Add it all up, and 2017 shapes up as a fascinating season, as the Hawkeyes look to amp their offense.

There is work to be done. Here are five observations from Friday?s spring game.

1. Quarterback: The race to replace C.J. Beathard will continue into August. The odds-on favorite to win the job in the eyes of many Iowa watchers is probably sophomore Nate Stanley, who was the backup last year for Beathard. But, the staff has indicated that it's a wide open competition, so don?t count out junior Tyler Wiegers, who is niftier than Stanley and a smart player. Still, most believe it's the 6-5 Stanley's job to lose. Stay tuned. Neither wowed tonight. Unofficially, Stanley hit 6-of-16 passes for 17 yards with a TD and pick; Wiegers competed 11-of-19 for 94 yards with two picks.

2. The receivers need to step up. The search for playmakers at wideout seems perpetual. Senior Matt VandeBerg is back after the medical redshirt. He's the top guy by a mile but injury kept him out of tonight?s game. After VandeBerg? Keep an eye on Jerminic Smith, who kind of had a disappointing sophomore year. But like VandeBerg, Smith was out tonight, as he is dealing with academics. Newcomer Nick Easley has impressed his spring. Keep an eye on him. Sophomore Devonte Young is solid but probably is just a ?guy.? After that, there isn?t much proven and there will be a real opportunity for a freshman to come in and play.

3. This is a nice collection of tight ends who will be utilized often. The staff kind of started adjusting to the future later last year when George Kittle was banged up. Noah Fant is probably going to be the top pass-catching TE. He looked good in limited duty as a true freshman in 2016. Junior Peter Pekar will likely be in the top three. He is a nice athlete. Look for the coaches to try to hit these tight ends down field for some big plays. Saw some glimpses tonight.

4. The defensive tackles could be an issue: One sure thing looks to be senior Nathan Bazata, but he was out. After that, it's somewhat wide open. The best bet to fill another slot is probably sophomore Cedrick Lattimore, who would fill the hole replacing Jaleel Johnson. Physically, he's the most like Johnson in terms of a bigger body, but he's also young, just finishing up his freshman year. And keep an eye on sophomores Brady Reiff-who was out tonight. These guys need to protect a good-looking group of LBs and not let the Iowa defense get run over.

5. There is a nice collection of running backs. Akrum Wadley is a tough back with big-play ability-but he was hands-off this spring. The staff needs to find ways to get him the ball in space this fall, as he is the most dynamic weapon on this offense. He may be on the field at the same time as other backs, as Toren Young is a big, strong option and Toks Akinribade had potential, too. Both looked good on this night. This is a nice trio that must excel behind a veteran line that has four starters back. No doubt, RBs are a strong point.