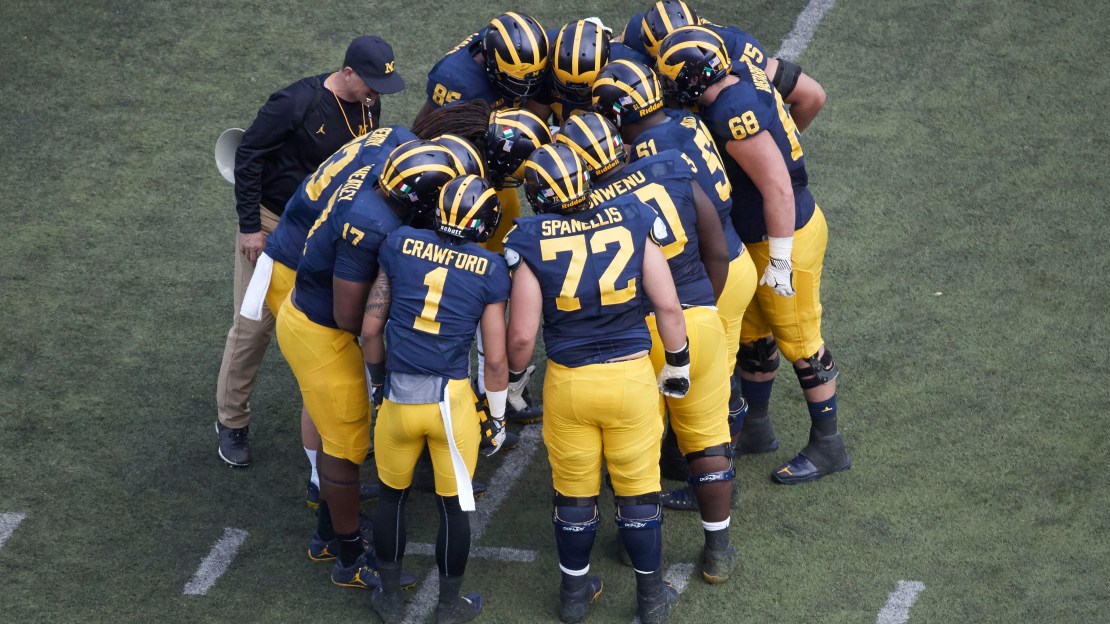 Jim Harbaugh is digging in on his third season in Ann Arbor in search of the program?s first Big Ten title since 2004. The losses for Michigan are staggering coming off a second 10-win season in succession.

The 2017 season shapes up as a transition season for the Wolverines, losing talent like LB/S Jabrill Peppers, CB Jourdan Lewis, TE Jake Butt, OT Erik Magnuson, DE Taco Charlton and DE Chris Wormley, all of whom earned first-team All-Big Ten honors for the media, coaches or both. Harbaugh?s squad continued the process of building toward the fall with a spring game on Saturday.

1. Michigan has promise at wideout. The attack lost top targets in Jehu Chesson and Amara Darboh, but there is some nice young talent. And it was on display in the spring game. Early enrollees Donovan Peoples-Jones and Tarik Black turned some heads and look primed to be contributors this fall. Kekoa Crawford and Eddie McDoom are the assumed starters, but the competition is real at this spot.

2. Brandon Peters is a good-looking young quarterback. The redshirt freshman impressed, hitting 9-of-17 passes for 160 yards with a touchdown and a pick. It looks like Peters will be the No. 2 man, wrestling the job from John O?Korn. Now, can Peters man a run at Wilton Speight?s starting spot as the attack adjusts to new pass-game coordinator Pep Hamilton? Interesting.

3. The offensive line has potential and some veteran talent. The unit battled through some injury issues this spring. Mason Cole, Michael Onwenu, Ben Bredeson and Patrick Kugler are a nice foundation for a unit that too often failed to get a consistent push in the run game vs. more marquee teams last season. Mason has moved back to left tackle from center with Kugler taking over the pivot. Onwenu and Bredeson are the guards. Juwann Bushell-Beatty should be the right tackle but was out. The arrival of assistant Greg Frey from Indiana should help. He is a good one and has worked in Ann Arbor in the past. The unit did a good job run blocking on Saturday, but the pass blocking was lacking.

4. There is work to do across the defense. And for good reason, as the unit lost a lot of key players. But one guy who looks good is linebacker Devin Bush, who is part of a unit that has increased speed. Don?t be shocked if Bush garners some All-Big Ten honors this season. He has athletic ability, smarts and instincts.

5. The defensive line is looking good. Rashan Gary figures to take the proverbial next step in his development after arriving on campus as the nation?s No. 1 recruit last year. Bryan Mone is a powerful anchor on the inside along with Maurice Hurst, and Chase Winovich is a key player off the edge. But depth needs to be developed, as guys like Carlo Kemp and Ron Johnson need to provide support. And just wait until stud recruit Aubrey Solomon arrives. Count on line coach Greg Mattison getting this group in shape and ultimately being one of the best fronts in the Big Ten, again.