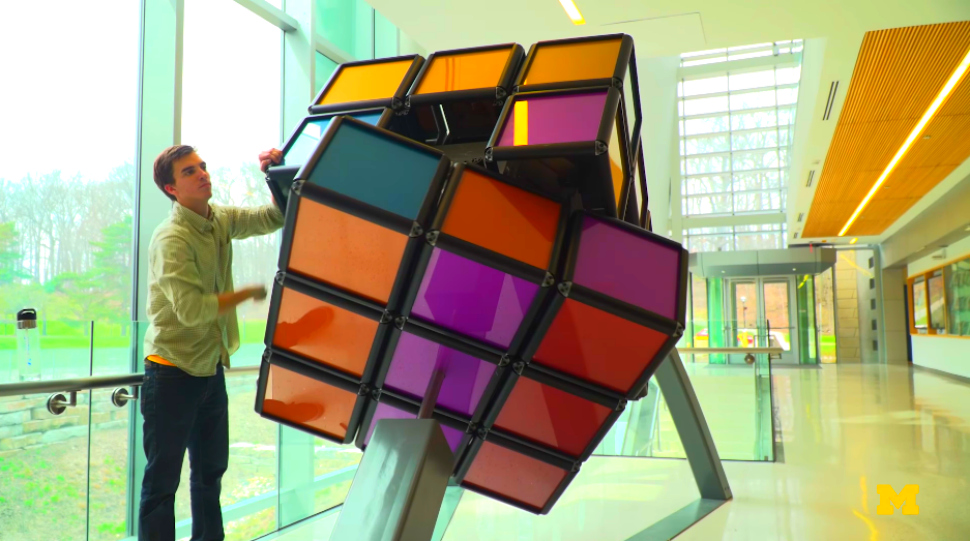 The University of Michigan is now home to not one, but two giant cubes.

The first is, of course, artist Tony Rosenthal?s iconic, spinning Endover, a triumph of interactive, kinetic design that dominates Regents? Plaza outside the Michigan Union.

The newest entry into UM?s collection of cubes, though, will strike many as familiar, in a puzzling sort of way. That?s because this labor of love from a group of mechanical engineering students is a massive - and solvable - Rubik?s Cube.

The initial idea for the installation came over three years ago when students Samuelina Wright and Martin Harris, both Rubik?s Cube fans, were looking for a senior capstone project. Teaming with fellow students Kelsey Hockstad and Dan Hiemstra, the group worked for two years designing and fabricating the piece. Although the original crew graduated before the project was complete, a new team of students took up their work and fine-tuned the cube into its final, working form.

"This is a truly amazing and unique kinematic mechanism that functions as a Rubik's cube," says Noel Perkins, the Donald T. Greenwood Collegiate Professor of Mechanical Engineering and adviser to the students, speaking to the University of Michigan News.

"There is no other human-manipulable cube like this, to the best of our knowledge. That said, it is not technically the largest cube. We're aware of a larger cube that requires the user to literally roll it on the ground to solve and rotate the faces. None of that is required by our stationary design. So to be very precise, it is the world's largest stationary, human manipulable Rubik's cube."

Through the course of planning, the students realized that simply constructing a Rubik?s Cube writ large would not be functional due to friction encountered at such a size. So, the students designed a unique system using rollers and transfer bearing to allow for ease of use. The second team of engineers – Jason Hoving, Ryan Kuhn and Doug Nordman - designed and built the stand that houses the puzzle.

The cube, which sits outside the G. G. Brown Building on UM?s North Campus, is more than just a novel work of art and design, says team leader Harris. It?s a testament to the spirit of collaboration alive in Michigan engineering.

"The point of making a Rubik's Cube so large was primarily to introduce teamwork to the puzzle-solving process. Real world problems can rarely be solved without the cooperation of several different people. It's a simple idea, but one that is crucial to science, technology, engineering and math fields."