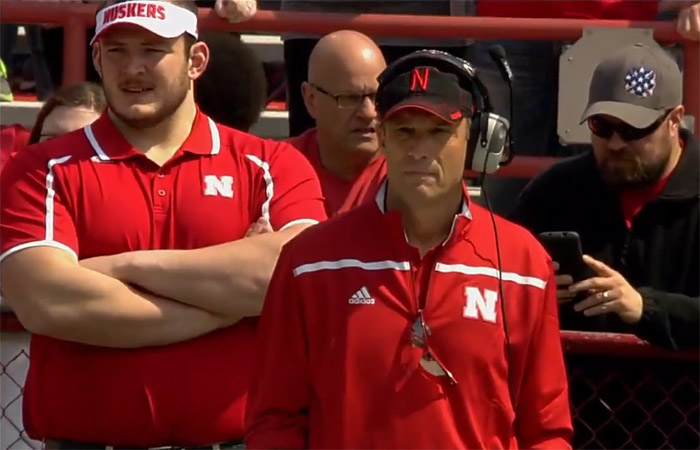 (AP) Anyone trying to forecast Nebraska's quarterback competition between Tanner Lee and Patrick O'Brien didn't glean much from the spring game Saturday.

O'Brien played the first series with the No. 1 offense, but that was only because he won a coin flip in the locker room.

Lee threw the best ball of the day when he fit a 30-yard pass to JD Spielman between cornerback Decaprio Bootle and the back corner of the end zone.

Each quarterback went against a very basic defense, neither committed a turnover, and they ended up with similar numbers.

Coach Mike Riley has said he expects to name a starter before the summer. He offered no clue which way he and offensive coordinator Danny Langsdorf were leaning.

"This week will be summary time for us and a planning time, and we'll have discussions about our team," Riley said. "I'm sure that will be one of the talking points."

"I think I did pretty good," Lee said. "There were some throws I shouldn't have made, but I think I did all right. We were scoring points. I was happy with that."

O'Brien said he was pleased with the work he put in this spring.

"All the coaches have said I've done a good job," he said, "so I've got to keep it rolling and bring it into fall camp… If that means I'm the starting quarterback, (that's good). If it doesn't, obviously I'll be really disappointed, but I've got to control what I can control."

Regardless of who wins the QB battle, the Huskers are moving more into the pro-style system that Riley envisioned when he came to Nebraska from Oregon State in December 2014.

"The tight end, for what we do, can both be a guy who can be productive and be a threat," Riley said.

"This game now, being on TV, it just becomes another scouting tool for all our opponents next year," Riley said. "So there was no way we wanted to do anything that was out of the box at all. We didn't want them to see what blitzes, all the different fronts, we've practiced this spring. I'm kind of sorry to have to say that, but that's the way it is."

Attendance of 78,312 was second-highest for a spring game at Nebraska.

Other observations from the spring game:

KEEP EYE ON GEBBIA: Gebbia, a freshman who enrolled in January, got the most work of any QB and showed flashes of why he was a four-star recruit coming out of Calabasas, California.

He led the lower-unit offense on its only touchdown drive, a 12-play, 75-yarder against the No. 1 defense. He played six series with the White team and one with the Red and finished 28 of 45 for 268 yards and a TD.

Riley said Gebbia will prepare as if he might have to play in an emergency, but the hope is that he redshirts.

GIFFORD'S BIG DAY: Luke Gifford, in line for a starting job at outside linebacker, was playing with a cast on his hand, but he showed up time and again in the first half. He stripped Keyshawn Johnson Jr. after a short pass and recovered it himself, sniffed out a screen and threw Wyatt Mazour for a 2-yard loss and on the next play intercepted Gebbia and returned it 24 yards.

FAMILY REUNION: The most emotional moment of the afternoon occurred just after the coin flip when Nebraska Army National Guard Staff Sgt. Matthew Hawke, dressed in a white Huskers uniform with jersey No. 10, took off his helmet and surprised his family. Hawke and the rest of the Lincoln-based Company G, 2-104th General Support Aviation Battalion returned Saturday after having gone to Afghanistan last June.

Tears all around, Hawke embraced wife Nicole and their six children.