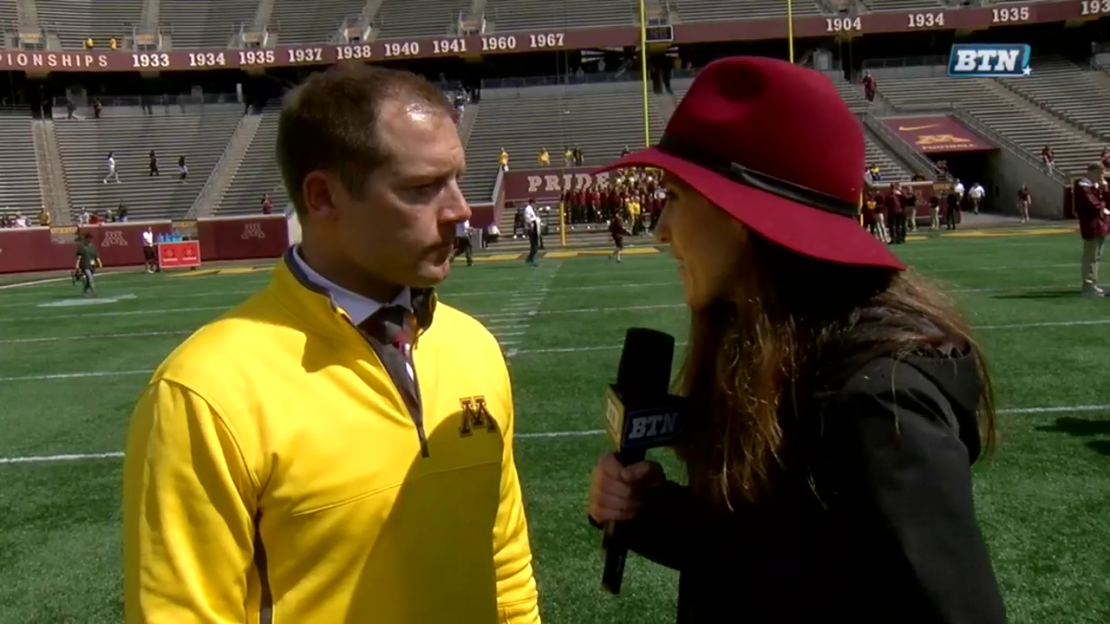 MINNEAPOLIS - P.J. Flock kept on smiling. He was in his element. Just P.J. Fleck being P.J. Fleck as he signed autographs in one end zone of TCF Bank Stadium.

?How are you doing? Fleck asked a young child. ?Thanks for coming out today.?

And so it went, the line of pen- and program-toting fans wanting to meet Fleck stretched well past the giant block ?M? across midfield on a sun-splashed Saturday afternoon following the conclusion of his first spring game.

Everyone wanted a piece of Fleck on this day. Why not? This is a man who has fully embraced this state, this city and this program. This is a man who has the cachet and charisma seasoned veteran of Capitol Hill. If you close your eyes while Fleck ambles on about stuff like ?running into, not away from, the fire? or any number of his kitchy phrases, you?d swear you were listening to a Tony Robbins tape.

Corny? A bit. But Fleck speaks with conviction about ?eating difficult conversations for breakfast? and "having a crack not a chip on his shoulder? that you know he believes everything he says-and so do his players. That?s all that matters.

Indomitable. Unrelenting. Boundless. Those are just a few of the words that come to my mind when watching Fleck in his first Minnesota spring game. Even legendary 97-year-old Twin Cities scribe Sid Hartman was poised in his press box perch for this, often peering through his binoculars at a 36-year-old sunglasses-wearing coach who has the energy of a 16-year-old.

Donned in a banana yellow pull-over with a shirt and tie, Fleck was a man in motion, always on the go, full sprint in leading his team on the field. The energy is inspiring. And, Fleck?s arrival also has inspired some high hopes from Gopher faithful: Is this guy who can finally deliver Minnesota to big things?

It has been a long time since they were shouting Ski-U-Mah! in Pasadena. In fact, you have to go back to the 1961 season. And pardon the dust as you relive the Golden Gophers? last Big Ten title in 1967 with legendary Murray Warmath as head coach. Since then, schools like Northwestern, Purdue, Wisconsin, Iowa, Penn State, Michigan State ? well, heck, just about everybody has won the Big Ten since the last time Minnesota did it.

After Warmath left, Cal Stoll tried ? and failed. So did Joe Salem, Lou Holtz, John Gutekunst, Jim Wacker, Glen Mason, Tim Brewster, Jerry Kill and Tracy Claeys. Some came closer than others to getting Minnesota over the proverbial hump. What if Holtz had stayed instead of bolting for the Golden Dome after the 1985 season? While others seemed overmatched (Brewster) or a miscast (Wacker) from the start.

What in the name of Bernie Bierman is going on here?

Now comes a dripping-in-promise head coach in Fleck who is bouncing catchphrase after catchphrase off the walls of the locker room. Fans and players are bombarded with a lexicon that includes:

Snicker when you hear his mantras. It doesn?t matter. The bottom line is this: Fleck wins. He went 30-22 overall and 21-11 in the MAC with three bowls the last four seasons. Fleck even did the impossible: He made Western Freaking Michigan a national story by guiding the Broncos to a 13-1 record and berth in the Cotton Bowl last season in a campaign that saw WMU finish No. 15 in the AP poll.

So, the thinking goes something like this: If Fleck can do all of that in tiny Kalamazoo, Michigan, while coaching a MAC team ? what can he do at a Big Ten school that is enriched with many more resources?

Fleck walks into a decent situation at Minnesota. This isn?t the rebuild job that Jeff Brohm faces at Purdue. Nope. Fleck inherits a squad that went 9-4 overall and 5-4 in the Big Ten last season under Tracy Claeys. But there are some issues to address.

What?s going to happen at quarterback with Mitch Leidner gone?

The offensive line had just five healthy bodies on this day. Will it be OK?

Can a rebuilt secondary live up to the standards set by the unit the last three to five years?

The Gophers should no doubt reach a bowl next season. And don?t bet against Minnesota doing much more than that very soon under Fleck, who even had the word ?Elite? on the back of his shoes today.