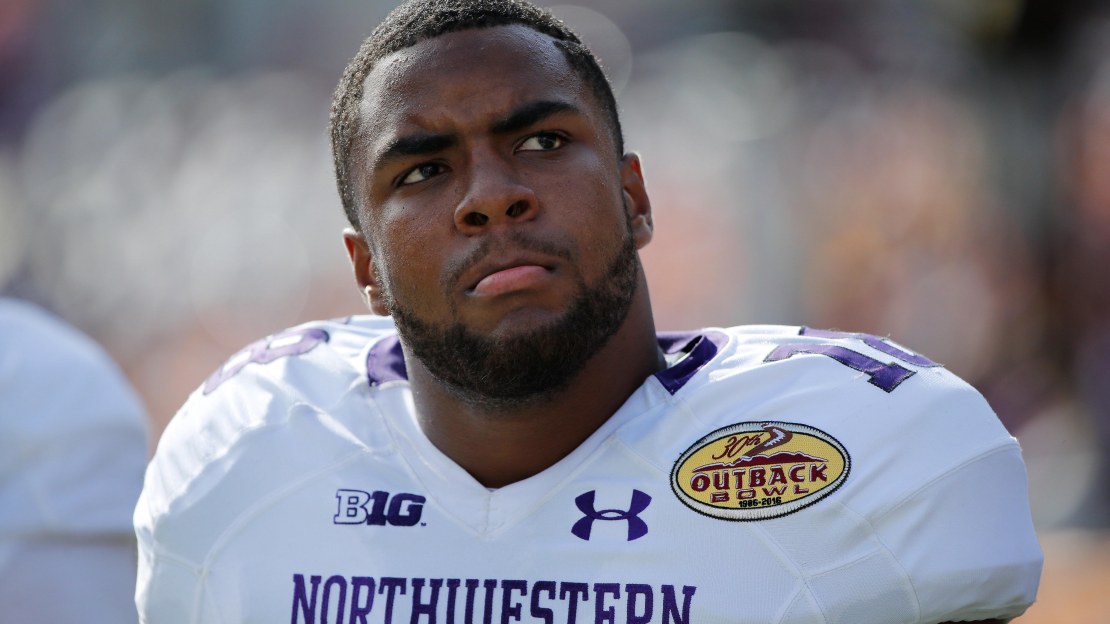 The NFL draft will take place from April 27-29 in Philadelphia. Who is the top prospect for each Big Ten school? I take a look, beginning with the Big Ten West. I will look at the East on Wednesday.

ILLINOIS
OLB Carroll Phillips. A terrific athlete, Phillips was an end in Champaign, so he must transition to playing mostly on two feet at the next level. He has great burst and speed off the edge and could be a good outside linebacker in a 3-4 scheme. Phillips was All-Big Ten first team (media), the first Illinois first-team selection since 2011. He had 56 tackles, 20.0 TFLs, 9.0 sacks, 3 QB hurries in 2016. He tied Simeon Rice (1994) and Moe Gardner (1989) for the fifth-most TFLs in an Illinois season (20.0). The 6-3, 242-pound Phillips-the No. 12 overall OLB by CBSSports.com–figures to go in the fourth or fifth round, when Illini DE Dawuane Smoot also may go.

IOWA
DT Jaleel Johnson. The NFL is always starved for playmaking tackles. And Johnson could be a good one. He has good quickness and size (6-3, 316), showing a knack for making plays. And Johnson also can push the pocket. Given the starting role as a junior in Iowa City, Johnson garnered honorable mention All-Big Ten honors (45 tackles, 5.5 for loss, four sacks). He progressed in 2016, being named first-team all-conference after leading the club with 10 tackles for loss and 7.5 sacks. Impressive for an interior player. Johnson projects as a third-round pick, according to CBSSports.com, which has Johnson as the No. 10 DT in the draft.

MINNESOTA
CB Jalen Myrick. The 5-10, 200-pound Myrick has the attention of scouts because of his blazing speed. At the NFL Combine, the speedster from Georgia posted an official 4.28 in the 40-yard dash, which was the second-fastest time at the combine behind Washington?s John Ross who set a combine record with a time of 4.22. Myrick?s burst was the fastest time ever posted by a Big Ten player. And he also is a good return man. Myrick could go in the second or third round and develop into a top cover man who can get physical, too.

NEBRASKA
TE Cethan Carter. He may not have been fully utilized in Lincoln. But the pro scouts like the athletic ability of Carter, who could flex out and play in space as a ?move tight end.? The 6-3, 241-pound Carter will be picked late, maybe the seventh round. He provided an athletic and rangy target in the passing game for NU. Carter battled injuries in his final season with the Huskers, but was once again one of the Big Ten's top tight ends in 2016. Carter finished his Nebraska career with 59 receptions to rank fifth all-time among Nebraska tight ends. Carter also made great strides in his blocking and became a powerful perimeter blocker in his final two seasons.

NORTHWESTERN
LB Anthony Walker Jr. He declared early for the NFL draft after a standout career in Evanston. No doubt, he was the Wildcats? best linebacker since Pat Fitzgerald in the mid-1990s. But unlike his coach at NU, Walker will have a pro career. The 6-1, 238-pound Walker emerged in 2015 with 122 tackles and 20.5 for loss, which ranked fourth in the Big Ten. Walker tallied 105 tackles this past season as the Wildcats went 7-6 and won the Pinstripe Bowl. Walker projects as a third- or fourth-round pick by CBSSports.com and is the No. 9 inside linebacker prospect by FOX Sports.

PURDUE
G Jordan Roos. The 6-4, 302-pound Roos was a three-year starter for the Boilermakers, providing a consistent punch up front. The problem: Purdue needed more players like him, as the program struggled mightily during the tenure of the big, tough Texan. Roos lacks quickness but he is very strong and powerful at the point of attack. Scouts love how he finishes blocks. Still, he?s a longshot to be picked, but he surely will be in a camp as a free agent, at the least.

WISCONSIN
OT Ryan Ramczyk. He declared early and is projected by most pundits to be a first-round pick following an All-American 2016 season. FOX Sports has him going No. 10 overall. And CBSSports.com has Ramczyk as the No. 1 tackle in the draft. He transferred to Wisconsin in 2015 after two seasons at Division III UW-Stevens Point. He initially enrolled at Division II Winona State in 2012 but did not compete. Ramczyk took classes at Mid-State Technical College after leaving Winona State and before enrolling at UW-Stevens Point. Amazing to see where he came from. He anchored an offensive line that helped the Badgers rush for 203.1 yards per game in 2016. The 6-6, 314-pound Ramczyk ranked as last season's top run blocker among FBS tackles by Pro Football Focus and allowed just one sack and eight total pressures in 14 games, per Pro Football Focus.