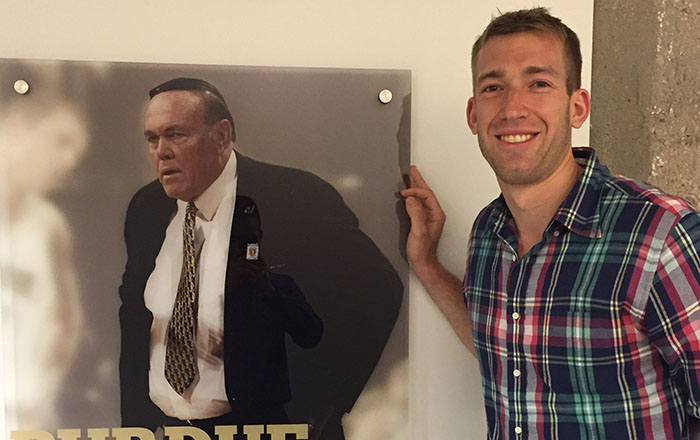 Purdue hasn't had as many NBA talents as it did in 2016-17 since Robbie Hummel, JaJuan Johnson and E'Twaun Moore starred at Mackey Arena.

Vincent Edwards, Isaac Haas and Caleb Swanigan all have declared for the 2017 NBA Draft, without hiring an agent. It remains to be seen how many of them stay in the draft, but BTN.com contacted one of the aforementioned Baby Boilers, all of who played in the NBA, to get a scouting report on the trio.

Here's what Hummel, who is playing for Club Khimki in Russia, had to say about Purdue's NBA draft hopefuls:

Edwards: Vince, you have to love his versatility. You saw it in the NCAA tournament just how talented he is. From a consistency stand point, I think he leaves you wanting more sometimes because of that talent, but then you look at his numbers and he had a really good year on a really good team. I think with him, he has to separate himself probably as a high-level NBA 3-point shooter because in the league there are so many 6'6 to 6'8 athletes that you can get lost in that shuffle.

Haas: For Isaac, it's gonna be his size. You can't teach 7'2, and even by NBA standards, he is a huge body. With that height, he does possess a good amount of skill with both hands around the basket. I think in his case, NBA people are always going to want to know can he guard pick-and-roll and can he score over the length and athleticism of NBA 5's. It's certainly a different animal when Chris Paul is coming at you downhill in pick-and-roll than with any player he saw this season.

Swanigan: I think with Biggie, it's his drive and his motor. He really improved himself as a player and leader from his freshman to sophomore year. It's super impressive to me not only in the numbers he put up on a night-to-night basis but to see just how hard he competes and plays.

While we had Hummel, we also asked him some rapid fire questions.

Funniest Purdue teammate?
Either Chris Reid or Marcus Green. Both were really funny in their own ways.

Did the shorts you all wore during your Purdue career feel as long as they looked?
Ha, looking back now they look ridiculous. At the time, I think we thought we looked cool. I'm not sure how Lewis (Jackson) ever dribbled a ball between his legs. His shorts almost were down to his socks. In fairness to us though, styles change! Our travel suits were velour and we thought those were cool, too.

Former Purdue teammate with the coolest job? Aside from NBA'er E'Twaun?
Most guys are either still playing or are coaching. So, I guess, outside of basketball, I'd have to say Bobby Riddell or Mark Wohlford. (Bobby) Buckets is killing the accounting game, and Mark is a lawyer in Indy.

Better roommate: Matt Painter or Evan Turner?
Hahaha, both are good. Coach Painter doesn't talk nearly the amount of trash to me that ET did.

Most difficult Big Ten opponent you had to guard?
Tough question because there were really a lot of good players in the league for those five years. D.J. White absolutely abused me in a game my freshman year where we had bad foul trouble with JJ (JaJuan Johnson) and Nemanja (Calasan). That was not enjoyable. Evan Turner though was a monster our junior year.

Last show you binge-watched?
Well, over here that's a lifestyle to pass the time. I'm watching Suits now. I'm actually watching a ridiculous amount of shows currently, so it's hard to answer that.

Prettiest city you?ve visited while playing overseas?
It's hard to pick one. Valencia and Barcelona are amazing. Athens has the Ancient Greek history and usually has good weather. Istanbul has kinda developed a bad rep now with the terrorism stuff, but that's a gorgeous city on the sea. I have to give credit here, too, Moscow and St. Petersburg are also both big time in the cities department.

How about some familiar Big Ten names you've faced over there?
Trevor Mbakwe and Aaron White two nights ago. John Shurna, my first year in Spain. JaJuan Johnson last season.

You get to have dinner with three people, dead or alive. Who is at your table?
Michael Jordan, Tiger Woods and Dave Chappelle.

You've done some analyst work for us – any advice for Tony Romo?
Well, I'd say preparation is really such a huge part of just being able to react on live television and then just roll with the punches. One of my first times on with you guys I called Denzel Valentine "Denzel Washington." My first thought was, well, I'm definitely not getting asked to come back on here again. It's live TV, though, and crazy stuff is gonna happen.