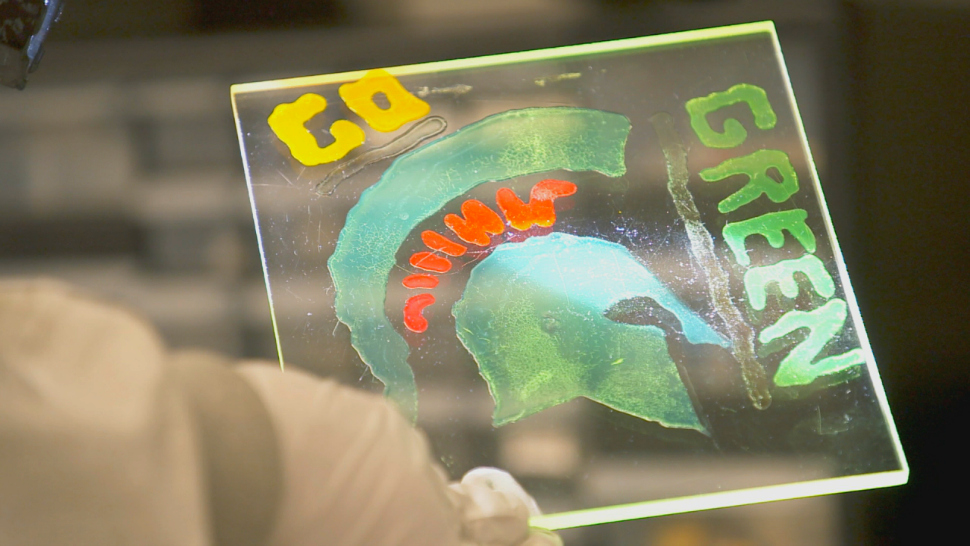 Michigan State University professor Richard Lunt envisions the cities of the future looking, well, pretty much like they do now.

But there is one major difference that he sees coming to the glass-encased skyscrapers that inhabit tomorrow?s metropolises: they?ll be powering the world around them.

That?s because Lunt and his team are working on the next generation of solar panels, and unlike modern black or blue silicon models, Lunt?s solar panels will hardly be noticeable.

Lunt drew inspiration for both aesthetics and practicality from the hindrances of current solar-energy-harvesting technology. While a rooftop array of solar panels might help homeowners keep their energy bill down, it can be an eyesore and even verboten in some municipal housing codes. Solar farms can also mar their surrounding landscape, and are often located far from where the energy they generate is used, greatly reducing efficiency.

Modern cities, however, present a vast opportunity for energy generation with their soaring towers festooned with windows. It?s practically a goldmine of renewable power, says Lunt.

?When you look at tall buildings, there?s often more area in the vertical footprint than in the rooftop,? he notes. ?Integrating transparent solar cells around an entire building can actually help you collect much more energy more efficiently.?

And, buildings don?t present the only opportunity for power generation using this technology. From greenhouses to skylights, automobile windows to smart phone screens, any transparent glass surface can be collecting solar power to either partially or fully replace conventional power sources.

A climate of collaboration at Michigan State that emphasizes whole system engineering has propelled the project from the ground up. Lunt?s team includes not just engineers and materials science specialists, but chemists, physicists and a large contingent of students.

?We have a great team here at MSU, and it really involves students at every level,? says Lunt. ?We have undergrads working on these projects, graduate students, post-docs and even visiting lecturers.?

Recently, Lunt and his team formed a company to help produce scalable, market-ready versions of the transparent solar panels, a transformative step in the future of how we utilize urban centers of the future.

?Solar is going to have a big impact, and we see this new technology as playing an important role in the green engineer?s toolbox to help make the world more renewable. We ultimately see this type of tech being deployed anywhere and everywhere, turning our cities and cityscapes into solar farms.?