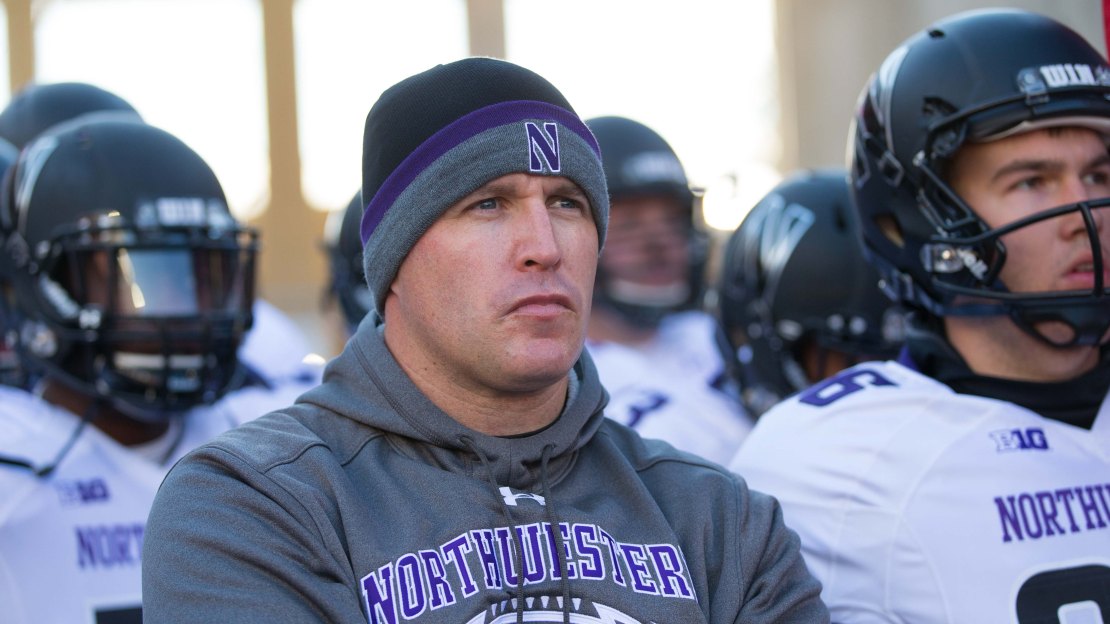 It?s difficult to believe, but Pat Fitzgerald is entering his 12th season as head coach at Northwestern. The all-time great Wildcat linebacker already is the all-time wins leader in Evanston with 77 with two 10-win seasons (2015 and 2012 and a nine-win effort in 2008). Now, the 42-year-old is looking to take NU to the next level: win the Big Ten West. It may happen in 2017.

Fitzgerald (77-62 overall and 41-48 in the Big Ten with seven bowls) has a lot of momentum in Evanston coming off the program?s second bowl win ever. The Wildcats have gone 17-9 overall the last two seasons and 11-6 in the Big Ten with consecutive bowl appearances. Northwestern has the makings for a strong offense in 2017 with quarterback Clayton Thorson, running back Justin Jackson and a veteran line back from last year?s team that went 7-6 overall and 5-4 in the Big Ten.

But a go-to wideout is needed with Big Ten Receiver of the Year Austin Carr gone. The defense also looks strong up front and in the secondary. But can the linebacking unit step up with star Anthony Walker, Jr., gone a year early to the NFL?

I caught up with Fitzgerald as he was putting the wraps on spring football.

Q: Is this as talented a team as you ever have had at Northwestern since taking over for Randy Walker in 2006?
A: Experienced talent, yes. The veterans we have coming back have been through a lot of battles. They have had their ups and downs like we all have. It is a pretty special group of guys.

Q: Who could be the go-to wideout with Big Ten Receiver of the Year Austin Carr gone?
A: Flynn Nagel has had a really good spring. He, Solomon Vault, Bennett Skowronek. Those three guys would probably be the leaders, so to speak. I think (superback) Garrett Dickerson fills a big role, too, based on his experience. We have complete confidence and trust in him as a receiver, too.

Q: Could Clayton Thorson be the best quarterback you have coached at Northwestern?
A: Time will tell, won?t it? He has really worked hard at improving fundamentally, becoming a terrific leader. There is no question in my mind he is poised to take the next step. I think he?s really special.

Q: How can running back Justin Jackson get better? He has rushed for over 1,000 yards in each of his three seasons and has 4,129 career rushing yards.
A: He needs to continue to be a complete back. And that?s when the ball isn?t in his hands. He has been really good in protections, but he needs to continue to get that craft mastered. He also needs to work on routes and catching the ball, and continue to grow as a leader as a senior. He and Clayton need to take the team over. And he?s moving down that road now.

Q: Who will be the middle linebacker with Anthony Walker, Jr., gone?
A: I don?t know yet. It has been a heck of a battle between Nathan Fox and Paddy Fisher. Both of those guys have had really good springs. We will see how the summer unfolds. I think you?ll see both guys play a lot of football. No question.

Q: Can you believe this will be your 12th season at NU? What have you learned?
A: In any leadership role, it?s about surrounding yourself with people who are better than you. And then trusting in their abilities to do their job. From 2006 to now, I?m a totally different leader from that aspect. At the end of the day, I truly think this is all about the student-athlete experience. Not that I didn?t know that as an assistant coach or first-year head coach. But the longer you do this, the more and more it has solidified to me it?s about the young man?s experience. However, we can make it better athletically, socially and academically is what it?s all about. That is what we?re trying to do here.

Q: Could you have envisioned being at NU this long?
A: Well, I had hoped to be here, being at my alma mater. I?d still love to be the linebackers coach. I am just honored and humbled to have the role of head coach.

Q: What is the closest you ever have come to leaving?
A: It?s never even crossed my mind.

Q: How has staff continuity helped you?
A: We are the all-time winningest staff in Northwestern history. We have won a lot of games and are driving to win more. To become a consistent champion, you have to become a consistent winner, first. And I believe we are at that consistent winning threshold now. Now, it?s time to take that next step. Our guys have been loyal to our players. A lot of my staff has had opportunities to be coordinators or head coaches and have decided to stay. They also are terrific teachers and great men, they are great developers of young men. And they are great at recruiting. You look at it holistically. If I only evaluated coaches on the 12 Saturdays in the fall, I guess I probably should have been let go a long time ago, too, if you believe in that stuff. I think it?s about player development holistically. I look at the whole thing. I am thankful for their loyalty. I haven?t lost a full-time coach in seven years. That continuity and consistency helps. And being around these young men each day is special. I am very fortunate.

Q: How is the new indoor facility progressing?
A: The indoor building is moving along. We will be in that no later than June of ?18. The incoming freshmen will be in there for four years. Exciting times in Evanston. Thankful to Morty Schapiro our president, Bill Osborn our chairman of the board of trustees and athletic director Jim Phillips. It?s amazing support. All four of us share a vision. We see where we want to go. And the university is all in. And so are we. It?s exciting to see that type of support.