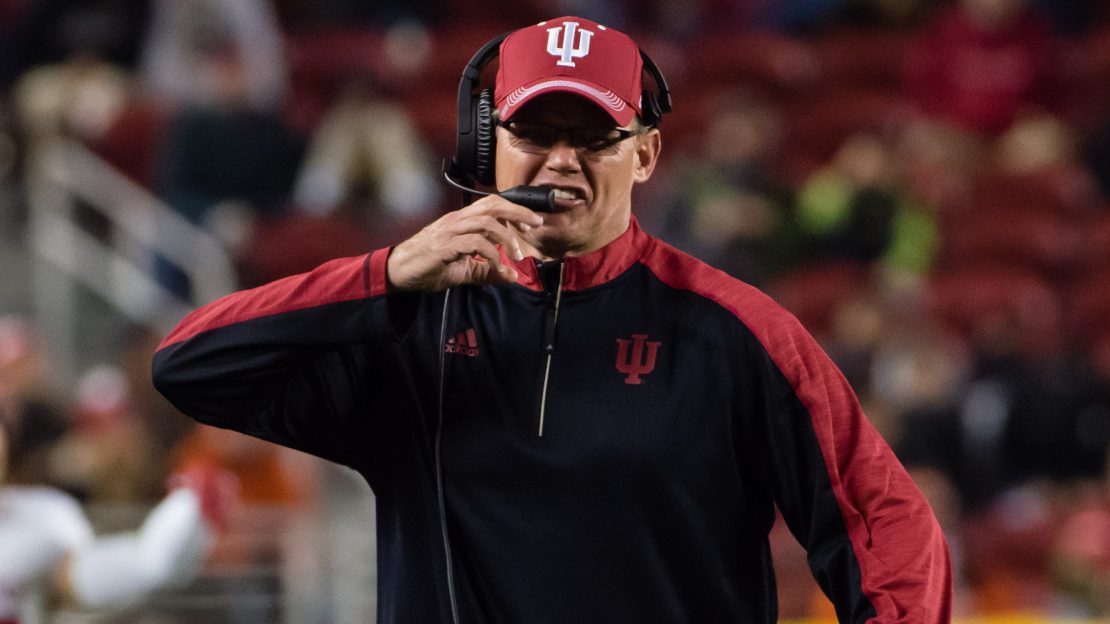 Tom Allen oozes enthusiasm and energy, which is just want Indiana needs as it aims for the program?s first winning season 2007.

Allen has roots in the state, graduating from New Castle High (Steve Alford?s school) in 1988. He also earned a master?s degree from Indiana, while later serving as head coach at Indianapolis high school power Ben Davis from 2004-06. And Allen knows the history of Hoosier football. He also knows you can win in Bloomington.

Allen began making a mark for IU last year, his first as defensive coordinator. He engineered one of the top defensive turnarounds in the country in 2016 in helping the Hoosiers to back-to-back bowls from the first time since 1990-91. Alas, Indiana hasn?t won a bowl since 1991, losing its last four.

Under Allen?s guidance in 2016, IU's defense improved in every major statistical category against a schedule featuring four top-10 opponents, a program first. The Hoosiers held their opponents to 380.1 total yards, an improvement of 129.4 yards over 2015, the largest improvement in the country.

Prior to coming to Indiana, Allen worked on staffs at Arkansas State, South Florida and Ole Miss, among others. But, he never has been a head coach on the collegiate level–until now. I caught up with Allen this week as he was taking his squad through spring drills in advance of the Cream and Crimson game on Thursday, April 13.

Q: What are you encouraged about?
A: We experienced a high level of buy-in by our defense last year and it has flown over to our whole team. It started in bowl game preparations. I am just excited about the mindset of the team and the way they have come to work, the effort. It shows up a lot on special teams in the off-season, when you are drilling special teams in the spring. What?s the motive for that? What type of focus do you get out of your guys? It has been extremely high. It is a great sign for our whole team.

Q: You overhauled your offensive staff. How will the attack look this fall?
A: All five guys are new (coordinator Mike DeBord; passing game coordinator/receivers coach Grant Heard; run game coordinator/line coach Darren Hiller; running backs Mike Hart; quarterbacks Nick Sheridan). It is completely different than it was a year ago. There will be some similarities. I believed in the system we had, the pro-style spread system we were running. It is a really good fit for our players and the kind of guys we can recruit here. We want to be able to run the ball effectively. And our tempo gives us a chance to be successful and the ability to get the ball down the field. I want to continue to be able to do that. I want our guys to protect the ball, No. 1. We didn?t do a good job of that a year ago. I want us to create some explosive plays and also do well in the red zone. Those are areas I think hindered us in the past. We have been emphasizing those areas.

Q: You show a lot of emotion on the sideline. Will that continue now that you are a head coach?
A: I will still be emotional. There will be moments when you are in a different mode. But in regards to how to respond when we make a big play or big stop, I don?t expect a whole lot of difference. That is who I am. You have to coach to your strengths and stay true to who you are. There are times you have to have your head coach hat on, and your DC hat on to celebrate with your guys. And I will be right with them.

Q: Will you still call the defense?
A: Yes, sir.

Q: What are the strongest areas of the team?
A: I would say our group of safeties is probably our deepest group defensively in terms of number of guys who can play. That excites me because we are a multi-safety defense and we utilize that position in a big way. I think our receiving corps can be a special group. We get Simmie (Cobbs) back, which is big. He missed all of last season except for one play. He is getting close to 100 percent. That group could be special. We have the core of both our lines back, too.

Q: Do you still talk to Kevin Wilson, who is now offensive coordinator at Ohio State?
A: I have. We stay in touch. Advice he gives me? We talked when I was hiring coaches. And we have talked as some things have come up individually. He has been here a long time and knows this place. I have a lot of respect for him.

Q: Do you talk with former IU coach Bill Mallory, who went 68-77-3 overall and 39-65-1 in the Big Ten from 1984-1996 with six bowls while leading the Hoosiers?
A: Absolutely. He is someone I called right away (when I got the job). I have known him for many years. I know his sons better. I have gotten a chance to spend some time with him and appreciate him and his wisdom. He is the standard bearer here for longevity, building it and doing it the right way. And he did it the way I think it should be done. I have a ton of respect for him.

Q: Growing up, what are your Indiana football memories?
A: The thing that jumps out to me, I remember when Coach (assistant defensive coordinator/line coach Mark) Hagen was playing (1987-91), it became the expectation for Indiana to be in a bowl and be in contention for winning the Big Ten. They never won the Big Ten in that era, but they were playing the big boys consistently. I remember Anthony Thompson running all over folks (5,299 yards rushing from 1986-89 and Heisman runner-up in 1989). When I think of Indiana football, I think of him. When Coach (Terry) Hep (Hoeppner) came here (in 2005), I was so excited. I was a high school coach then. I thought he was the guy to resurrect the program. Then we lost him (in 2007). But (in 2007), they made a field goal to win (vs. Purdue in the finale) and send Indiana to a bowl (for the first time since 1993). I actually cried when I watched that. I was so excited for the program and Coach Hep?s wife. That was his dream. I want to be able to recreate those things.

Q: Will you start any new traditions?
A: We may change some things with the mechanics of game day and maybe even the sideline we are on. We want the new tradition to be consistent, high level football that has a chance to play deep into the season.

Q: Did you visit anywhere this offseason to glean some information?
A: I visited with LSU. I know (Tiger defensive coordinator) Dave Aranda well. The Central Florida staff, as well. We may do some post-spring ball work with Georgia Southern. You are always trying to find a way to get a new wrinkle here and there and to get better.

Q: Have you met new IU hoops coach Archie Miller yet?
A: I have not met him. I went to his press conference. He has been very busy. We will meet pretty soon.

Q: When you go out to eat in downtown Bloomington, what is your go-to spot?
A: The Malibu Grill. I love it. I go there a lot. They have a place reserved for me. I get the ribeye done medium rare. It melts in your mouth. And you have to get key lime pie for desert.