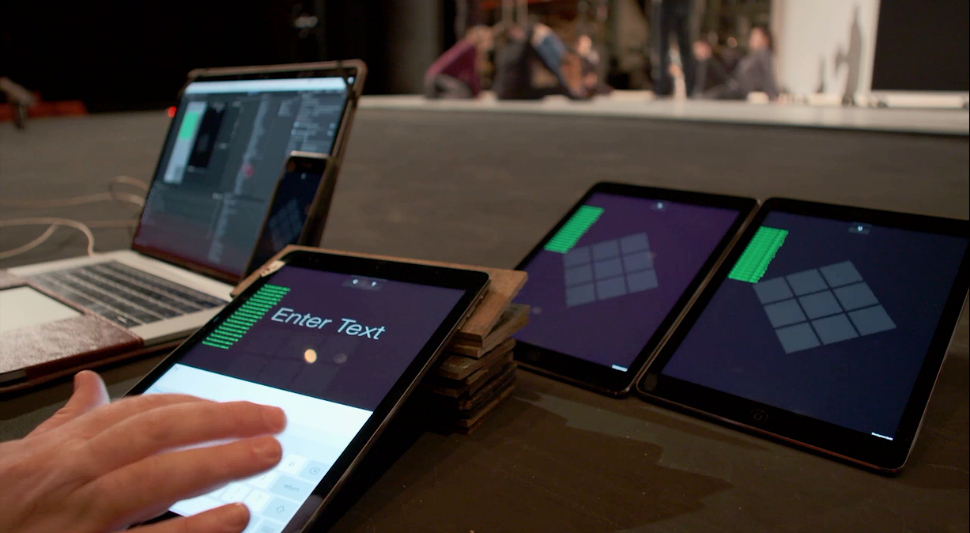 We?ve all been there before. You?re in a theater to see a film, a play or other performance and all of a sudden you see that familiar glow. Or maybe it?s several of those familiar glows. Someone has decided that this is the perfect time to whip out their smartphone to text or check Facebook or Snapchat. It is, in a word, annoying.

For University of Illinois Urbana-Champaign associate professor of dance and music John Toenjes, this modern occurrence has proved to be so much more.

?I went to see Jurassic Park 2,? he explains. ?There were all these giant dinosaurs rushing at you and non-stop action and boom-boom. Nonetheless, there were kids on their phones. I thought, well, theatre obviously has to start incorporating these digital devices or we?re going to lose people.?

Toenjes, who has for years worked as a dance accompanist and composer of music for dance, sees the marriage of the theatrical arts and technology as one of absolute necessity.

?The piano is an amazing technology,? notes Toenjes. ?The clarinet is an incredible technology, lights are technology. So, we?ve, as theatrical artists, always collaborated with technology.?

Now, alongside Chad Michael Hall, a Los Angeles-based metamodern choreographer, he?s created Interface: Critical Mass, a dance performance that allows audience members to participate in the show through a mobile app that connects their personal device with a monolithic cube that dominates the stage.

?What we have is this conversation between the cube and the audience,? says Toenjes. ?The cube actually starts directing the audience to come up on stage, to do different things, to respond to its commands and requests. It, in a sense, becomes this communal coming together of digital technology.?

For Hall, the cube becomes an almost religious artifice. ?It represents a shrine. It represents in a theatrical environment being surrounded by screens, facing towards them all the time. It?s almost an homage to them in a way.?

To realize the vision he had for Interface: Critical Mass, Toenjes worked with his one-time student, Tony Reimer, to develop an app that fully integrated the audience experience into the dance.

Prior to the performance, audience members are asked to download the app, which functions not unlike a multi-player game. From a central server, the show?s designers can synchronize audience devices with the lighting design, provide images to supplement the performance and even invite the audience to vote on certain aspects of the show.

?It allows us to enhance what?s going on onstage and bring that out into the audience,? says Reimer. ?Folks are going to have their phones on at the same time, almost always anyways. So, this is a way to leverage that.?

The technology that Reimer developed for Interface: Critical Mass was so successful in stimulating audience interaction that Toenjes quickly saw the utility in it for directors, choreographers and

producers throughout the theatre world. To facilitate the development and promotion of the app and others like it, Toenjes and Reimer created the Laboratory for Audience Interactive Technologies.

?The app is what I call an empty container for content,? says Toenjes. ?It is very cleverly designed to be reusable and re-purposable for any show. The big vision is that it will be software that any artist can use to explore this new idea of theatre, of being able to contact the audience directly through their cellphones, and make a critical mass of artists who can use modern technology to advance the future of theatre.?