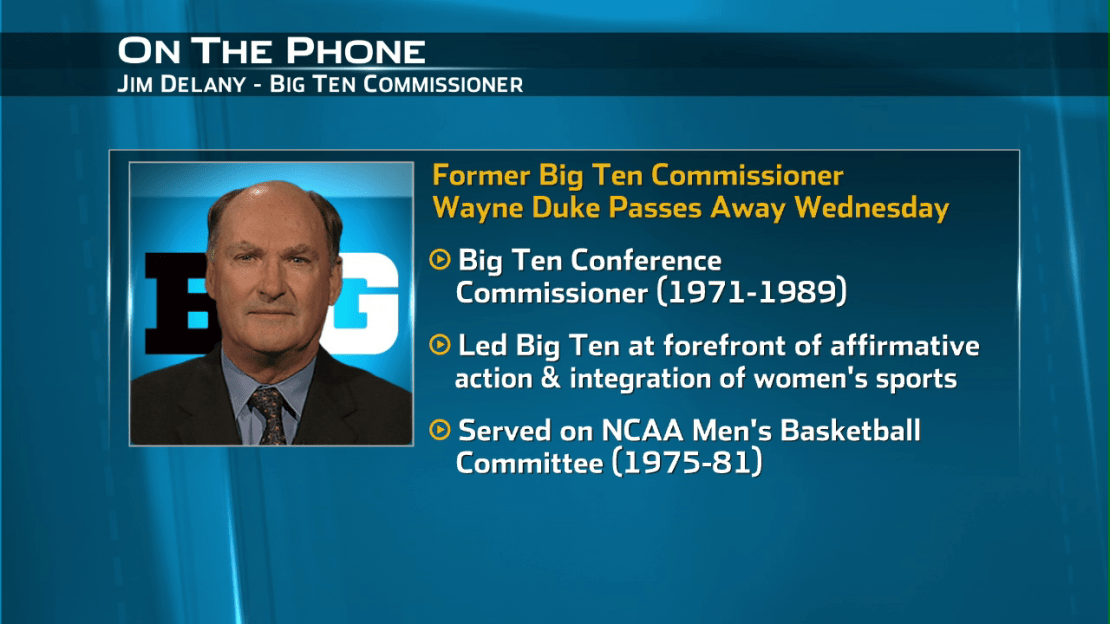 The Big Ten lost one of its most influential individuals with the passing this week of former commissioner Wayne Duke.

Duke, 88, helped shepherd the Big Ten into the modern era during an 18-year run as commissioner, focusing on academic achievement while also helping build the NCAA tourney into its modern incarnation.

In Duke?s 18 years as commissioner of the Big Ten, the conference emerged as the country's best, thanks to bowl and tournament invitations and NCAA championships. Duke had many accomplishments as commissioner from 1971 to 1989.

A big one: He ensured conference strength by forging revenue sharing. No matter how schools performed, each institution shared in the league?s revenue. Duke also led the charge for more bowl games for conference members. When he joined the conference, only the champion received a bid to ?The Granddaddy of them All:? The Rose Bowl. But that policy was changed in 1975, opening postseason opportunities for many schools each season.

Duke also led the charge for more bowl games for conference members. When he joined the conference, only the champion received a bid to ?The Granddaddy of them all,? a.k.a. The Rose Bowl. But that policy was changed in 1975, opening postseason opportunities for many schools each season.

Duke also led a campaign to limit football scholarships to help foster and create greater parity. It's been years since the "have" football schools were able to load up on players at the expense of the "have-nots."

In 1973, Duke was at the center of one of the hottest issues of his tenure. He was ordered to investigate allegations by Michigan's Bo Schembechler that a vote that picked Ohio State to play in the Rose Bowl over the Wolverines was influenced by Duke. Michigan and Ohio State had played to an epic 10?10 tie in the final game of the season and Michigan and Ohio State shared the Big Ten championship.

A vote of Big Ten athletic directors was taken to see who would represent the league in the Rose Bowl. And OSU was chosen. You can watch the whole documentary "Tiebreaker" the chronicled this event.

Duke?s influence went beyond the field. As commissioner, he emphasized "competitive equality through legislative equality." He worked to improve academic standards and graduation rates for student-athletes.

In 2008, the league created the Wayne Duke Postgraduate Award, an annual scholarship. The $2,500 scholarship is awarded to one male and one female Big Ten senior student-athlete pursuing a postgraduate degree for achievements in academics, athletics, civic service, and leadership.

But perhaps Duke's biggest achievement was in 1981-82, when he was a key figure instituting women?s athletics. In that same academic year, Duke made more strides toward gender equality when he hired Phyllis Howlett, the first female assistant commissioner of any conference.

Duke also played a role in the explosion of college basketball, spending much time on the NCAA Division I Men's Basketball Committee. For 25 years he was associated with the tournament in one capacity or another. He once revealed that one of his most difficult decisions was to play the championship game of college basketball in 1981 after Ronald Reagan had been shot.

During Duke's time on the NCAA committee, the tourney expanded from 25 schools to 48, leading the way to 64 and beyond. Also, schools other than conference champions were invited, all games were televised, three-man officiating crews were assigned to every game, television revenues soared, the face of college athletics changed forever and Duke was one of the key players.

Duke began his career in college athletics working in public relations at Northern Iowa and Colorado. In 1952, he joined the NCAA as an assistant to executive director Walter Byers. Duke worked for 11 years at the NCAA.

In 1963, Duke became commissioner of the Big Eight before taking over the Big Ten in 1971. Duke was just 34 at the time, becoming the youngest executive officer of a major athletic conference. The Big Eight enjoyed unparalleled success during his tenure. .

Duke was just the fourth commissioner of the Big Ten when he retired and was 61 when he stepped down in 1989 and was followed by Jim Delany.

A native of Burlington, Iowa, Duke graduated from Iowa in 1950.