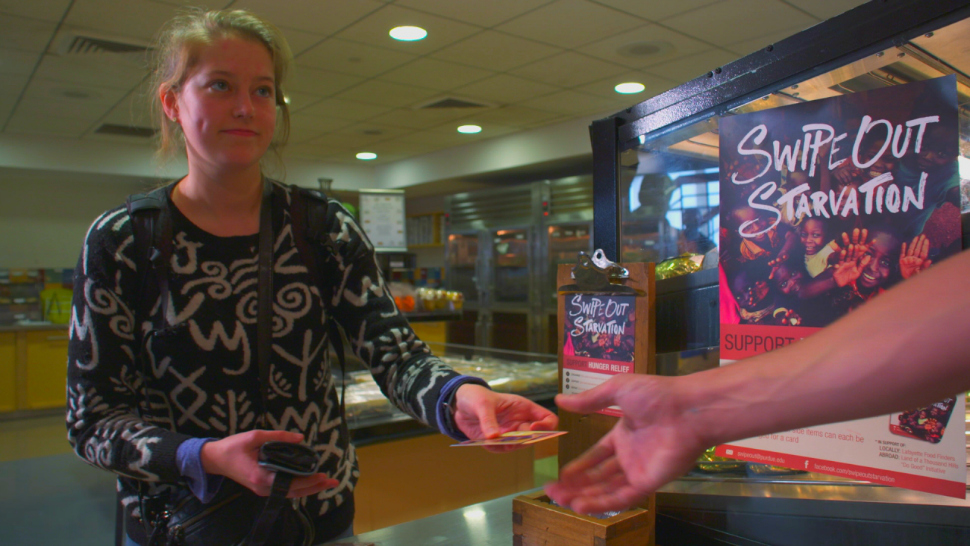 For a group of Purdue University students, the problem was twofold.

First, there was the issue of the meal plan. It wasn?t that Purdue Dining & Catering?s Meal Swipe system didn?t provide enough food. With one ?swipe? equaling an entrée and three side items, students were getting all that they wanted - and then some.

Watching their classmates grab extraneous items just to round out their ?swipe? struck some as needlessly wasteful.

The second problem was one of a more global nature, yet something that still resonates close to home. The ravages of hunger, in its many forms, aren?t limited to the war-torn or famine-stricken corners of the world. They can be felt right in Purdue?s backyard.

?Hunger is a real issue across the globe,? says Drake Krohn, a graduate civil engineering student. ?But it happens here in the United States as well. The reality is hunger comes in a lot of different ways. The Lafayette area does struggle. In the rural areas you see a higher rise in food insecurity.?

Making the connection between the often unwanted meal plan items students were taking and a desire to combat hunger was easy. Forming a plan of action and setting it in motion took some doing.

?Swipe Out Starvation was started in 2010,? says Krohn, who serves as president of the wholly student-run organization. ?Students on campus wanted to make an impact and saw that there was food waste in the dining courts. After a couple of years of negotiating with the university, they finally came up with a plan.?

?Locally, we support Food Finders, a food bank that services Tippecanoe and surrounding counties,? explains Krohn. ?Abroad, we support Land of a Thousand Hills, a sustenance farm in Rwanda where they pay farmers a fair wage for their crops.?

Available in three locations across campus, Swipe Out cards are more than just representative of a donation. The cards also convey statistics and facts about hunger and about how Food Finders and Land of a Thousand Hills are using the money donated by students. They, along with Swipe Out Starvation?s campus-wide educational outreach efforts, help spread the word about the major impact a student?s small donation can make.

To say that word has gotten out would be an understatement. In 2015 alone, Swipe Out Starvation raised over $23,000, sending $10,000 to each of its partner organizations. According to Food Finders CEO Katy Bunder, that money has greatly affected the good they can do.

?That amount of money is equivalent to providing 45,000 meals throughout our sixteen county area,? she says. ?So many students are donating small amounts, but it adds up and makes such a difference to our food bank.?

Krohn adds that the fund sent to Land of a Thousand Hills is also having a tangible impact. The organization is using a portion of the money to build a system that harvests and purifies rain water for the communities it serves.

When thinking of what the future hold for Swipe Out Starvation, Krohn can?t help but reflect on how the organization has grown since its first one weekend pilot program in 2011.

?The growth over the past few years has just been exponential,? he says. ?We?re really grateful for the support from the students and the support from Purdue. To think that it went from one weekend to a couple of weekends throughout the semester, to now every day that the dining courts are open.?

Yet, Krohn and his colleagues still see room for growth.

?We definitely want to expand on our impact in the future, targeting more towards marketing and making people more aware of what it is that we?re doing and partnering with other student organizations that are combating hunger in different ways. We want to further spread our knowledge across campus and make our presence known in a greater form.?