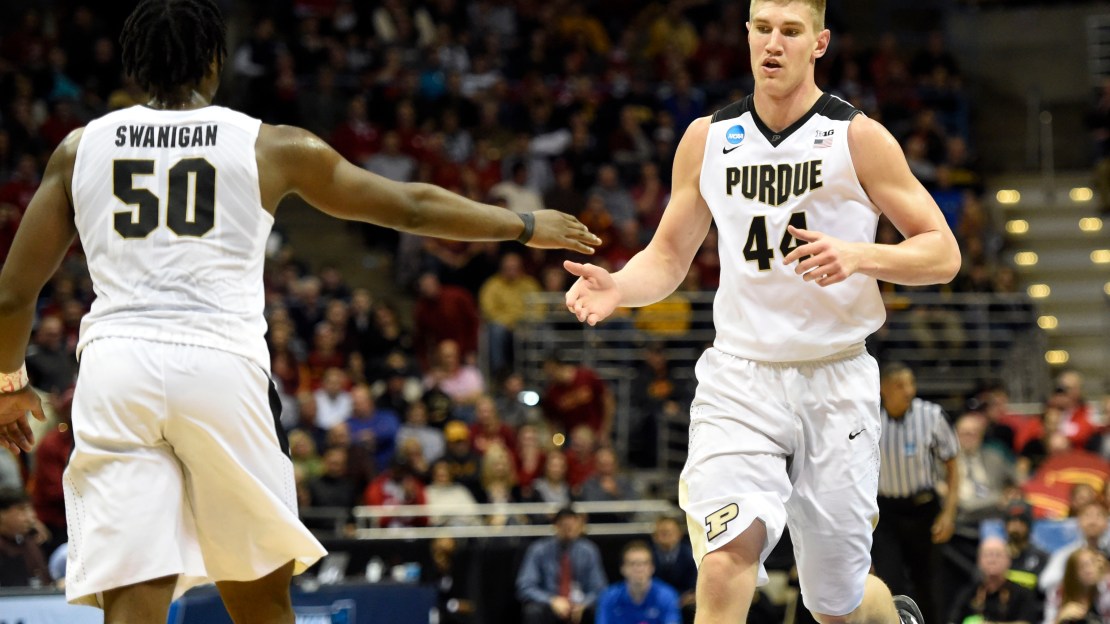 Purdue exorcised some NCAA demons last week in Milwaukee, knocking off Vermont and Iowa State to reach the Sweet 16 for the first time since 2010. That?s a big deal for a program that suffered epic meltdowns in the last two NCAA tourneys, blowing late leads and losing to Cincinnati in 2015 and Arkansas-Little Rock in 2016.

The Boilermakers looked poised for another collapse vs. the Cyclones in a second-round game last Saturday, blowing a 19-point lead. But this time, Purdue rallied and knocked off Iowa State in heart-pounding fashion.

Now, Matt Painter?s squad looks very dangerous as it preps to take on No. 1 Kansas in what essentially will be a home game for the Jayhawks in Kansas City on Thursday. The Big Ten regular-season champs are clicking behind big men Caleb Swanigan and Vincent Edwards. In two NCAA games, Swanigan has 36 points, 26 rebounds, 11 assists and four blocks. He came up with a huge rebound late in the win vs. the Cyclones. And his passing has been impressive. Edwards has been just as good, hitting 19-of-30 shots for 42 points, 15 rebounds and seven assists.

But guard play will be key, too. So, keep an eye on P.J. Thompson, Carsen Edwards and Ryan Cline. Edwards, the talented freshman, is a real X-factor, an explosive talent unlike any on the Purdue roster.

Key player: Vincent Edwards. Yes, sophomore Caleb Swanigan is the unabashed star in West Lafayette and the Big Ten Player of the Year. Purdue knows what it?s gonna get from him each game, and that's a productive double-double. That is comforting. Edwards? He can be a wild card who has disappeared at times. But so far, so good, as the 6-7 junior has played like a superstar. That needs to continue if this program wants to reach the Elite Eight for the first time since 2000 and the Final Four for the first time since 1980.

Key number: 40.4, Purdue?s 3-point shooting percentage, which is No. 1 in the Big Ten. If the Boilers want to upset the mighty Jayhawks, they probably will need to tally over 85 points. That means Purdue will need to be hot from beyond the arc. Dakota Mathias is No. 1 in the Big Ten from 3-point land (45.8). Vincent Edwards, Carsen Edwards, P.J. Thompson, Ryan Cline and even Caleb Swanigan are capable of hitting from downtown.

Know Kansas: The Jayhawks are a No. 1 seed for a reason. This is a mega-talented club led by point man Frank Mason, who is a leading contender for national player of the year honors. The senior is a savvy leader who does a bit of everything. And, he can?t be rattled. No doubt, Mason is a big reason why the Jayhawks are 9-1 in games decided by three points or less. He paces KU with a 20.8 scoring average and 5.2 assists per game. Mason?s sidekick is Devonte? Graham, who can get up and down the wing. It?s all about the guards in March, and KU?s tandem is excellent. Kansas? riches extend to freshman forward sensation Josh Jackson, who averages 16.6 points and 7.1 rebounds. Fellow wing Sviatoslav Mykhailiuk can shoot it, while Landen Lucas is the top rebounder (8.6). The Jayhawks also have some size in 6-10 Landen Lucas. This is a team that can score, notching 100 points in its opening win vs. UC Davis and tallying 90 against a tough Michigan State club on Sunday. If Purdue is going to win, it?s gonna have to be clicking on offense like it was vs. Iowa State. One area of concern for Kansas: depth. If foul trouble hits, that could hamper Bill Self?s team, which is looking for its first national title since beating Memphis in 2008. KU also is looking for its first Final Four since 2012, when Kansas lost the national championship game to Kentucky. These teams met in the 2012 Big Dance, when Purdue blew a 36-30 halftime lead and lost a second-round game 63-60 despite 26 points from Robbie Hummel. KU and Purdue also met in the Sweet 16 in 1994, as the No. 1 seeded Boilermakers took a 83-78 decision behind 44 points by national player of the year Glenn Robinson. The winner of this game will take on the winner of No. 3 Oregon vs. No. 7 Michigan, which beat Purdue twice this season.