Tourney recap: No. 4 Purdue hangs on against No. 5 Iowa State 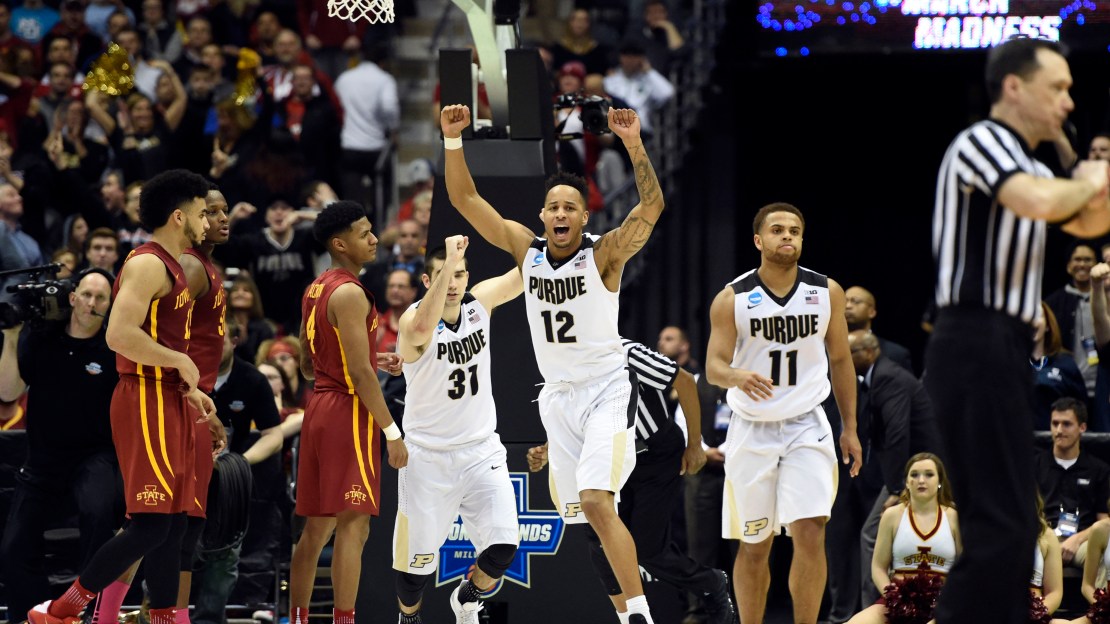 It looked like it was going to be easy for Purdue vs. Iowa State, as they built a 19-point second-half lead. But, the Boilermakers blew it and actually fell behind late in the game.

In the end, they fought and clawed their way back to reach the Sweet 16 for the first time since 2010, taking an 80-76 decision in this second-round game.

It was a tough, resilient effort for a team that had blown late leads in the last two NCAA tourneys and gotten eliminated in opening games. Not this time.

Thank Caleb Swanigan, who played like the National Player of the Year tonight. He was simply dominating in notching his 28th double-double of the season. Matt Painter?s team needed it all against a Cyclone squad that saw Deonte Burton tally a game-high 25 points and Matt Thomas notch 20. Purdue emerged from the regular season as the Big Ten champ, displaying a deadly inside-outside offensive game that is difficult to stop when clicking.

Are foes gonna try to mute big fellas Swanigan and Isaac Haas inside? Or will they try to cover shooters like Dakota Mathias, P.J. Thompson and Ryan Cline? Another option: explosive guard Carsen Edwards. Purdue, which dispatched Vermont in its opening game, is looking good.

Top star: ?Biggie? is the name. He finished with 20 points and 12 rebounds, hitting 8-of-19 shots and 3-of-6 from 3-point land. And he nearly had his first triple-double, as he had a career-high seven assists. Best of all, when the Boilermakers needed one last rebound, Swanigan grabbed it. And hat?s off to junior Vince Edwards, who led the team with 21 points on 9-of-14 shooting with 10 rebounds.

Top stat: 27, assists for Purdue, as the Boilers moved the ball with precision, especially in the first half when they built a 44-31 lead. Purdue also won the battle of the boards, 38-28, and had nine offensive rebounds.

It was over when: When Edwards slammed home two points with 14:24 to play, the Boilers led by 19 points: 58-39. Game over, right? Wrong. The Cyclones came roaring back. With 3:11 left in the game, Iowa State actually grabbed the lead, 73-71, on two Deonte Burton free throws. It was a stunning turn of events and ISU's first–and only–lead of the game. How would Purdue react, especially after it blew a late lead last year and lost in the first round to Little Rock a year after doing the same thing in the opening round vs. Cincinnati?

With gusto, that's how. The Boilermakers fought back and won, outscoring Iowa State, 9-3, after the Cyclones had taken their only lead of the game. Thompson hit two clinching free throws after Swanigan had rebounded the missed front end of a one-and-one free throw by Mathias with 11 seconds hanging on the clock.

What?s next? A likely date with No. 1 Kansas looms, as long as the Jayhawks get by No. 8 seed Michigan State on Sunday. The Boilers swept the Spartans this year. And they have NCAA history with KU, blowing a lead late and losing 63-60 in a second-round game in 2012. Purdue and Glenn Robinson beat the Jayhawks in the 1994 Sweet 16.