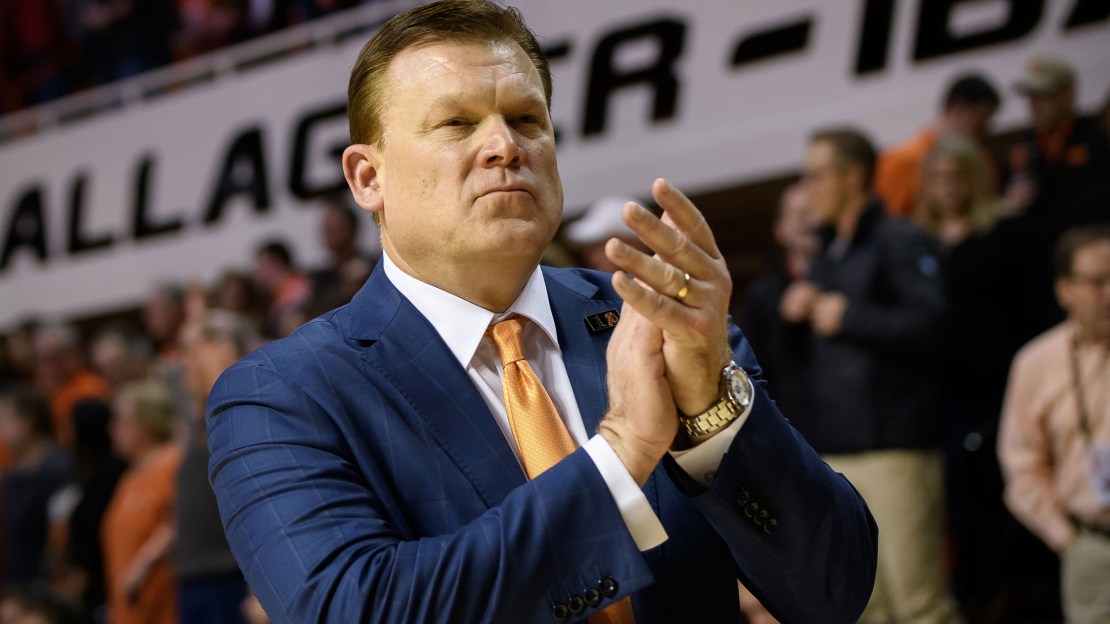 Underwood, 53, offers hope for a program that has missed the last four NCAA tourneys. Illinois hasn?t gone that long without a Big Dance appearance since missing the event from 1964-1980.

"In searching for a new coach, we were looking for a proven winner who would build upon our proud tradition while developing an unmistakable identity for Illinois Basketball," Illinois A.D. Josh Whitman said in a press release. "Brad's teams play a fast, aggressive style and show unyielding toughness. They have a tremendous energy that I believe will ignite the Orange Krush and our fans to once again make State Farm Center one of the most intimidating venues in all of college basketball.

"His winning combination of strong Midwest values and tenacious work ethic are a perfect fit for our community and the Illini Nation."

Underwood coached just one season at Oklahoma State, taking over for fired Travis Ford and going 20-12 overall and 9-9 in the Big 12 in 2016-17 and earning an NCAA bid, where the Cowboys lost a first-round matchup with Michigan. The Pokes played an exciting brand of hoops, ranking eighth in the nation in scoring (85.7 ppg). And the Cowboys ranked eighth nationally in 3-point field-goal percentage (.402) and fourth in the country in offensive rebounding percentage (.383).

Underwood began his career as head coach in 1988 at Dodge City Community College in Kansas. He also has been an assistant at Western Illinois, Kansas State and South Carolina, working under the likes of Bob Huggins and Frank Martin. Underwood became Division I head coach in 2013, when he took over Stephen F. Austin. In three seasons, he went 89-14 overall and 53-1 in the Southland Conference with NCAA berths each season. And Underwood won games in the 2014 (VCU) and 2016 (West Virginia) Big Dances.

Underwood, who played at Kansas State from 1984-86, takes over for John Groce, who in five seasons in Champaign compiled a 95-75 record overall, including 37-53 in Big Ten play with one NCAA bid (2013). Groce probably needed to earn an NCAA bid in his fifth season to keep his job. Alas, that didn?t happen with Illinois needing to make a run in the Big Ten tourney but instead getting knocked out in its first game by Michigan. The Fighting Illini are 19-14, still competing in the NIT under interim coach Jamall Walker. Illinois beat Valparaiso in a first-round game and will take on Boise State on Monday.

"Coaching basketball at the University of Illinois is a once-in-lifetime opportunity," Underwood said in a statement. "The players, fans and administration at Oklahoma State have been absolutely incredible, and I want to thank them for the support they've given me and my family over the last year. However, during my time at Western Illinois, I always saw the Illinois coaching job as one of the truly best in the nation. I want to thank Josh Whitman for the opportunity to join the Fighting Illini family and look forward to working with him to build a championship program. I can't wait to get started with our team. Next season can't get here fast enough for me!"

Underwood inherits a solid program. The basketball venue has undergone a recent renovation. And Illinois traditionally is known as a basketball school, making the Final Four as recently as 2005. Plus, the recruiting base is solid, too.

The roster will take some big hits, however. The best player, Malcolm Hill, is gone along with guard Tracy Abrams and big man Maverick Morgan. But talent is back in the form of forwards Michael Finke, Leron Black, Kipper Nichols and exciting freshman point man Te?Jon Lucas along with guard Jalen Coleman-Lands.

And Illinois has the makings of one of the top recruiting classes in the Big Ten led by 6-10 Jeremiah Tilmon, a five-star recruit. The class also includes four-stars in guards Trent Frazier and Da?Monte Williams, along with three-star guard Javon Pickett. Can Underwood hold that class together?