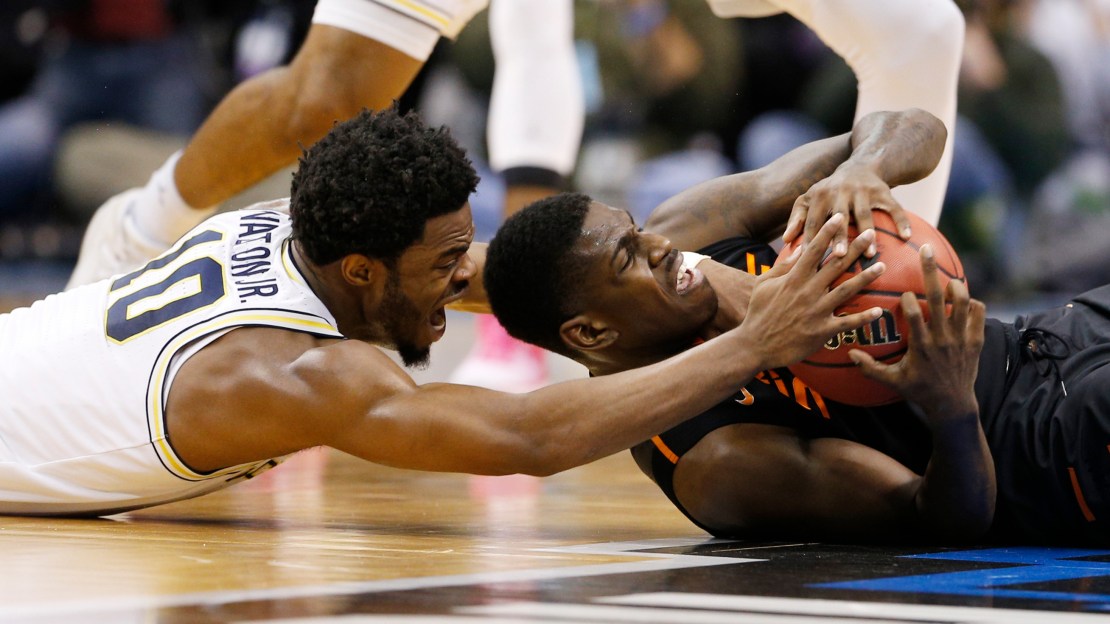 Michigan and Oklahoma State went up and down the court in Indianapolis, exchanging punches. It was basketball gold. Too bad only one team could prevail. And that team was Michigan, 92-91.

Few teams in the nation were hotter than Michigan when the NCAA tourney began, as the Wolverines won 10 of their last 12 games. Now, it's 11 of 13. And the program?s run to the Big Ten tourney title was one for the ages, as Michigan had to overcome a plane crash and then win four games in four days as a No. 8 seed to march to the improbable championship in Washington, D.C. That mojo continued in the Wolverines? first NCAA game, as No. 7 Michigan took down No. 10 Oklahoma State in one of the best games yet in the Big Dance.

Top star: Derrick Walton, Jr., has been as good as any player in the Big Ten the last half of the season, but he wasn?t even first-team All-Big Ten. Regardless, Walton is playing like an All-American coming off an MVP effort in the Big Ten tourney. The senior continued to shine today vs. Oklahoma State, scoring a game-high 26 points on 7-of-13 shooting and hitting 6-of-9 from 3-point range. Oh, and he had five rebounds, two steals and 11 assists. And he even hit two free throws with 10 seconds to go to give Michigan a four-point lead. Walton won a fierce battle of star point guards with the Pokes? Jawun Evans, who had 23 points.

Top stat: 55.2, Michigan?s 3-point field-goal percentage, as the Wolverines connected on 16-of-29 from long range. Derrick Walton hit 6-of-9 and Zak Irvin connected on 4-of-6 to lead the way.

It was over when: From an entertainment standpoint, this game was off the charts. There were myriad lead changes and ebbs and flows between two offensively talented teams. The Wolverines led, 41-40, at halftime. Neither team could build a sizable lead or gain firm control of this seesaw affair. A Jawun Evans layup with 4:17 to go cut Michigan?s lead to 79-77. And with Michigan?s Duncan Robinson bricking free throws late, Okie State made it a two-point game again, 88-86, with 10 seconds remaining. Time to sweat. But Derrick Walton and D.J. Wilson both hit two freebies to ice it. Clutch.

What?s next? The Wolverines will take on the winner of No. 2 Louisville vs. No. 15 Jacksonville State. A clash with Rick Pitino's Cardinals could be epic.