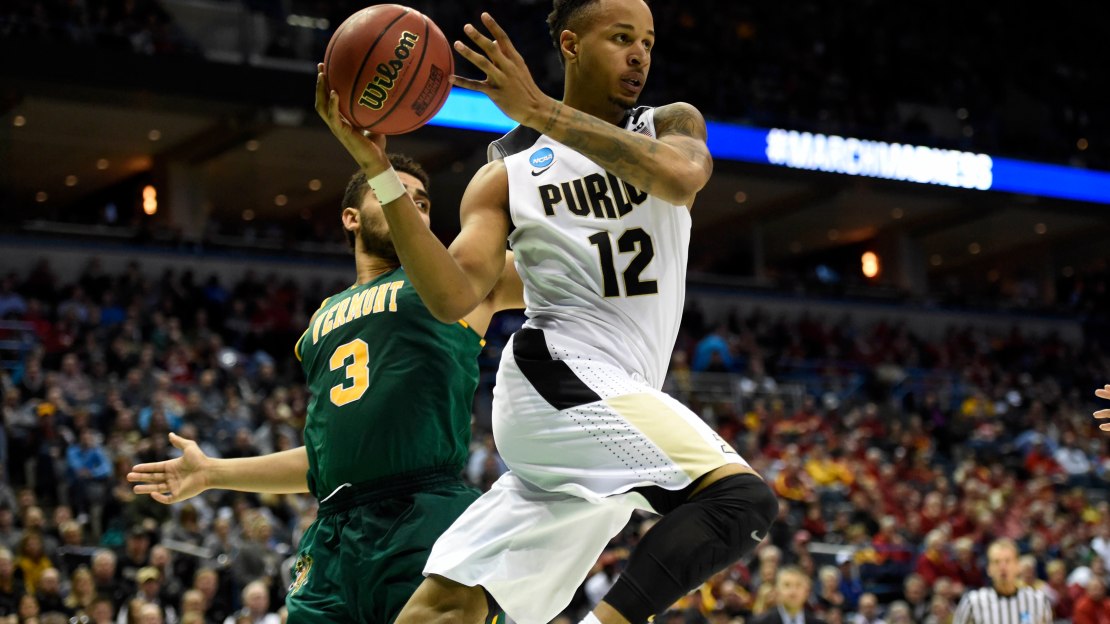 It wasn?t pretty, but Purdue doesn?t care. It was a win. And the Boilermakers desperately needed one after blowing late leads in each of the last two NCAA tourneys and losing in painful fashion to Cincinnati in 2015 and Arkansas-Little Rock in 2016.

This time, Purdue didn?t fade down the stretch, taking down Vermont 80-70 and notching its first Big Dance victory since 2012 (full box score here). The monkey is off the back, as the Catamounts had their NCAA-best 21-game winning streak snapped. This program needed this. Now-who knows?-maybe the Boilermakers can make a run.

This team has impeccable inside-outside balance with an array of 3-point shooters led by Dakota Mathias and the ultimate inside force in Caleb Swanigan, who had his 27th double-double which is the most by any major conference player in a season in five years.

The Big Ten regular-season champs will be a difficult out if they limit turnovers, crash the glass and shoot well.

Top star: Vince Edwards has been inconsistent most of the season. When he is dialed in, Edwards is a force. But he is won't to disappear, too. Would he excel today? Yep, as the junior had a team-high 21 points on 10-of-16 shooting with five rebounds. Edwards was one of five Purdue players in double-figures and really took over in the second half. And hat?s also off to Caleb Swanigan. He had 16 points as well as 14 boards and three blocks.

Top stat: 51.7, Purdue?s shooting percentage, as the Boilers hit 31-of-60 shots. Vermont hit 44.3 percent of its shots. That hot shooting allowed Purdue to overcome 10 turnovers, eight in the first half. The Boilers shot 55.2 percent in the second half.

It was over when …: It was nip-and-tuck most of the game, as the Boilers hit a late shot to take a 37-36 halftime lead. Vermont cut Purdue?s edge to 51-50 with 12:24 to go. But that is as close as the Catamounts would get, as the Boilermakers slowly but surely eased out and took control.

What?s next? Purdue will take on the winner of No. 5 Iowa State vs. No. 12 Nevada in the second round on Saturday. Win that, and the Boilermakers will get to the Sweet 16 for the first time since 2010-and likely have a showdown with No. 1 Kansas.