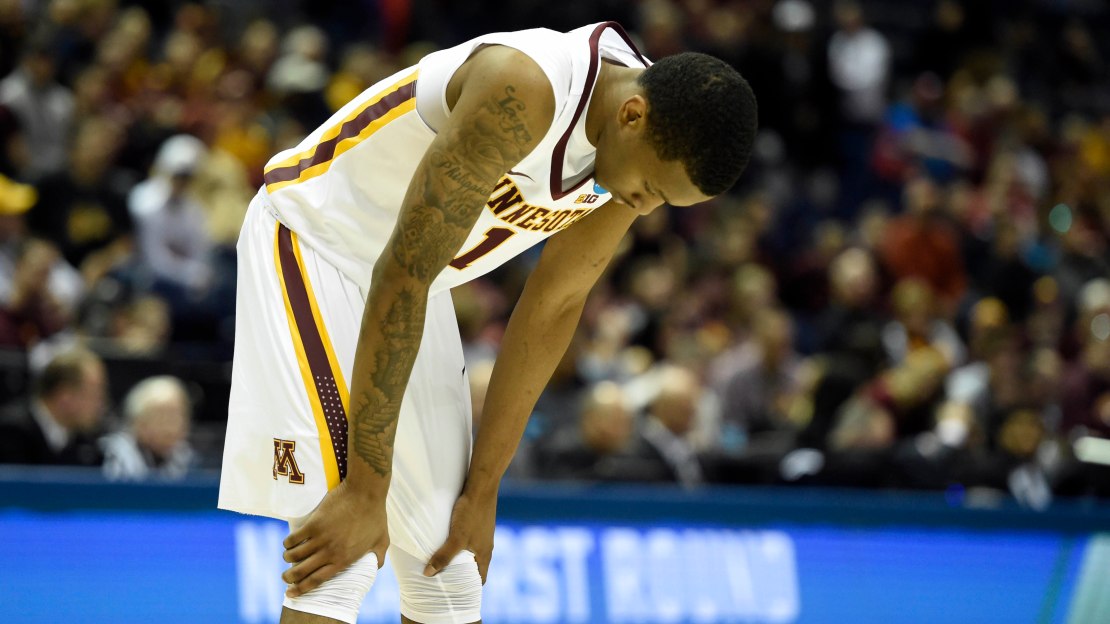 A No. 12 seed has victimized a No. 5 seed-again. This time, it was Minnesota that played the victim, losing to Middle Tennessee State (full box score). It?s the second year in a row MTSU has taken out a Big Ten school, as the No. 15 Blue Raiders toppled No. 2 Michigan State last season. And it's the ninth time in 10 years a No. 12 seed has dumped a No. 5.

Many experts predicted this outcome, as Middle Tennessee was one of just six teams in the nation to win at least 30 games this season. In fact, MTSU may be the most deadly double-digit seed in the tourney. So, this outcome isn?t a total shock, especially when you factor in the hex that No. 12 seeds have had over No. 5 seeds in recent years, coupled with Minnesota's struggles down the stretch.

The Blue Raiders led by six at the half and built a 17-point lead in final 20 minutes. This is a disappointing end for Minnesota, which was the most improved team in the nation this year by going from 8-23 to 24-10. The Golden Gophers had a late-season eight-game winning streak but ended up losing three of their last four games.

Still, the future is bright for Richard Pitino?s program.

Top star: Middle Tennessee State?s Reggie Upshaw had 19 points and nine boards. Best of all, Upshaw stepped up and played big down the stretch after Minnesota had trimmed MTSU?s lead to four points. Upshaw was one of four Middle Tennessee players in double-figures. Amir Coffey led the way for the Golden Gophers with a team-high 17 points to go with four assists and three rebounds.

Top stat: 37, rebounds for Middle Tennessee State compared to only 24 for the Gophers. Another key was MTSU?s bench outscoring Minnesota?s, 22-11. This was a Gopher team that lacked depth, especially after Akeem Springs went out with a season-ending injury last week in the Big Ten tourney.

It was over when … : MTSU led by 17 points, 59-42, on a Brandon Walters layup with 11:58 to go. But that?s when Minnesota went on a 16-3 run, cutting Middle Tennessee?s 17-point lead to four, 62-58, on an and-one by Eric Curry. Then, like the star he is, Reggie Upshaw stepped up in crunch time and scored seven points in a row for the Blue Raiders to help give them a 69-61 edge. With the Middle Tennessee State lead 74-65, Richard Pitino called timeout with 1:27 left ? then got a technical foul after beefing with an official. That officially ended any hope for Minnesota.

What?s next for Minnesota: The future looks bright, as the only senior on the squad was Akeem Springs. Pitino will build around the likes of Dupree McBrayer, Nate Mason, Jordan Murphy, Amir Coffey, Reggie Lynch and Eric Curry next season. Expect the Golden Gophers to make a run at the Big Ten title in 2017-18.