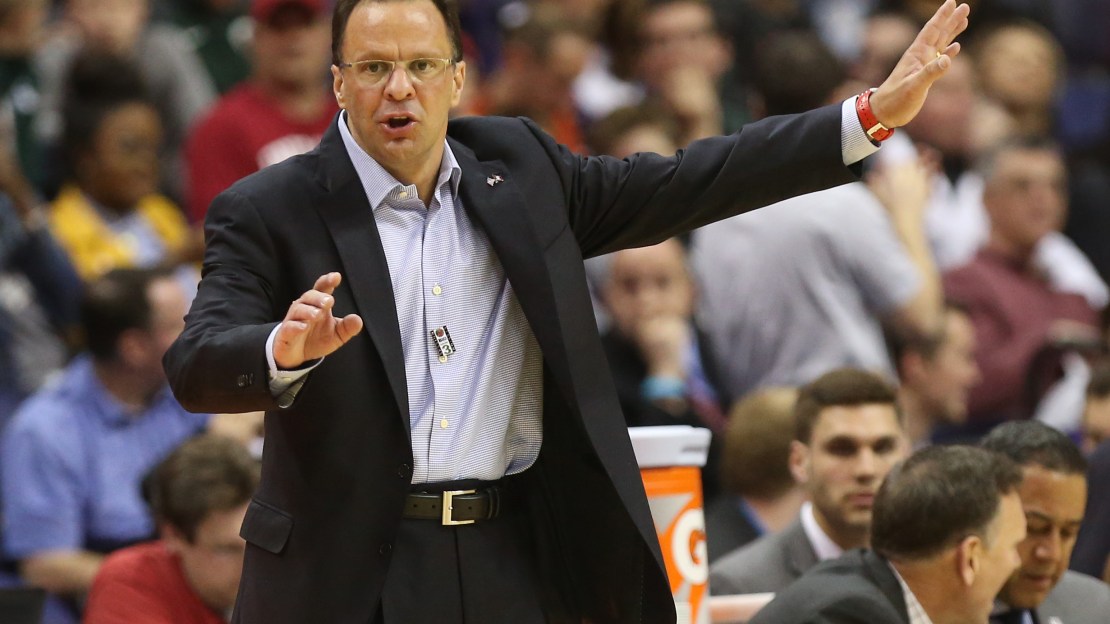 The speculation had grown from a din to a roar as the losses and disappoint mounted for Tom Crean and Indiana this season. Would he be retained? That answer came today, as the Hoosier hoops coach was let go.

?Tom Crean brought us through one of the most challenging periods in IU basketball history, led his players to many successes in the classroom and on the court and represented our university with integrity,? A.D. Fred Glass said in a statement.

?However, ultimately, we seek more consistent, high levels of success, and we will not shy away from our expectations.?

We will learn more in the 3 p.m. ET press conference at Indiana, which will air live on  BTN & BTN2Go.

Crean, who turns 51 in March, arrived in Bloomington amid much hype and fanfare from Marquette in 2008. He was a rising star, having led the Golden Eagles for nine seasons and going 190-96 overall with five NCAA trips. The highlight was a trip to the Final Four in 2003. Crean also was known as the man who coached Dwyane Wade, who has become one of the NBA?s biggest stars.

Coming off a second Big Ten championship in 2016 and third Sweet 16 entering this season, Crean and Indiana had great expectations. And things got off to a promising start, as the Hoosiers knocked off Kansas and North Carolina in the non-conference and ascended as high as No. 3 in the polls. Alas, it was downhill from there, as the program struggled and went 18-16 overall and finished 10th in the Big Ten with a 7-11 mark. The season ended with a resounding thud in the NIT, as the Hoosiers lost their opening game at Georgia Tech. The Indiana brass had seen enough.

The rumor mill already is abuzz as to whom Indiana will target to fill one of the most prestigious and pressure-filled jobs in America, a job that ranks right up there with being head coach of the Dallas Cowboys, Los Angeles Lakers, Notre Dame football and being manager of the New York Yankees.

The name at the top of most Indiana fans wish list: former Butler coach and current Celtics coach Brad Stevens, who led Butler NCAA runner-up finishes in 2010 and 2011. But that?s not likely to happen. Other possible targets are Wichita State?s Gregg Marshall, Dayton?s Archie Miller, Oklahoma Thunders? Billy Donovan and Virginia?s Tony Bennett, among others, as Indiana joins Big Ten brother Illinois in the search for a head coach.

When Crean arrived at Indiana, the place was a mess in the wake of the disastrous Kelvin Sampson era. The goal was to rebuild this illustrious program and bring back a championship hue. It was a slow process, as Crean didn?t post a winning record or NCAA bid until this fourth season on campus.

That year, Crean delivered the first of three Sweet 16 bids. The next year, Crean won his first of two Big Ten titles. But he never was able to launch Indiana back into the elite stratosphere with fellow basketball bluebloods like Kentucky, North Carolina, Duke and Kansas. Crean will leave with a 166-135 record overall with a 71-91 Big Ten mark.

"Tom Crean brought us through one of the most challenging periods in IU basketball history, led his players to many successes in the classroom and on the court and represented our university with class and integrity,? Glass said in Thursday's statement. ?While winning two outright Big Ten titles in five years and being named Big Ten Coach of the Year, Tom worked tirelessly to develop great young men and successful teams. However, ultimately, we seek more consistent, high levels of success, and we will not shy away from our expectations. Tom is a good man and a good coach and we owe him a great debt of gratitude for his many positive contributions to Indiana basketball. We wish him well.

"The national search for our new coach begins immediately. The Board of Trustees and the President have expressly delegated to me the responsibility and authority for this search and hire. While I will not be establishing a formal search committee or advisory committee, I will consult with basketball experts from around the country and throughout the State of Indiana, including many former Indiana University basketball players.

"The expectations for Indiana University basketball are to perennially contend for and win multiple Big Ten championships, regularly go deep in the NCAA tournament, and win our next national championship-and more after that. We will identify and recruit a coach who will meet these expectations."