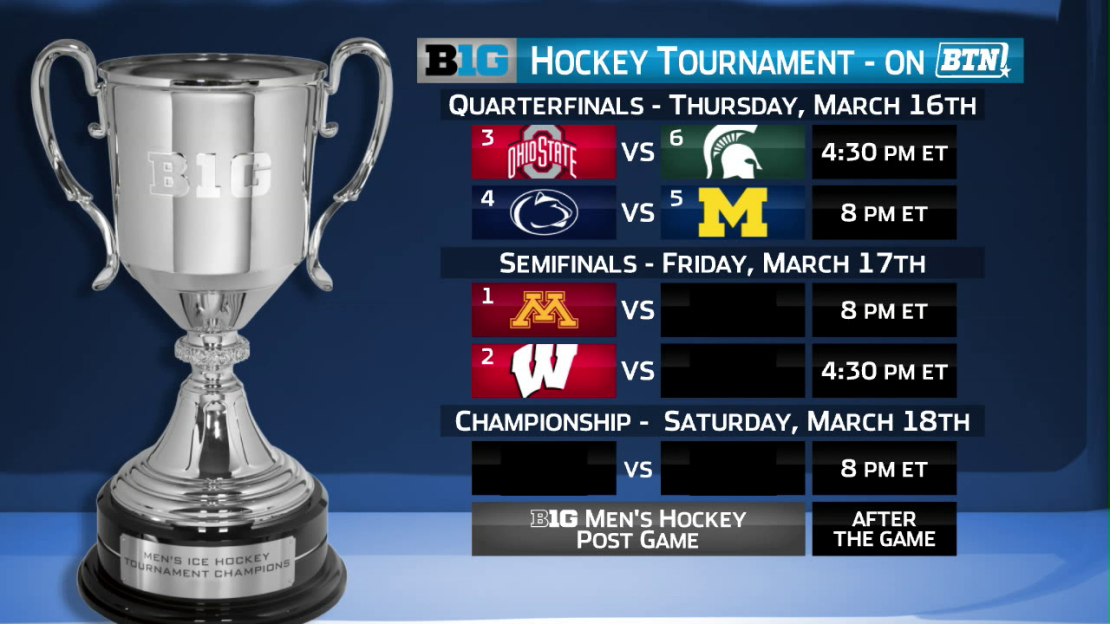 The 2017 Big Ten Tournament will be played Thursday through Saturday, March 16-18, at Joe Louis Arena in Detroit, Mich.

All five games will be broadcast live by BTN and BTN2Go. For real-time updates, follow your school team's Twitter handle here.

Here's a link to the BigTen.org page (all times ET)

Minnesota, which won its lone Big Ten Tournament title the last time the event was held at Joe Louis Arena in 2015, led the conference with 43 points this season and a conference record of 14-5-1-0. Wisconsin enters the tournament as the No. 2 seed, earning a first-round bye along with Minnesota. The Badgers claimed their highest seed in the Big Ten Tournament since winning the inaugural event in 2014 after finishing this season with 36 points and a 12-8-0-0 record in conference play.

The tournament will open at 4:30 p.m. ET on Thursday, as third-seeded Ohio State challenges sixth-seeded Michigan State. Thursday?s second game is set for 8 p.m. as fourth-seeded Penn State takes on fifth-seeded Michigan. The Buckeyes finished third in the conference standings with 35 points and a record of 11-8-1-1. The Nittany Lions placed fourth with 31 points (10-9-1-0), while the defending tournament champion Wolverines claimed fifth place with 22 points (6-12-2-2). The Spartans finished sixth with 13 points and a record of 3-14-3-1.

The Big Ten Tournament championship game will take place at 8 p.m. on Saturday.