Don't let them get hot: Michigan is shooting its way through March 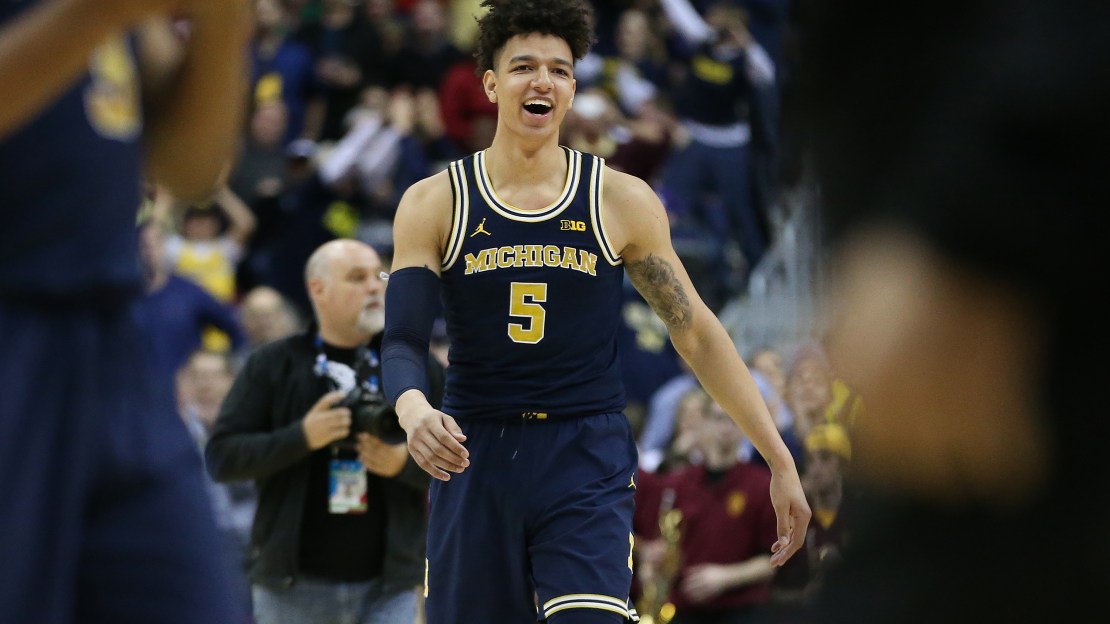 WASHINGTON — Michigan is the story of the 2017 Big Ten Tournament, and rightfully so.

The Wolverines? plane accident Wednesday has dominated headlines and has seemed to serve as motivation during their march to Sunday?s tournament final. But don?t let that uplifting story overshadow their formula for success:

They?ll shoot you out of the gym.

The Wolverines make up for their lack of impact big men with perimeter athletes who can burn you from deep and hit the hole when you?re forced to close out. They?ll overwhelm you with outside options, from Moe Wagner to Duncan Robinson to D.J. Wilson to Derrick Walton Jr. and others. They all can let it fly, and Michigan isn?t shy about trying to bury opponents early.

They did it in conference play against Indiana, Michigan State and Nebraska, when the Wolverines shot over 60 percent from the field and over 48 percent from three in those 30-point drubbings. They did it in the first round of the Big Ten Tournament Thursday, when they jumped out to an early double-digit lead over Illinois when they were barely off the plane from Ann Arbor.

And they did it again Saturday in the Big Ten tourney semis, unleashing an avalanche of points on the Gophers as they shot 72 percent in the first 12 minutes and 63 percent in a 47-point first half. No. 4 seed Minnesota spent all its energy trying to come back and it wasn?t enough, as the Wolverines held them off for a 84-77 win.

?With all the pieces we have, I don?t think everyone can have an off-night at once,? Wilson said after an uncharacteristically quiet seven points and two rebounds Saturday. ?And it goes to show today.?

It?s simple. The more good shooters you have, the more likely you?ll get ?hot? as a team. Sure, there are times when the formula fails. But very rarely do all the Wolverines all have an off-night like they did Nov. 23 in a 61-46 loss to South Carolina, when the team shot 19 percent from the field and a dreadful seven percent from deep. Lately, it?s been just the opposite, as most of the Wolverines have shot well enough to sustain a shooting clip that is torrid enough to beat anybody in the country.

Over their last six games they?ve shot an average of 52 percent from the field, a mark they only reached once in their 11 losses this season. They?re also shooting an average of 50 percent in their first three postseason contests. UCLA leads the nation with a 51.9 field goal percentage all season, so Michigan is currently playing at a level with the elites.

Teams have figured out what analytics will tell you: hoisting high volumes of 3-pointers can be a very efficient way to play basketball, if you have the personnel. Michigan attempted 814 threes during the regular season, which was 77 more than the second-closest team in the conference. They were second in field goal percentage (47.9) and 3-point percentage (38.1). Nearly all of their players have the ability to splash them, but it helps to have the green light granted to them by their coach.

?Neon green, as (Coach John Beilein) calls it,? shooter Duncan Robinson said Saturday. ?Whenever I can get one up, he encourages it.?

As Big Ten Tournament teams are seeing first hand in D.C., Michigan?s recipe is a scary proposition for opponents. It?s tough to guard three snipers on the perimeter, and the Wolverines have six guys who shoot at least 37 percent from deep. Sure, they give up some extra buckets on the defensive end using this strategy, but it doesn?t hurt them nearly as much when they?re giving up twos but getting threes in exchange.

Maybe Michigan goes cold Sunday in the Big Ten Tournament final, or maybe it happens in the NCAA tournament. Regardless, everyone will still be talking about the impressive resiliency of a group that overcame a scary situation. But just below the surface of the feel-good narrative will be the refrain that opposing coaches will be thinking as they watch Selection Sunday and as long as the Wolverines are alive in the NCAA tournament:

"Hopefully Michigan doesn?t get hot, because if they do, we?ve got no chance."