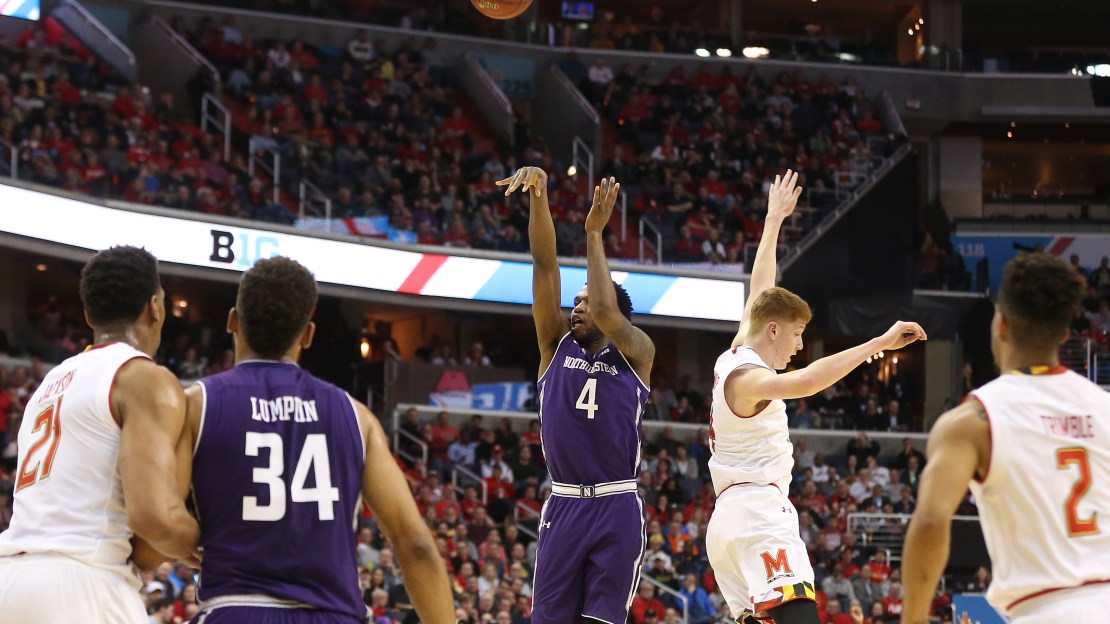 WASHINGTON — The Big Ten Tournament got underway Wednesday, and nine games were played at Washington, D.C.?s Verizon Center before the closest team to town got to take the floor Friday evening.

By the time the No. 3-seeded Maryland Terrapins rolled in from their campus nine miles down the road in College Park, the hometown fans were more than ready. They were electrified.

Other Big Ten teams have brought impressive contingents to the nation?s capital, but let?s be honest: The first two days were the soft opening of the Big Ten Tournament, and Friday night was the feature presentation. Maryland fans brought their families, their signs and their iconic Maryland State Flags.

And their jerseys. So many jerseys. Replicas of Len Bias and Greivis Vazquez and Melo Trimble dotted nearly every corner of the arena.

Just like a simmering volcano, the crowd let out minor earthquakes before finally erupting. When the thousands of people who got there early caught a glimpse of some Terps players as they emerged from the tunnel to watch the end of the Indiana-Wisconsin game, the cheer rivaled what you?d expect if Alexander Ovechkin had just found the back of the net in this building. The noise reverberated all the way up to the 400 level, where a few hundred members of Maryland?s ?The Pride? student section chanted like it was a home game, all game. Young, rowdy alumni made up a significant segment of the audience.

When the Terps actually took the floor for the first time, it was deafening:

The Terps come out to a huge roar for their first BTT game in Washington: pic.twitter.com/RiObJUzEpU

Caught in the crosshairs of this crowd oozing excitement was the No. 6 seeded Northwestern Wildcats, who was an amusing role reversal for the yearlong darlings of the conference. The Maryland fans didn?t share the fuzzy feel-good story of the Wildcats? impending debut in the NCAA tournament, at least for one evening.

The ?Cats came out to a chorus of boos, and even their fans and band members on the video board weren?t spared. They responded by threatening to play spoiler to Maryland?s Big Ten homecoming party. When Bryant McIntosh helped push Northwestern out to a 28-18 lead, the crowd leaked nervous tension. But the Terps talent eventually caught up with their fans? energy, clawing them back into a one-possession tug of war.

The game certainly lived up to the hype of the main event in town. It was a Friday night prize fight, with stars like Melo Trimble and Scottie Lindsey taking their turns to shine.

Fun moments unfolded off the court, too. Former ?Seinfeld? and current ?Veep? star Julia Louis-Dreyfus has been a regular at Northwestern games this season to watch her son play as a walk-on, and when she was shown on the video board, she was mercilessly booed. The camera operator then immediately switched to SportsCenter anchor and Maryland alum Scott Van Pelt, who reveled in the standing ovation.

But for the majority of the fans in the stands, most of their fun gets derived from the final outcome on the court. And except for the pockets of purple in the house Friday, most of the fans left Verizon Center disappointed. Northwestern is a good basketball team, and it proved it in a hostile environment by having a counter-punch for every Maryland swing.

By the time Dererk Pardon?s layup pushed the Wildcats? lead to 64-54 with 2:55 remaining, much of the Terrapin fans? angst had turned into a collective sigh. On the other hand, Northwestern had earned every right to celebrate.

It was hard to imagine any outcome besides 13,000+ Terrapins fans spilling out of Verizon Center and into Saturday?s semifinals wearing smiles. But the Wildcats have altered the narrative all season, and their story?s Friday ending included Maryland fans heading in defeat for the exits in droves with two minutes remaining.