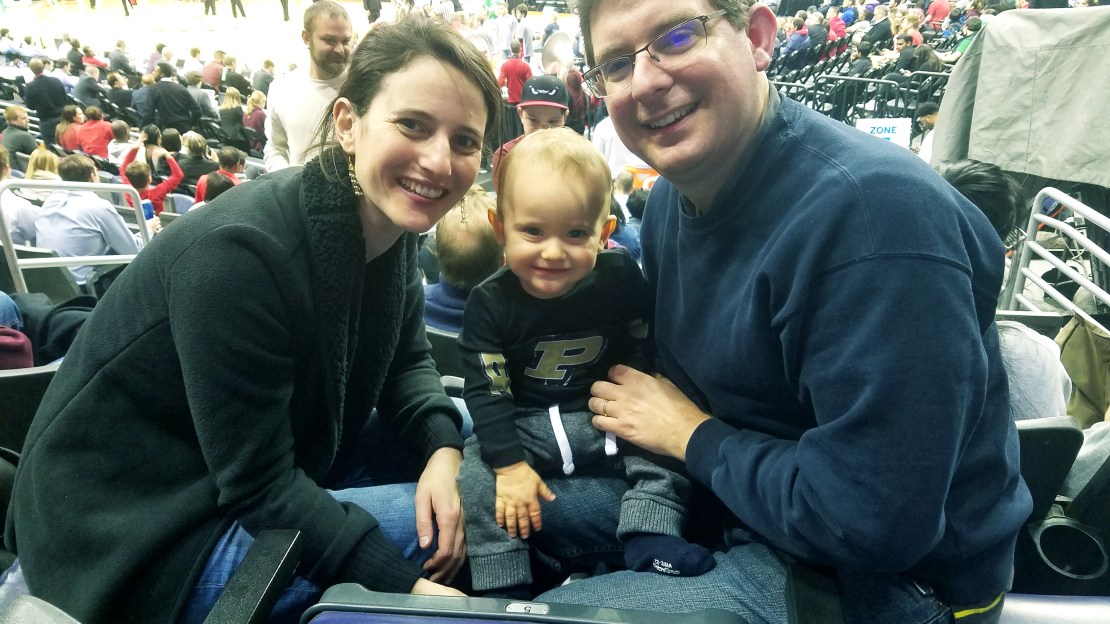 WASHINGTON — It?s been a season to remember for Purdue, as the Boilermakers sealed their first outright Big Ten hoops title in 21 years last week. Their success has apparently rubbed off on even the newest of fans.

Theodore Daul still has about 18 years before he goes to college, but he was already able to boost Boiler pride with a win in Wednesday night?s baby race during the Ohio State-Rutgers game at Verizon Center. Check out this blazing speed at the top of this post.

I caught up with Theodore and his parents, Tim and Claire, after the race to trace the source of little Theo?s athletic prowess.

BTN.com: Congratulations, first of all. Where are you from, and what brings you to the Big Ten Tournament?
C: We?re British. Theo was born in Switzerland, and then we moved to the States when Theo was three months old.
T: From what I know-because I work for Caterpillar-we employ a lot of engineers from Purdue. And Illinois was taken. So we went for Purdue.

BTN.com: So how did you guys get involved in the baby race?
C: There?s a group on Facebook for mothers in DC. And I saw the ad came up, and Theo?s always been very speedy, so we thought we might as well and see what happens.

BTN.com: So you knew he had a good chance to win, then?
C: We thought he might get a bit shy, but he surprised us. Especially because he clapped when he won. He?s not shy.

BTN.com: Did you guys know Purdue won the Big Ten title in basketball?
T: Oh, really? I didn?t know that. That?s obviously good luck. Maybe he?ll end up at Purdue as a student one day, who knows?

BTN.com: Does the win make it more likely that you?ll send him to Purdue down the road?
T: Well, I know when I was a kid my parents got me a University (of Oxford, in England) top. And I ended up going there. So this is his first university T-shirt. Could be a sign.

BTN.com: Which one of you did he inherit the athleticism from?
C: (Laughs) Well, I won a high-jump competition in school.
T: And I used to do a lot of cross-country, so I think it?s me, actually.

BTN.com: You guys can agree to disagree on that. Did he do any training for the race at all, or did you just throw him in there?
T: We just threw him in there. He loves chasing me around the kitchen, so we knew if we could get him to concentrate he?d do well.

BTN.com: This has got to be a good sign for Purdue?s chances this weekend, right?
C: Has to be. Theo will be watching. In the shirt.