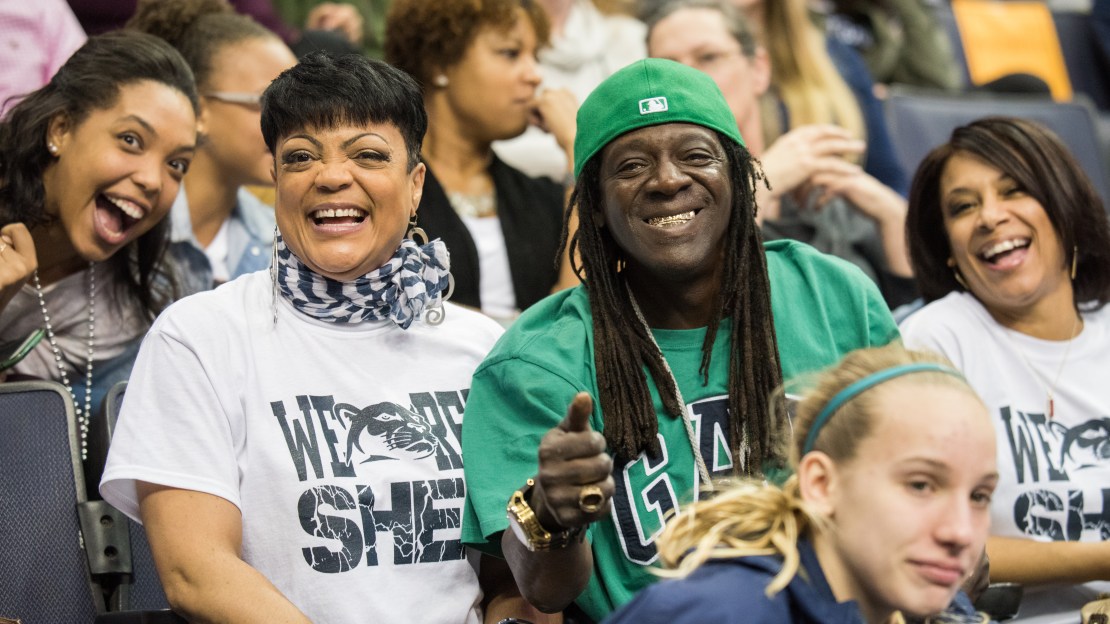 WASHINGTON — If you?ve watched any Penn State basketball the last three seasons, you might have noticed (or heard) the unrelenting support from one of the program?s biggest fans.

Kim Pinder-Garner is junior Shep Garner?s mom, and she?s been a fixture behind the bench at nearly every Penn State hoops game since her son joined the team. If you see a woman in customized Nittany Lions T-shirts leading ?We Are!? chants, shouting nicknames for each player and keeping referees on their toes, it?s definitely Kim.

She?s even sang the national anthem before Penn State basketball games and has caught the attention of national TV cameras.

Kim was gracious enough to agree to a Q&A during No. 13 seed Penn State?s 76-67 OT win over No. 12 Nebraska in the opening game of the Big Ten Tournament Wednesday.

BTN.com: How many games do you make it to per season?
K: I only miss three at the most. This year I?ve missed three, last year I only missed two. Home and away.

BTN.com: You seem to get pretty into the games. Who would you say you?re harder on, your son or the referees?
K: Woooo. Definitely the referees. They all have nicknames. Like, ?Come on, ref with the sunroof.? ?Come on, Mr. One-Leg-Longer-Than-the-Other ref.? ?Come on, short ref.? That?s my thing.

BTN.com: I noticed you have nicknames for the players, too.
K: Mike (Watkins?) name is Chocolate Thunder. Julian Moore is Juju. (Isaiah Washington) is Zeke. Shep is actually puppy. My husband?s name is Shep-dog, so we call him Shep-pup.

BTN.com: Is that how your son got his name?
K: Yes. Shep-pup. Who else is on the team? Tony (Carr) is Big Tone. Oh, and Lamar (Stevens) is The Animal.

BTN.com: I heard you can sing a little bit.
K: I sing a lotta-bit.

BTN.com: You think you can get out there for the National Anthem on short notice?
K: Anytime. I?m a professional singer. I?m always ready.

BTN.com: You?ve got a background in music, right?
K: I?ve been singing for 20 years, professionally.

BTN.com: And I see Flavor Flav is here supporting Penn State. What?s your connection with him, exactly?
K: We?re actually second cousins. He didn?t make any regular season games this year, so he made sure he came down for this one. He usually makes about four or five a year. He?s like my bruh-zin. Like brother/sister cousins.

BTN.com: Who came up with the slogan on your T-shirt? ?We Rep Shep,? was that your idea? And do you wear that to every game, or switch it up?
K: Yes, and I switch up. Big Shep (was one.) I put a basketball and (his number) 33 on one last year. This year, all the kids from Roman (High School in Philadelphia, where Shep, Tony Carr, Lamar Stevens and Nazeer Bostick all went) are my family, so I love them all and they?re all like my kids. So this year I had to make sure I said, We Rep Shep.

BTN.com: Give me a prediction here. How far are you guys going to go?
K: Don?t do that. Don?t get me in trouble. You want me to lie or tell the truth?

BTN.com: Tell the truth!
K: Shep is hurt. He hurt his foot. When you see he?s not hustling, it?s because something?s wrong with his foot. But he?s out there with heart and guts. These guys are soldiers, so I see us going to Friday, but I really wish it would be more. I?m just being honest. We?ve got animals out there, though, who can will us to a win.