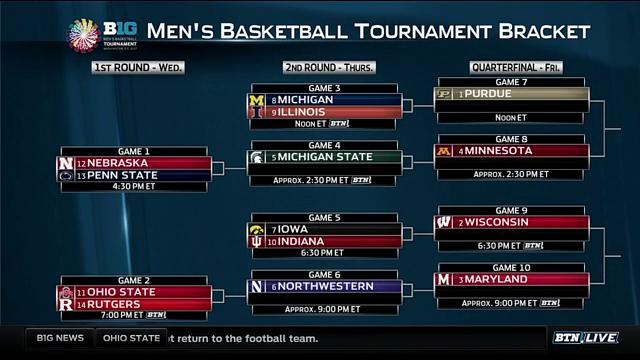 The Big Ten tourney kicks off on Wednesday with two games, as No. 12 Nebraska takes on No. 13 Penn State along with No. 14 Rutgers battling No. 11 Ohio State. An automatic bid to the NCAA tourney will be on the line in Washington, though it looks like Purdue, Wisconsin Minnesota, Maryland, Michigan, Northwestern and Michigan State already have bids locked up and are just jockeying foe NCAA seeds.

Here are some things to look for as the 20th Big Ten tourney preps to kicks off.

Seeded too high: No. 6 Northwestern. Here is a dirty little secret no one mentions in the hysteria surrounding the Wildcats surge to their likely first-ever NCAA bid: They are 3-6 in their last nine games. And one of those wins was in Evanston vs. last-place Rutgers. And it took a miracle play to beat Michigan in another victory. Bottom line: NU landed at No. 6 but the Cats aren't humming as March Madness begins. Northwestern will take on the winner of No. 11 Ohio State vs. No. 14 Rutgers on Thursday. Win that, and the Wildcats would meet No. 3 Maryland.

Seeded too low: No. 8 Michigan. The Wolverines are a dangerous team because of senior point man Derrick Walton, Jr. He is a smart, tough leader, the son of a coach who can do it all. In fact, he?s the only player in school history with 1,000 points, 500 rebounds and 400 assists in his Michigan career. Walton is surrounded by an array of talented shooters in Zak Irvin, Moritz Wagner, D.J. Wilson, Muhammad-Ali Abdur-Rahkman and Duncan Robinson. The Wolverines open on Thursday vs. No. 9 Illinois. Beat the Illini, and Michigan will take on No. 1 Purdue, a team it clobbered 82-70 late in the season. The Wolverines are a dangerous team that went 6-2 in its last eight games with the losses coming at Minnesota and at Northwestern.

You don?t want to play this team: No. 4 Minnesota. The Golden Gophers saw their eight-game winning streak end at Wisconsin in their season finale. No worries. Richard Pitino still has a deadly team that is more than capable of winning the school?s first ever Big Ten tourney title or at least reaching the title game for the second time (2010). Junior point man Nate Mason is an electric talent who stirs the drink in Dinkytown for an array of studs like Amir Coffey, Jordan Murphy, Dupree McBrayer, Akeem Springs, Reggie Lynch and Eric Curry. Minnesota is long, athletic, smart, tough and talented. And it?s well-coached.

Lots on the line: No. 9 Illinois. The Fighting Illini have missed the last three NCAA tourneys under John Groce, last dancing in 2013. The school hasn?t missed four tourneys in a row since a 16-year gap between 1964-1980. Illinois (18-13 overall; 8-10 Big Ten) finished strong, winning four in a row before losing at Rutgers in the finale. Still, the Illini are a bubble team that?s among the ?last four out? of the latest NCAA field projected by Jerry Palm of CBSSports.com. Like Illinois, Iowa (18-13 overall; 10-8 Big Ten) is another team that will try to play its way into the NCAA tourney. Like Illinois, the Hawkeyes finished strong, winning their last four games.

Best chance for an upset: The winner of the No. 12 Nebraska vs. No. 13 Penn State game on Wednesday could knock off No. 5 Michigan State on Thursday. Both the Cornhuskers (Tai Webster) and Nittany Lions (Tony Carr) have good point guard play, which is key. Plus, both Nebraska and PSU will play loose, as neither has anything to lose. But neither is playing well, as the Huskers lost their last four and Penn State lost its last five games. Michigan State has struggled for consistency all season, thanks mostly to youth and injury. The Spartans lost their last two games and three of their last five. MSU could be ripe to be knocked off.

Best chance to be upset: No. 2 Wisconsin. The Badgers struggled down the stretch, losing five of six before finishing with a home win on senior night vs. Minnesota. The late-season slide cost the Badgers a shot at the Big Ten title. Is Wisconsin back on track? This is a team that struggles for offensive consistency, and it has major issues at the free-thrown line, too. Seniors Nigel Hayes and Bronson Koenig need to buckle down and play with urgency, along with super sophomore Ethan Happ. On Friday, Wisconsin will play the winner of the No. 7 Iowa vs. No. 10 Indiana game. Both are talented and dangerous.