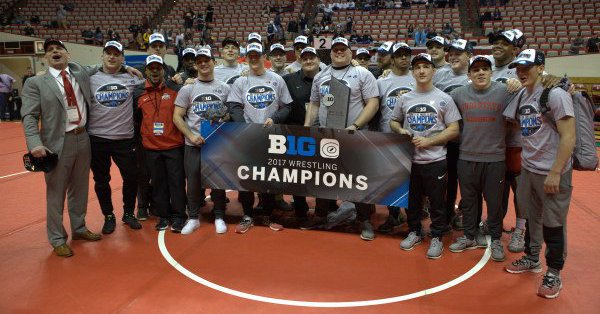 Penn State finished in second place with 130 points, followed by third-place Iowa with 112.5. Nebraska finished in fourth place with 102.5 points and Minnesota rounded out the top five with 93 team points.

Iowa?s Thomas Gilman won the 125-pound title. Gilman, the No. 1 seed, earned a 4-0 victory over No. 3 Tim Lambert of Nebraska for his first title. At 133 pounds, No. 1 Tomasello of Ohio State posted a 5-4 win over third-seeded Cory Clark of Iowa to win his third Big Ten Championship.

Top-seed Anthony Ashnault earned his second-straight Big Ten title after defeating seventh-seeded Javier Gasca III of Michigan State with a 15-2 major decision to claim the 141-pound title. The 149-pound crown went to No. 1 Retherford of Penn State, who earned a 16-1 technical fall over Ohio State?s Micah Jordan, a No. 3 seed, en route to his second-straight Big Ten title.

At 157 pounds, No. 1 seed Nolf of Penn State claimed the win over second-seeded Michael Kemerer of Iowa with an 8-2 decision to earn his first title. Illinois? Isaiah Martinez, the top-seeded 165-pound wrestler, posted a 10-4 decision over Michigan?s Logan Massa to win his third-consecutive conference title.

Second-seeded Moore of Ohio State won the 197-pound title, earning a 15-11 decision over No. 1 Brett Pfarr of Minnesota. Rounding out the group of individual Big Ten Champions was No. 1 Kyle Snyder of Ohio State, who claimed an 8-5 decision over second-seeded Connor Medbery of Wisconsin. This was Snyder?s second-straight conference title and with the victory, Snyder becomes the first Olympic Gold Medalist to subsequently win a conference title in NCAA wrestling history.