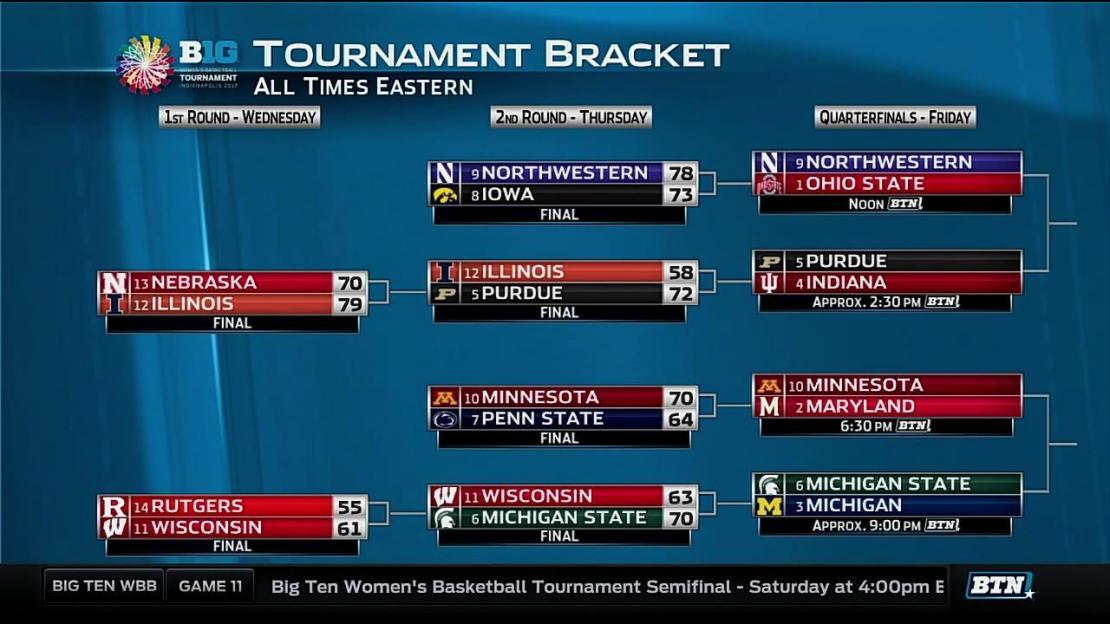 (AP) Kelsey Mitchell made six 3-pointers and finished with 27 points to lead No. 9 Ohio State to a 99-68 win over Northwestern in the quarterfinal of the Big Ten Tournament on Friday.

Kiara Lewis, Shayla Cooper and Alexa Hart each scored 11 points for the top-seeded Buckeyes (26-5), who have won a season-high 12 straight games.

Nia Coffey had 21 points and Ashley Deary finished with 13 points for the Wildcats (20-11), who shot 36 percent and committed 21 turnovers.

(PurdueSports.com) The fifth-seeded Purdue women's basketball team rallied from 17 points down early in the third quarter to knock off fourth-seeded Indiana 66-60 in the quarterfinals of the Big Ten Tournament at Bankers Life Fieldhouse on Friday. The Boilermakers outscored the Hoosiers 42-21 in the second half and came back behind a career-high 24-point effort from freshman Dominique Oden.

INDIANAPOLIS (AP) Shatori Walker-Kimbrough made six 3-pointers and scored 28 points as No. 4 Maryland advanced to the Big Ten Tournament semifinals with a 92-80 victory over Minnesota on Friday.

Kaila Charles added 15 points and Brionna Jones had 14 points and 13 rebounds for Maryland (27-2), which hit 11 3-pointers and scored 28 points off 19 Gophers turnovers.

Destiny Slocum scored 13 for the Terrapins, who will play Michigan or Michigan State in the next round Saturday.

Mardrekia Cook snapped a tie with the first basket of the second quarter and the Spartans led the rest of the way. They were up by 16 early in the second half before an 8-0 run got the Wolverines within nine with a minute left but no closer.