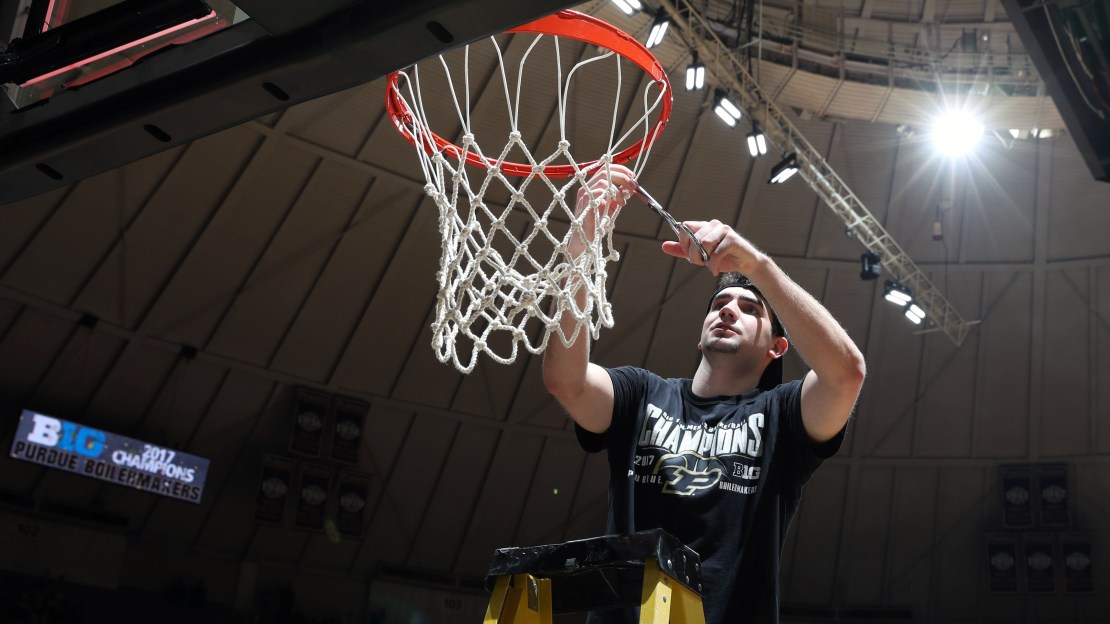 (AP) No. 16 Purdue celebrated the perfect party on Senior Night.

Players danced around in black-and-gold confetti as the fans sung "We Are the Champions." They climbed ladders and cut down nets. And they did it all by dethroning the defending Big Ten champs.

Dakota Mathis scored 17 points in the first half, Caleb Swanigan matched that total in the second and the Boilermakers pulled away from foul-prone Indiana for an 86-75 victory Tuesday night to clinch a share of the conference crown and the top seed in next week's conference tournament.

"Being able to knock off your rival at your home court for a Big Ten title is unbelievable," Vince Edwards said after scoring 15 points. "It's been awhile since they came here so we knew Mackey would be special tonight."

The game went almost exactly according to Purdue's script.

After getting the outside help it needed over the past few weeks, the Boilermakers (24-6, 13-4) won for the seventh time in eight games and broke a tie with the dreaded Hoosiers to claim a record-breaking 23rd conference crown.

Swanigan finished with 21 points and 10 rebounds for his 24th double-double of the season in what could have been his final home game. The sophomore dominated the middle after Indiana's top two centers, Thomas Bryant and De'Ron Davis, were both called for their third foul less than 4 minutes into the second half.

Mathias scored 13 points during a crucial 19-6 first-half run that erased Indiana's only lead of the game and turned a 17-14 deficit into a 33-23 lead. Mathias finished with 19 points and seven rebounds.

James Blackmon Jr. led the Hoosiers with 16 points. Josh Newkirk and Devonte Green each had 13.

But the Hoosiers couldn't capitalize on their chances.

After cutting a 15-point first-half lead to four early in the second half, Purdue quickly rebuilt a 10-point lead. And after closing to 57-51 with 10:07 to go, Purdue answered with seven straight and never let Indiana seriously challenged again.

"We're a different team than what we were last year," coach Tom Crean said. "Caleb is hard to guard. It's tough."

Indiana: The complaints may grow even louder now after last year's Big Ten champs were swept by Purdue and then endured the indignity of being caught up in the postgame celebration. The worst part – Indiana's fading NCAA Tournament hopes took another hit.

Purdue: While the Boilermakers took care of the most immediate business, they are already looking to bigger and better goals.

Bryant went to the bench with his third foul 86 seconds into the second half. Davis followed that by drawing three fouls in a 47-second span, giving him four with 16:32 to go.

That prompted Crean to go with the sparingly used Tim Priller, who was called for four fouls in the next 5 minutes. Starting forward Freddie McSwain Jr. also finished with four fouls. Bryant and Davis both fouled out, but Crean didn't complain.

"I don't coach the officials. I coach Indiana," he said.

Purdue students couldn't wait to get into this game, so they started lining up hours before tipoff.

Ninety minutes before game time, the pedestrian areas around Mackey Arena were overflowing with bodies – a scene security guards and longtime observers said they had not witnessed in years. When the gates did finally open, 60 minutes before tipoff, they streamed in so quickly that the reserved student section was filled within 15 minutes.

Over the next 2 hours, they kept at it – booing the Hoosiers and taunting them with chants of "N-I-T."

"(The fans) were waiting for it," Edwards said.

Purdue: Will try to capture the outright title at Northwestern on Saturday.