Power Rankings: Minnesota ascends to No. 2 in Jon Crispin's poll 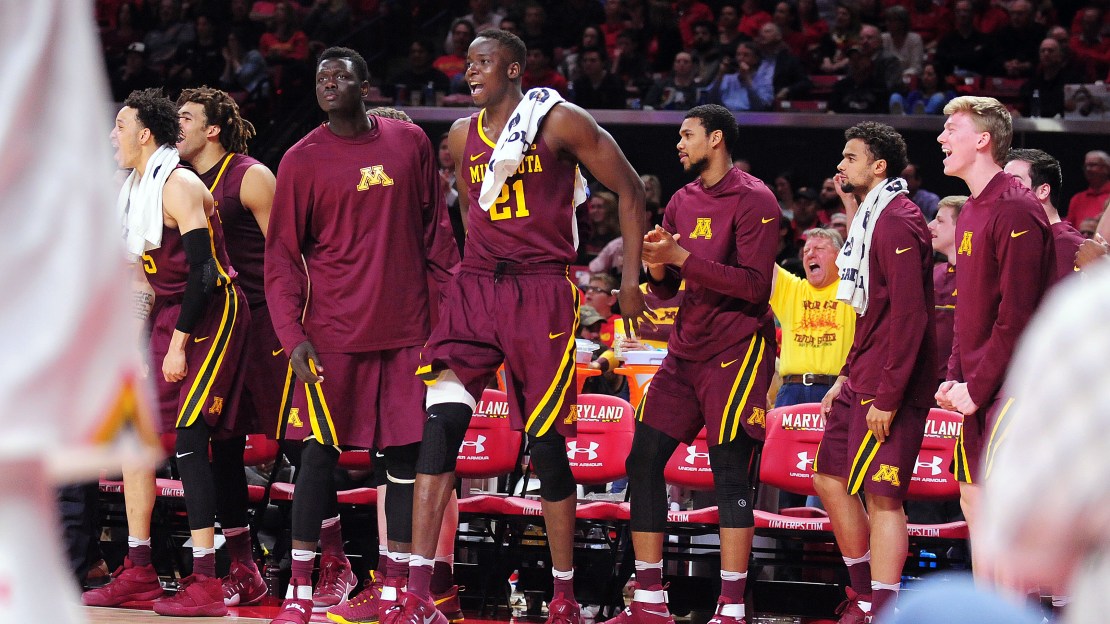 Here's what I've got as we enter the final week of the regular season.

1. Purdue (23-6, 12-4). Regardless of the loss to one of the hottest teams in the conference in Michigan, the Boilers are still my Big Ten torch-bearer in the NCAA tournament. Like Wisconsin with Ethan Happ, Purdue has to have an answer when teams commit so much effort and attention on its star. Vincent Edwards may be the biggest key down the stretch. He could be the answer.
Last week: 1

2. Minnesota (22-7, 10-6). It's impossible to ignore Minnesota, particularly when Jordan Murphy is racking up double-doubles on the regular and Reggie Lynch is able to stay out of foul trouble. Lynch's 11 blocks and zero fouls vs PSU looked like a box score typo. Everything is coming together at the right time for Richard Pitino and crew. They are clearly one of the best teams in this conference, and still are rising.
Last week: 6

3. Wisconsin (22-7, 11-5). The Badgers are clearly struggling, but I am confident that this experienced team will do what they have to do to gain momentum heading into March. The Sunday matchup between the Badgers and the Gophers is beginning to look like one of the most important games of the conference season. Not just for the teams in the game but also for those fighting for position in the conference standings. Nigel Hayes, Ethan Happ and Bronson Koenig all have to be good for this team to play to their potential.
Last week: 2

4. Maryland (22-7, 10-6). It's impossible not to think that the young Terps have hit a bit of a wall. Not only do the legs get heavy in February, teams know your tendencies and potential much better after seeing you play or after facing you. I feel as if it's gotten difficult for the young freshmen, and they've got to figure out a way to dig deeper and fight even more. Melo Trimble has been terrific, but he's got to bring everyone with him and maximize the potential of his young core. The ceiling is still very high. It'll come down to getting that swagger and confidence back first.
Last week: 3

5. Michigan (19-10, 9-7). I can't ignore the fact that the Wolverines are up there with Minnesota as one of the hottest teams in the conference. They look unbeatable, at times, especially at home, and their ability to shoot the three from any position can rip the heart out of a defense's chest. It's almost as if it took them half the season to believe how good they could be. Once that happened, though, they have become a legitimate contender, to the point that it's impossible to imagine an NCAA tourney field without them in it.
Last week: 7

6. Michigan State (18-11, 10-6). If the Spartans can continue to play with purpose the way they did against Wisconsin and take care of business at Illinois on the road, there's no question as to whether Tom Izzo will make his 20th consecutive NCAA tournament. This is a dynamic and dangerous team, and it seems to be enjoying itself once again. Side note, if you didn't tear up or get a lump in your throats when Eron Harris got the opportunity to kiss center court after suffering a season-ending knee injury, you might want to check for a pulse. That inspiration seems to be driving the Spartans.
Last week: 5

7. Northwestern (20-9, 9-7). As much as we all want the Wildcats to make their first NCAA tournament, close losses and some bad losses are putting them on the bubble. Every year, it seems as if the 7-spot in the conference is a bubble team. Northwestern only needed one win in its last four conference games, in my opinion, to secure an at-large bid. Now it appears to come down to matchups against Michigan and Purdue. This could be one of the most-watched/followed stories in the Big Ten this week.
Last week: 4

8. Iowa (16-13, 8-8). If you're a Hawkeyes fan, you've got to live with the ups and downs this season, thanks to so much youth playing major roles. But if you're like me and like to view the glass as half-full, you should be extremely excited about this team. It'll be interesting to see how the Big Ten Tournament matchups shape up as Iowa may be one of those dangerous teams, one that has shown it can beat anyone. If perimeter shots are falling, look out.
Last week: 9

9. Indiana (16-13, 6-10). Despite the struggles the last few weeks, the Hoosiers are not far off from being a contender and a serious threat down the stretch. Going back to the Wisconsin game on Feb.5, the Hoosiers have lost a number of close games that would have kept them in the conversation. At this point, the key will be to minimize careless turnovers and play with a sense of urgency for every remaining minute of the season. Injuries have certainly been the story, but the potential is still there for this team to make a run that will keep the injuries from defining its season.
Last week: 10

10. Illinois (17-12, 7-9). Since last season, I've been raving about the potential of this team, and it appears as if it's finally coming into its own and playing up to that level. John Groce's team is yet another Big Ten team that no one will want to face in the conference tournament in D.C., and with Michigan State visiting on Wednesday, the Illini still have a chance to spoil the tourney hopes of  a conference foe. I'll be on the call for that game and expect a good one. The matchup of the energetic and talented Leron Black and MSU's dynamic frosh Miles Bridges could be something to tune in for.
Last week: 12

11. Penn State (14-15, 6-10). Much like Iowa, this is a team Penn State fans should be excited about, and they shouldn't waste time jumping on the bandwagon. The talent is the best Happy Valley has ever seen, but they've got to find a way to function better together on the offensive end to find better shots, which will improve the poor shooting percentages. The toughness and perseverance through early season struggles comes directly from their coach Pat Cambers. His players are an extension of his personality on the floor.
Last week: 11

12. Ohio State (16-13, 6-10). Although the Buckeyes have looked much better, at times, it seems as if the 0-4 start to conference play was simply too much to overcome. Much like everyone else, I have mentioned this team is another reminder of how deep and competitive this conference is. C.J. Jackson has been a ray of light playing with great energy and finding more and more confidence on the floor. The Buckeyes seem to play with better energy and urgency when Jackson is at the helm. Additionally, if every Buckeye played at the level Jae'Sean Tate plays at, this team would be in the mix for a tournament bid.
Last week: 13

13. Nebraska (12-16, 6-10). As much as I like this team and think its ceiling is high, the Big Ten doesn't give teams many opportunities to breathe or find rhythm and confidence. The Huskers have a few great wins, notably at Indiana, at Maryland and against Purdue, but at 6-10 in conference and 12-16 overall, it's impossible to define this team by its good wins. You can see the potential is there, but finding consistent balance has been a challenge. But, as I've mentioned before, this is yet another team no one wants to face in D.C.
Last week: 8

14. Rutgers (13-16, 2-14). It is one heck of a compliment when every coach in the league raves about the progress that Steve Pikiell and staff has made throughout the course of this season. All I hear is one of the following: "Rutgers is really good." "They're close to breaking through." "Pikiell has done a fantastic job there." I agree with all of the coaches in the league and think Rutgers is on the cusp of taking a big step forward next season. Losing close games is a part of the process. It's how you learn how to win.
Last week: 14