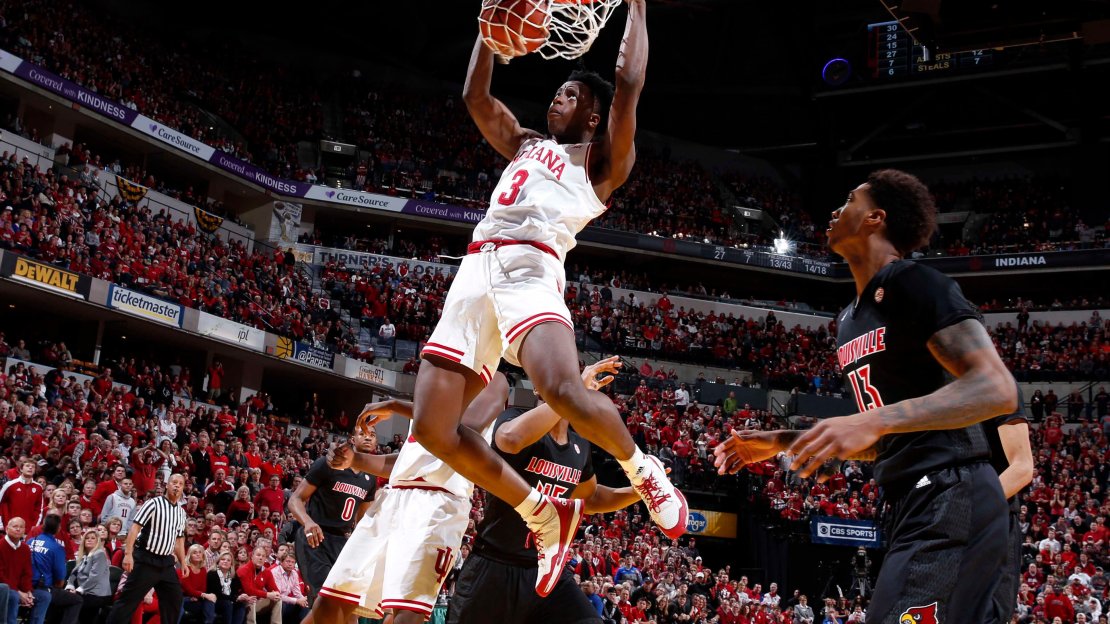 Injuries always play a big role during the course of a long season, and the Big Ten hasn't been spared. Some key players have missed time on several teams across the league. Here is a look at the most significant injuries in the Big Ten as we head to the finish line.

OG Anunoby, Indiana. A primo athlete, defender and rebounder, Anunoby was playing well for IU when he suffered a right knee injury in a 78-75 win at Penn State on Jan. 18. Anunoby was averaging 11.1 points, 5.4 rebounds, 1.4 assists, 1.3 steals and 1.3 blocks in 25.1 minutes per game. The Hoosiers were 13-6 overall and 3-3 in the Big Ten after the win at PSU. Now, Indiana has sunk in the standings in what has become a lost season just one year after the Hoosiers won the Big Ten.

Keita Bates-Diop, Ohio State. A challenging season in Columbus got even more daunting when the junior forward had to have surgery to repair a stress fracture in his left leg suffered just one game into the Big Ten season, and he's had to miss the rest of the year. Thad Matta said the hope is to redshirt the 6-7 junior this year, which would mean he'd have two more years of eligibility left after this season.

James Blackmon, Jr., Indiana. After missing the Big Ten season in 2016 with a knee injury, Blackmon was out for three league games this season with a lower leg injury. And the Hoosiers went 1-2 in the absence of their leading scorer. But even upon returning, the 6-4 junior hasn?t been able to turn the tide for IU, which has lost the four games he has been back. Indiana also has had to play all season without 6-7 Collin Hartman (knee), and Juwan Morgan missed two games with injury.

Michal Cekovsky, Maryland. The 7-1 junior big man broke an ankle last Sunday in a loss at Wisconsin. The Terps could have used Cekovsky on Wednesday, when they lost at home to Minnesota–a defeat that will make winning the Big Ten difficult. Maryland did well when he missed time earlier this season with a foot injury, starting 6-0 in the Big Ten with Cekovsky out. Damonte Dodd has to play at a high level, and Ivan Bender needs to play like he did vs. the Gophers (team-high 15 points) with L.G. Gill also seeing more time.

Bronson Koenig, Wisconsin. Greg Gard told reporters Koenig had been dealing with an undisclosed leg injury after a loss to Northwestern. Koenig had suffered his leg injury against Penn State, and it plagued him. He ended up missing a game at Michigan on Feb. 26, and the Badgers lost. Koenig came back the next game and led Wisconsin to a big win vs. Maryland.

Peter Jok, Iowa. There are few more dynamic players in the Big Ten than Jok. A back injury nagged him for some time, as he wasn?t himself in three consecutive losses at Northwestern (four points), vs. Maryland (14 points) at Illinois (10 points). The 6-5 senior then missed the two games, which Iowa won. Had he been healthy all season, maybe the Hawkeyes would be challenging for an NCAA bid.

Scottie Lindsey, Northwestern. It was killer for the Wildcats when mono took down the 6-5 junior and team's leading scorer at the start of February. After winning six consecutive games prior to Lindsey?s diagnosis, NU lost three of four during his absence. Even though Lindsey has played the last two games, he still hasn?t found his groove, notching six points in one game and two in another as Northwestern is 1-2 in its last three.

Ed Morrow, Nebraska. In January, Nebraska announced the burly sophomore forward would be sidelined indefinitely with a right foot injury. He ended up missing seven games, as the Cornhuskers went 1-6 in his absence. Oddly, the one game Nebraska won with Morrow out was vs. Purdue and its twin big men Caleb Swanigan and Isaac Haas. Go figure. Morrow came back Feb. 9 and has been a fixture since, as NU has gone 2-1.